SouthCoast Perspective on the DSEi Action

The South Coast had a contingent present at the recent succesful blockades of the DSEi Arms Fair held at the ExCel centre in East London. A critical mass bike ride left the Bank of England shortly after 9 o'clock and held up traffic throughout East London for 2 hours before managing to clog up one of the main roundabouts and routes to the ExCel centre. 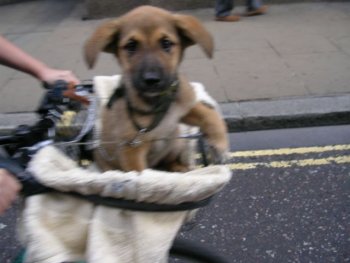 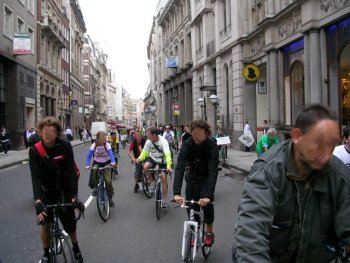 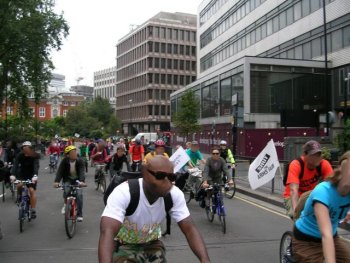 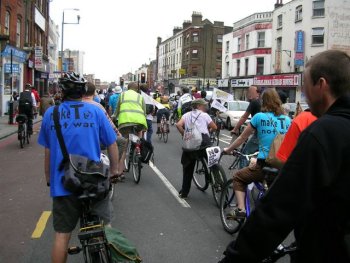 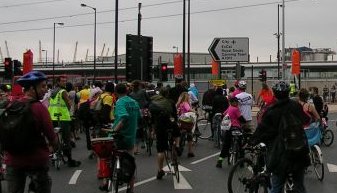 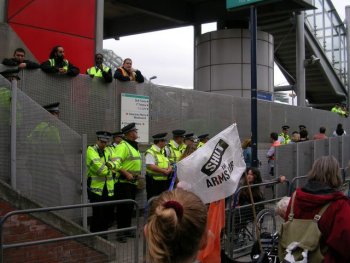 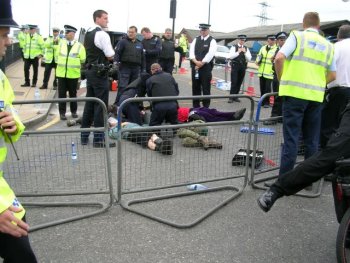 The bike riders then
joined the blockade of Custom House station. Whilst many were thwarted in
their attempts to blockade the station from the outside and from the trains
themselves, several activists managed so stop the trains completely by
getting on the roof! The Metropolitan and City of London Police's
multi-million pound operation to ensure that Arms Dealers can trade weapons
of terror, torture and murder then had to switch tactic to bussing delegates
in from Canning Town station. A group of people managed a successful lockon
protest on a major flyover leading to the event whilst the cyclists joined
ranks with the predestrian protestors to dance in the road for a good half
hour or so. The Met got heavy handed on a few occasions, but generally
appeared to be tactically confused. The thirty or so bike riding coppers
ended up having to use their bikes as weapons and shields to protect
delegates when the demo switched focus to the main road entrance........