Thousands of people crammed into the London Voluntary Resource Center in Holloway Road for the 22nd annual Anarchist Bookfair on Saturday 22 October. As usual people came together to buy and trade books, films, t-shirts, stickers, gossip, and new directions for the anarchist movement in Britain and beyond. About three dozen meetings and seminars took place throughout the day, on subjects such as precarious labour conditions, no-borders and migration issues, anarchism in film, housing co-operatives, and the proposed National ID card scheme.

After the bookfair had ended, a small incident took place in a pub nearby. As a result, large numbers of police arrived at the scene pushing and kicking anyone that was in the street, thus escalating the situation. Additional riot police quickly moved in, closing off to southbound traffic for more than 40 minutes, which caused huge disruption in the area. During the fray, an Indymedia photographer taking pictures was knocked to the ground, handcuffed, and arrested. He and the other 6 detainees were finally released on bail on Sunday evening after spending around 24 hours in police cells. [Call for eyewitness statements, video and photographic evidence] 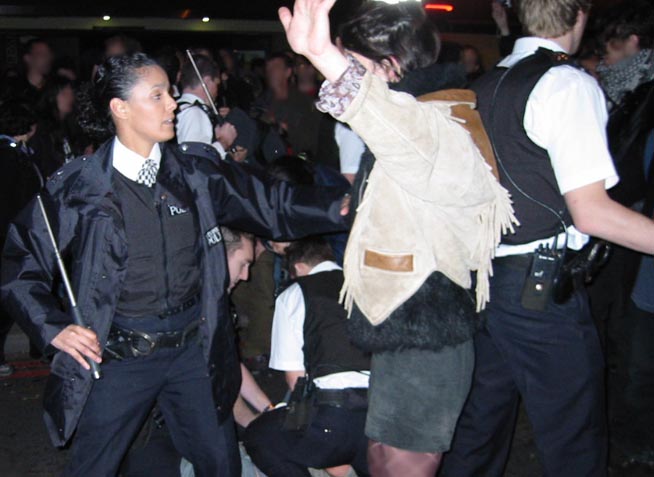 As the bookfair ended, many people went for a beer at the Coronet pub down the street. At about 6:20, some people began playing music on a small portable sound system inside the pub. After a while, the music went off, then back on, then off again. This not only annoyed the bar management which immediately said that there would be no more beer until the music was shut down, but it also antagonised many people that had attended the bookfair for being a meaningless and selfish action. Eventually, the police arrived outside. Management went round the pub, informing people that they were closing on police advice. At 7:00, about 8 police officers confronted people as they left the pub, arresting a person who had had a little argument with one of them. As the crowd attempted to de-arrest the person, about 10 vans full of riot police, plaincothes and regular uniforms, with some additional cycle cops, arrived at the scene whilst baton-charging down Holloway Rd, beating people as they went.