"...it's a friday night, it's like a fucking party, it's like an RTS on bikes!"
Cyclist from Birmingham

Friday, Oct 28. Almost 1000 cyclists soon growing to a critical mass of an estimated minimum of 2000 cycled around central London. The meeting point was nearby the restricted SOCPA zone in front of the National Film Theatre. The CM moved on to Parliament Square and Downing Street. The samba band was on wheels for the occasion and many were in Halloween attire.
Pics [1 | 2 | 3] Pic-reports [1 | 2 | 3] Reports [1] Video reports [1 | 2]

This is the first London Critical Mass ride after participants were informed about possible arrests at future Critical Mass rides. The Metropolitan Police demanded that the 'organisers' give notice of the route in advance [report].

Solidarity rides are taking place simultaneously in Bristol [more] and Brighton, Nottingham, Leeds and Gothenburg. We are collecting updates from the London streets in a timeline. 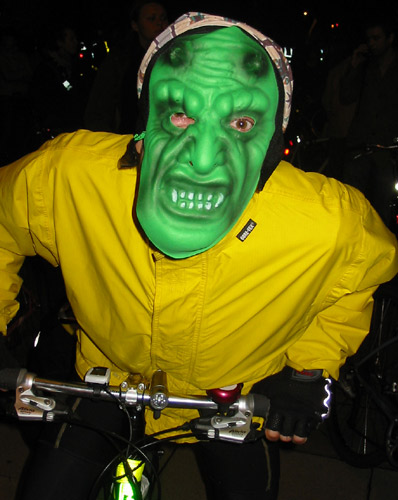 The Serious Organised Crime And Police Act 2005 was brought in to ban demonstrations within a one mile radius of Parliament, and to remove the very embarrising presence of Peace Activist Brian Haw. It has been defied on a number of occasions since it was introduced this summer with arrest and demonstrations. Background [1 | 2 | 3 | 4]

And here is a copy of rikki's report on the night:

It's not over till they retract the letter

The letter has not been retracted, CM is still under threat, there has been no 'climb down' we have not won yet.

It was great to see so many people out on the ride last month, the ride was slow because people acted like sheep and stood around at every junction waiting to be told what to do, rather than leaving those who wanted to bait cars and cops to it and pushed through to join the front of the ride.

This is not however the end, but don't ignore the threat, there is even more reason to build up numbers for this Friday 25th Nov, the cold weather will cut numbers, and those of us out to defend our right to ride will be no less likely to be hassled by the police than last month.

So don't celebrate too soon, get out there, wrap up warm and stick with the mass.

http://lists.riseup.net/www/arc/cm-london/2005-10/). They feel it was too slow (we were not traffic as we were not moving), disorganised and some people were spending too much time pissing off drivers.

I am really sad that this is happening as these people seem to have been at the heart & soul of the London CM in the past few years. However, I don't understand why they think that CM should be more organised. What is great about CM is that it teaches you patience, that not everything in life needs to be organised and sometimes when it is not it can be fun. CM is relaxing because it's different from our everyday lives in London which are usually planned out to the minute. It's great that drivers are also taken on this journey (although not voluntarily). Especially those cabbies who think it's really charming that they drive like idiots and risk cyclists' lives every day.

I loved it last night. Because we showed the power of how many will fight stupid regulations authorities are trying to impose (like banning Critical Mass ). CM has been here for 11 years. Those in power have succumbed to their own paranoia and now view ordinary citizens as enemies in their 'war on terror'.

I am so pleased that London resisted the repressive move of the authorities. It reminded me of Serbia under Milosevic's dictatorship (from where I fled to live here in the UK capital). Let the people be.

New Scotland Yard's threat of making outlaws of cyclists came completely unstuck in the face of the peddle power of over 1, 000 unintimidated citizens at October's ride last night.

No one had given prior notice that they might wish to cycle within the "designated area around Parliament" and yet so many people coincidentally arrived outside the House of Commons. Every individual taking part was supposedly, according to police, committing an offence and liable to arrest.

The lack of police action on 28 October underlined forever that the Met's insistence that "cycle protests are not lawful because no organiser has provided police with the necessary notification" has no meaning at all. Participation in Critical Mass events in future cannot credibly now render anyone liable to prosecution for simply being involved or journeying through a "designated area".

Any future attempt to resuscitate such a threat is completely empty given the public defiance of Critical Mass London clearly 'demonstrated' that this will not be tolerated.

Congratulations to everyone that participated in winning the total climbdown.

I enjoyed Critical Mass very much as ever, and have written an account here:

http://navarino.org.uk:8080/blog/1130650542/index_html. I don't agree the mass got to much more than a thousand in contrast to your report. The pace was slow and once it was clear our civil liberties were not (at least on this occasion) threatened, quite a few must have peeled off for more enjoyment elsewhere. I must say I was thoroughly bored of the sluggish pace of the mass by the time I rode south from Parliament Square about eight. I thought it was a bike ride! What's all this lounging about? Plenty of time for a picnic later!

The National Film Theatre is not inside the Exclusion Zone. On the South Bank the Zone ends at Hungerford Bridge.

Because we care about these things. We stopped at the front of the ride and counted as close as possible to come up with an accurate figure. We counted 1151 people on bikes or on foot, skates etc.
Many thanks

One of the points of critical mass - there are many - is to slow up the Other traffic so the streets
become quiet and peaceful even if only for a few minutes. It should never go faster than walking speed because:

1 There are often walkers along with cyclists

2 The people at the back get cut off by traffic lights and can't catch up. Then cars get in between and it all gets dangerous and frustrating.

3 It is inspiring to see the busy world slow down and have fun for a while.

4 Most important it shows what London might be like without private cars. We won on the north side of Trafalgar Square - now lets reclaim the rest!