In what seems to be a continuation of last month's violent events in Lozells, Birmingham, between 35 and 45 Muslim grave stones have been smashed and pushed over in nearby Handsworth Cemetery. 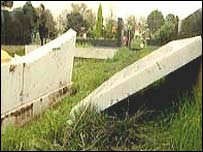 The desecration was discovered on Friday morning, 4th November, by relatives visiting the Muslim part of the cemetery, as a tradition of the Muslim Eid.

Leaflets, with insults against Muslims, were also scattered. They were attributed to a group calling itself Black Nation. Roughly photocopied, the message seemed to refer to the so-far unsubstantiated rape rumour which led to the riots last month.

The police said the desecration is being treated "as racially aggravated criminal damage." The leaflets have been cleared away and will be forensically examined by the police.