Apologia of barbarity from the left intellectuals.

“The state is a coldest of all monsters“
Fr. Nietzsche.
The publication on the Internet the staff of a public execution of criminals in the Peoples Republic of China has caused ambiguous comments from readers. 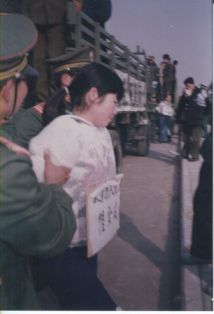 “The state is a coldest of all monsters“
Fr. Nietzsche.

The publication on the Internet the staff of a public execution of criminals in the Peoples Republic of China has caused ambiguous comments from readers. Some people support this disgusting method of punishment, others fairly consider its as deeply vicious and the certificate perversity of Chinese society. We know, that in China there is such barefaced barbarity. But for us was unexpected, that the known "left" resource - the central site of the most powerful party of the country - KPRF.ru , has published a note in which actually justifies this monstrous action.

In the justification of punishment authors give some reasons. Historical arguments – the opium dependence of Chineses provoked by foreign colonizers, psychological arguments – “It is an attempt to prevent the future crimes by showing horror of punishment “. At lasts a usual vulgar method of the justification of the state cruelty by means of attraction attention to depth of fault of the criminal. But for what all this arguments? What is the maximum justification of cruelty for authors of site Forum.msk? They unambiguously declare, that as such justification for them “ interests of statehood ” serve. They sacrifice humanity and progress of human culture for “great state“ idol. They secretly dream of empire and intimidate the audience made a fool by great-power education: “It needs to be shown. It is necessary to look at it. Because if with us there will be something similar to volume that has occured to China more hundred years ago, we will not rise any more...”

Following this reason, left intellectuals caring of “public morals“ and majestic interests reproduce on the site some stages of cruelty, thus at all not having supplied their any prevention.

Needless to say, that masking under a mask "left" journalists do not trouble themselves even with a hint on the marxist approach to this problem. In fact they risk to be not understood “a wide reader's audience “, simply speaking to spoil themselves political business, to lose in “the political market “ their capitalization.

We are not political businessmen, but Marxists. And it is necessary for us to bring an attention to the question on China precisely and clearly. Not fruitless conversations on great culture and great statehood, but essence of the class nature of the Peoples Republic of China – here that for us a primary factor. And for all consecutive Marxists it is obvious, that over China is dominated with economic environments of capitalism above that the political superstructure in the form of a totalitarian bureaucratic despotism towers. Therefore we do not admire, but we convict and we shall convict this vicious system. Besides danger consists that China in the today's world is aggressive imperialistic power. “The median empire“ rather resembles the Second Reich. However fruits of policy Wilhelm II can seem children's game in comparison with results of claims Peking Governors on world supremacy.

The position of authors Forum.msk is completely opposite to ours also because it, as well as many displays of depressive culture of rotting capitalism, goes counter with the main string of progress of human culture. In the Europe we had public executions – quarterings, burnings on a fire, etc only two or three centuries ago too. But the legal method of intimidation never was effective way of struggle against criminality. Roots of criminality - in the essence of a class society. Progress of a civilization has appreciably finished with this barbarity – in many countries not only public punishment, but also the death penalty is not supposed by the law. Great achievement of a western civilization is such change of public consciousness that guarantees that intimidation will cause more likely de-legitimate the state applying it as punishment and prevention of criminality. However a part of the society - enraged for horrors of capitalism petty bourgeoises and lumpens sing of cruelty and violence. We should make everything to protect from them culture. We should make everything that the world has not fallen in abyss of new barbarity!