PREPARE TO DEFEND THE PEOPLE OF IRAN FROM A NUCLEAR ATTACK!

There is, at present, an ominous silence from the UK Anti-War Movement about the dangers of a Nuclear Attack on Iran by the USA and Israel. 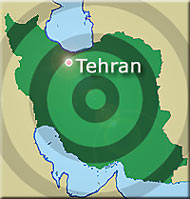 PREPARE TO DEFEND THE PEOPLE OF IRAN FROM A NUCLEAR ATTACK!

It is not my wish to act like a doomsayer or to alarm anyone unnecessarily. In the dark times we live that would be a cruel and unforgivable thing to do.

The western countries have, in the most cynical fashion, chosen to demonize and persecute the Islamic world, to turn it into a new "menace" (now that the "Red Menace" no longer exists) in order to justify to their peoples a state of "permanent war". It is a very frightening situation in which we are now but very few are aware of what the warmongers are preparing. In my opinion, and in the growing awareness of many others, the new 21st Century imperialism we now face is already just as bad as the nazism of Hitler's Third Reich.

Some of you will know that the gangster regime presently running the USA is now planning, along with the cooperation of NATO (including the UK) and Israel, a pre-emptive (first strike) attack on Iran. This attack will probably be to destroy Iran's nuclear reactors and air defences. Most of these defence systems are buried in hardened shelters, deep underground. They are built specifically to withstand the heaviest assault by conventional weapons so what the US intends to use against them are so-called 'tactical mini-nukes', nuclear missile warheads of an explosive yield of anything between half to four or five times the size of the bombs dropped on Hiroshima and Nagasaki.

These mini-nukes are intended to pierce the earth before exploding. Not only would such weapons leave huge open craters but they would still cause immense devastation to the surrounding area. It is impossible to believe that such devastation will not spread into civilian towns and cities. Moreover, massive radioactive clouds will blow across the planet carrying deadly radiation to many other countries. The annual monsoon weather could carry radioactive clouds south-eastwards and this could mean Pakistan, India, Sri Lanka and parts of SE Asia will be affected.

I find the prospect of such a thing happening so horrific that these days waking every day feels to be entering into a nightmare world. But a nightmare world is precisely what these madmen have created. It is time that all sane, decent folk stand up against this unspeakable insanity and say, "Enough! Stop!"

You would think that organizations in the UK like the Stop the War Coalition and CND would be working 24/7 to alert the people of the UK to this serious danger. But they seem to be so shocked by the terrible belligerence of Washington DC's war-makers that they have turned into so many tiny rabbits being mesmerized by a great cobra. At the moment, all we are hearing from the Anti-War Movement is an ominous silence. This silence needs to be broken and broken now. A lot of time has already been wasted. Let no one waste another second.

That is why I am now appealing to you. At the moment, it appears there are only a few individuals who are ringing the alarm-bells. But everything starts in a small way.

Speaking to you from my heart, I have every faith in the tremendous potential of human communities everywhere to work for Peace and the New World that is surely coming. But time is running very short. The proposed attack on Iran is in March 2006.

There isn't very much time. But instead of being paralyzed by fear and powerlessness think what you can do in the name of Mother Earth. And then do it!

For those who want more evidence that my warnings are not false, please consult the Medialens archive, BUSH/CHENEY, US WAR DOCTRINE & PLANS TO NUKE IRAN