Nottingham City Council has announced a new measure to reduce the 'problem of begging' on Nottinghams streets. A press release given out yesterday (Feb 27th) states: 'Nottingham City Council is urging members of the public to help them eliminate begging in the city by erecting signs in begging hotspots telling them to call the anti-social behaviour helpline if they see individuals begging'

The Council's 'respect for Nottingham' website states: The aim of the Respect for Nottingham strategy is to clean up the City’s streets, take an uncompromising stand against begging, street prostitution and drug dealing and demonstrate that Nottingham is not a soft touch for those bent on criminality and damaging the quality of life in the city. Interesting how they consider begging as 'criminal' and damaging the quality of life for others... 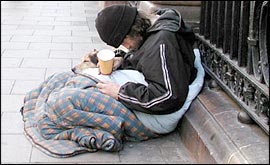 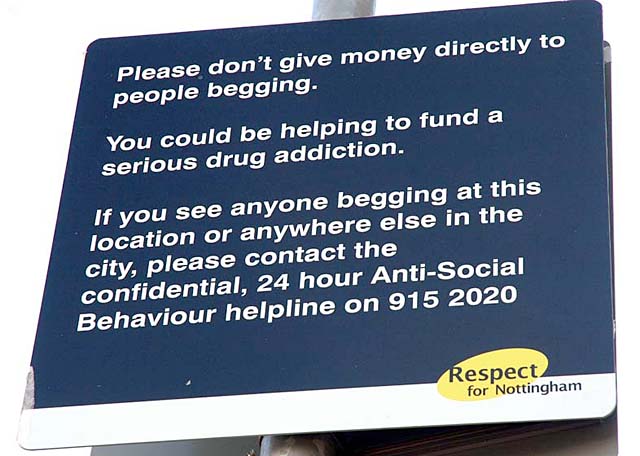 Nottingham City Council is urging members of the public to help them eliminate begging in the city by erecting signs in begging hotspots telling them to call the anti-social behaviour helpline if they see individuals begging.

The helpline will log details of the call and pass them on to Community Protection Officers (Wardens), the Police or CCTV Control Centre to enable an appropriate response. This will allow members of the public to directly contribute to the fight against anti-social behaviour by providing evidence of begging which will enable further enforcement action to be taken.

The move is part of the Respect for Nottingham initiative which aims to make the city a safer, cleaner place by tackling problems which impact on the quality of life for local people such as anti-social behaviour, drug dealing, begging and litter as well as graffiti.

City Council Leader, Cllr Jon Collins, said: “As a result of our ongoing and holistic campaign begging in the city centre has fallen by 85% since September 2003. The Council and the Police need assistance from members of the public to continue the fight against begging and other forms of anti-social behaviour. All calls to the helpline will be followed up and will contribute to building a picture of evidence that will enable further enforcement action to be taken against persistent and aggressive beggars.”

The helpline, 0115 9152020, is open 24hrs every day including weekends. Alternatively people can email asbhelp@nottinghamcity.gov.uk.