With the government's boasting that they "have made significant progress towards our target of removing failed asylum seekers," many activists from all around the country have joined the struggle against the border regime under the banner "No Borders". They will be gathering in London on the 11th and 12th of March for practical workshops about supporting refugees and migrants as well as strategic discussions.

Proposed actions so far include a campaign to close Heathrow detention centres, a day of action on 8 April in solidarity with a worldwide call from Australian No Border activists, and actions against the IOM.

Examples of ongoing campaigns include Ali Noori and others, who are presently struggling to stay in the UK. Recently Mohammed Arrian was granted indefinite leave to remain in the UK only after strong pressure from his local community. Bereket Yohannes was one of twelve people who took their own lives in UK detention centers in recent years. 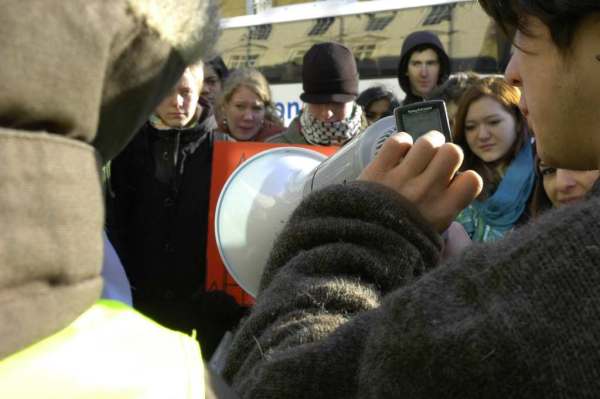 Mariah & Judith speak to us from detention via mobile phone & megaphone

The picture above was taken at a demonstration in London on the 1st March. Supporters of detainees marched from the Passport Office on Eccelstone Square to the Home Office on Marsham Street to demand of Tony McNulty, the minister for Immigration, that they be allowed to stay. The protesters had to defy the SOCPA legislation on their march.

Many groups around the country are supporting asylum seekers or the slogan "No One is Illegal": the National Coalition of Anti-Deportation Campaigns, Barbed Wire Britain, and, of course, local No Border groups in Birmingham, Glasgow, Leeds, London, Manchester and Sheffield. There is also a No Borders Forum and an open announcement mailing list. For more information, check Make Borders History and the IMC UK migration page.

web-based noborder resources in the UK

Following the UK wide noborder gathering on 11 and 12 March 06, a collection of web-based noborder resources in the UK was put together. Check it out (and correct possible mistakes...):