Saturday 18th March was an International Day of Mobilisation against the war and occupation in Iraq, marking the three year anniversary of the war (see call from WSF Assembly of the Movements). Over the weekend of the 18th hundreds of demonstrations took place throughout the world demanding to end to the occupation of Iraq, and protesting against a possible attack on Iran.

In London, the Stop The War coalition said 80 - 100,000 people marched through the streets, however as usual there was disagreement over numbers with the police saying the turnout was as low as 15,000 (a figure which was then printed in mainstream media across the world). See reports and pictures from London [1 | 2 | 3 | 4]. The march sparked some personal commentary about the day and the tactics [ Brian B | riot act | Jo Wilding ]. Locally protests also took place in Glasgow, Newcastle and Dublin.

Indymedia Centres around the world collected reports of demonstrations from hundreds, to thousands of people. In Germany the demands were often broadened to include protests against repression and or the liberty of political prisoners.

In the Arab world, demonstrations took place in Basra and the Syrian capital Damascus. Smaller ones took place in Beirut, Cairo and other Arab cities. In the Tunisian city of Sfax, police stormed into a crowd of about 3,000 people and beat them with batons and truncheons, injuring at least 20. 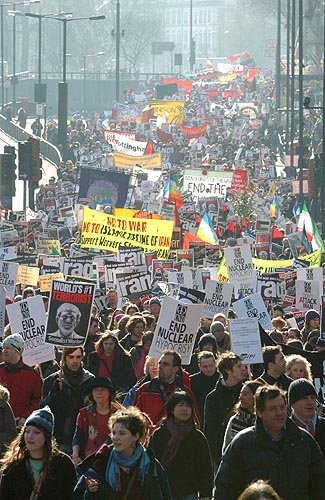