In protest at their inhumane treatment by security guards during the No Borders demonstration last Saturday (8th April, 2006), over 150 detainees in Colnbrook detention centre went on hunger strike. According to the latest updates, nearly 100 of them are still on indefinite hunger strike. A delegation from the Home Office is supposed to pay them a visit to hear their demands for release. [Strike update 17/04]

The hunger strikers have been subject to repression from Colnbrook’s management, with one detainee, deemed to be the "organiser" of the protest, having been locked in an isolation cell on Saturday night, then later removed to another detention centre.

Many of the people inside Colnbrook have been there for over 6 months, with some being detained for up to 3 years. There is no automatic bail review process for immigrants who are being detained. Last January, a detainee at Harmondsworth Detention Centre took his own life out of despair. Fellow detainees responded with a one-day hunger strike and a written statement about their conditions and treatment in detention.

On Thursday 13, a solidarity protest took place outside the Home Office building in central London [Report and Pics]. This had been urgently called by London No Borders and The Square Social Centre. On Satuday 15 No Borders fundraiser also took place in London. And on Thursday 20 Cardiff saw another solidarity demonstration called by the No Borders South Wales group. 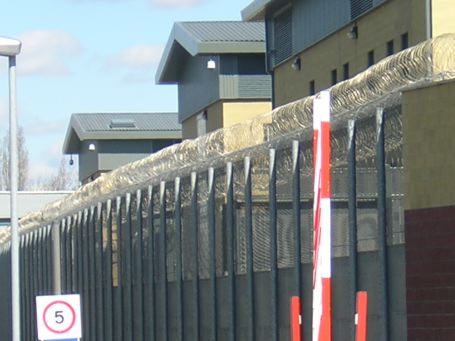 Side view of Colnbrook. No, it's not a prison, they say, just a detention centre

While the demonstration on Saturday was ongoing, inmates inside Colnbrook were forbidden access to the exercise yard and prevented by guards from looking out of windows to see or hear the demonstration. It was reported by detainees that some were beaten up and locked in their cells. Visiting hours in both Harmondsworth and Colnbrook had also been shortened on that day.

In response to this treatment, some 120 detainees refused food and water on Saturday. The hunger strike soon spread to all 4 wings of Colnbrook with about 150 detainees participating. Some of them said they would rather die in Colnbrook than return to countries where they would face further imprisonment, torture and possible death:

"The hunger strike in Colnbrook will go ahead until we're dead, because to deport us to our countries is like killing us. So we've decided to die with hunger" - Patrick, a detainee on hunger strike.

97 detainees, from various countries, have also signed a statement that read:

If you have been detained for more than 6 weeks consecutively, and you wish to be included in the Judicial Review claim against the Secretary of State for the Home Office for our right to liberty according to the Human Rights Act 1998/ECHR, International Law and the Home Office's own policy on prolonged detention, please sign up below."

Colnbrook, which is adjacent to Heathrow Airport, is one of 10 so-called Immigration Reception and Removal Centres across the UK and the latest to be added to the network. The facility opened in September, 2004, and has a capacity of 303 people. It is managed by Premier Group on behalf of the Immigration and Nationality Directorate.

Of the UK’s 10 detention centres, 7 are run by private companies. They hold failed asylum seekers and "illegal" immigrants due for deportation, as well as new asylum seekers whom the authorities believe may disappear from the system. Up to 2,600 people can be held in these centres.

The current update is that the Home Office reports 4 people on hunger strike, we have confirmation though that this is completely untrue with over 50 people on hungerstrike on B-Wing and others on the A,C,D wings of Colnbrook.

The nationalities of those who signed the hungerstrike demands are:

No Borders and The Square have called for a demo at the home office on Thursday April 13th Marsham street - 3pm - 5pm in solidarity with the hunger strikers - this HAS been authorised by the police under sec.132-137 of SOCPA.

N.B. This demo has been authorised under sec 132 of SOCPA with many restrictions - the worst being that only 25 people can attend at anyone time. Feel free to phone 07944 135 617 to find out more on the day.

Following an anti-detention demonstration on Saturday 8th April outside Harmondsworth and Colnbrook Immigration Removal Centres, near Heathrow airport, nearly 100 detainees inside Colnbrook are still on indefinite hunger strike. This is the largest such protest by migrants in detention in the UK, against their detention and threatened deportation.

The demonstration on Saturday was attended by 300 people including many immigrants. While the demonstration was ongoing, inmates inside Colnbrook were forbidden access to the exercise yard and prevented by guards from looking out of windows to see or hear the demonstration. It has been reported by the detainees that some were beaten and locked in their cells. In response to this treatment, over 120 detainees refused food and water on Saturday. The hunger strike has continued and spread with detainees in all wings of Colnbrook participating. Some of them say they would rather die in Colnbrook than return to countries where they face further imprisonment, torture and possible death:

“The hunger strike in Colnbrook will go ahead until we're dead, because to deport us to our countries is like killing us. So we've decided to die with hunger”
Patrick, detainee on hunger strike April 11th 2006


In support of USA Day of Action for Immigration Rights


We are calling a demonstration outside Communications House in London, in solidarity with a Day of Action in the USA, following massive protests against proposed new laws which would criminalise all undocumented people and build a wall on the Mexico-US border, like Israel’s apartheid wall on annexed Palestinian land. 1-2 million people demonstrated in LA, and tens of thousands across the country including Arizona, Ohio. Wisconsin. Several cities have passed resolutions resisting criminalisation of immigrants or offered themselves as immigrant sanctuaries if the bill eve becomes law. In LA thousands of students who walked out of schools. (See photo and report below).


Communications House is the office where hundreds of asylum seekers are forced to sign on with the authorities daily, weekly or monthly, and where people are snatched and taken to detention. One woman describes the terror she has to submit to: I was told to bring my baby. They are sadistic and know that I am more scared for my baby than for myself. They want me to be fearful that I could detained at any time. They take your possessions as if you are going to prison, including your phone so you can’t get help. Before I sign on, I can’t sleep and feel sick because I don know if this will be the time when I won’t come back.


A “Bleak House” for Our Times, Legal Action for Women’s research documents the experiences of women detained in Yarl’s Wood Removal Centre, many of whom went on hunger strike. 50% had suffered rape and other sexual violence, 57% had no legal representation. The findings explode the myth that most asylum seekers are “bogus”, expose conditions in Yarl’s Wood, and demonstrate that most of those deemed “bogus” have never had a chance to present their case.


The event at Communications House is part of an international day of action against immigration detention, including actions in Australia and in Europe, which the Barbed Wire network is co-ordinating in the UK

info@barbedwirebritain.org.uk We will send you more details shortly.


3/25: Los Angeles: Between Half-million to One Million People Protest against Anti-Immigrant Law!


Today in downtown Los Angeles, over 1 million people demonstrated in support of immigrant rights. This was the largest demonstration in the history of California. March organizers announced from the stage that the crowd was over 1 million. Univision and other Spanish-language television reported that up to 2 million people marched. The Los Angeles Times, reflecting police estimates, gave the march 500,000 - police estimates have been trying to minimize pro-immigrant rights demonstration for the last few weeks.

By Immigration News Briefs (INB) Between Mar. 20 and 25, tens of thousands of immigrants demonstrated in cities and towns across the US to protest anti-immigrant legislation being considered by the Senate and to demand legalization for out-of-status immigrants

By Immigration News Briefs (INB): In the Los Angeles area on Mar. 24, school district officials estimated that more than 2,700 students walked out of at least eight schools to protest anti-immigrant bills being considered by Congress.Video: Drummers Marchers-1 Marchers-2

NO to murderous walls

NO to incarceration of human rights workers

there will be a solidarity demo for the colnbrook hunger strikers in cardiff on thursday 20th april at 530pm.

we are meeting by the statue of nye bevan.

Many individuals continue the hunger strike despite racial and sexual abuse,
torture, solitary confinement and beatings at the hands of Home Office/ SERCO
officers at Colnbrook.

[[Romeo Dzamba]] continues the hunger strike. He is now out of the secure block/unit
(AKA Rule 40) after being beaten and racially abused by SERCO security officers,
including a Mr. Stuart, for talking to the press. He was handcuffed and his head
repeatedly hit against the floor. This was repeated in the secure/isoplation unit at
Colnbrook AK Rule 40. This incident occured on Thursday 2nd May, when a young
Afghanistani man on D-Wing attempted suicide and all detainees were locked in their
rooms.
Romeo's full hearing of his Asylum case is on 23rd May at 10am. He has requested
supporters to be present.

[[Amos Onakare Alijaibo]] also continues the hunger strike. He was scheduled for
deportation on 8th May, but his efforts have paid off and the deportation was
cancelled - for now. However he is still disabled from the beating he received from
officers, for talking to the press. He has been in 'Healthcare' and has had various
injections and tests, as has Romeo. The night before the scheduled removal, Amos's
cellmate was taken from the cell and put into Rule 40/solitarey confinement/ special
unit, by around 20 officers who had electronic video equipment with them too.

When questioned, the security manager Mr. Rose said that all officers have been
following Home Office rules, but refused to make clear what these rules are.

We appeal for doctors, lawyers, journalists and others to accompany us on visits to
Colnbrook.