On Saturday April 15th around 300 people marched through Manchester as part of international protests against immigration detention [ call out and more details] People came from Leeds, Newcastle and elsewhere to join the protest and included many asylum seekers and refugees.

The March started outside Strangeways Prison where asylum seekers are being detained for working illegally. The demo went along Deansgate, past British Airways who deport asylum seekers, and then stopped outside the registry office where people from Brides Without Borders spoke about their campaigns and experiences. The March continued on to China Town where the cockle picker s who died at Morcambe Bay were remembered and it ended in a rally at the Peace Gardens.

This demo follows a demonstartion at Colnbrook and Heathrow Detention centres last weekend and over 100 detainees on hunger strike.

Links: National Coalition of Anti-Deportation Campaigns | Noone is Illegal 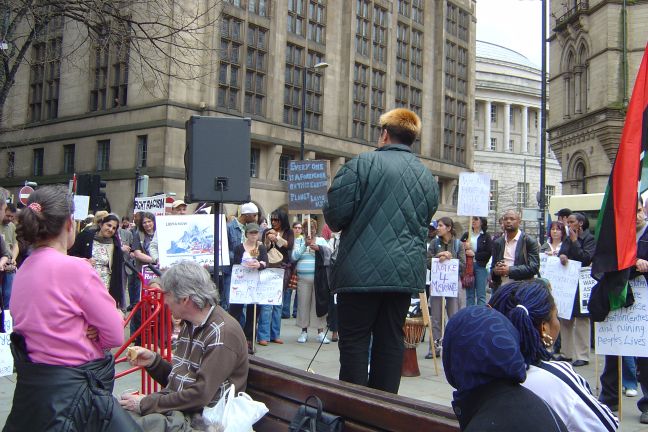 The troll who calls himself "Fred" is actually Nick Cass, the wanky red-haired BNP neo-Nazi nerd who goes around snapping people with his wanky Polaroid camera. At the time so-called "Fred" posted this comment, he posted several other racist comments on Indymedia, after taking a hard earned rest from his Hitler worshipping comrades on Don Black's neo-Nazi and Klan fanzone, Stormponce.

Refugees aren't a problem. Most, when allowed to work, bring great benefits to the economy. The laws stop asylum seekers from working for months after they arrive in the United Kingdom. Preventing hard working people from working (many are skilled workers who could put their skills to use as ever-so-needed "doctors, nurses, and engineers, as well as useful unskilled labour to do the jobs lazy white racists would never consider doing in a trillion years because it is beyond their capacity to do a crap job.

Tony Blair's hardly a fair-minded man, and if Cameron gets elected, things will be much, much worse. He intends to scrap human rights for asylum seekers, just as Hitler removed all human rights and dignity from Jewish people, seperating their humanity from the rest of the population. You'd so approve of that, even if it isn't severe enough. You read Mein fucking Kamph, your struggle of evil over fucking good.

Nomal people don't believe everything they read in the scum papers, as they know racist, reactionary reporting, commonly known as "populism, sells tabloids.

The fact there are black people and refugees fleeing oppression, living in Moss Side isn't the cause of crime. It's a poor working class area with dirt-cheap housing. And if you wish to lump together black and Asian people with refugees (they are British like me and you), "you sick racist bastard", you're doubly as thick as I thought you are.

Its discrimination, alienation, and several other factors that keep job prospects bleak, wages low, and the greedy, biggotted Enoch Powellian Tory-voting employers who don't give people interviews based on the postcodes they live in. There are plenty of all-white areas that suffer problems with crime, too. It's poverty levels, not colour of skin and nationality, that lead to anti-social behaviour, you complete and absolute pillock!

The BNP is just like Al Quida, a cult of brainwashed geeks! But if they had their way, they would be worse. They would copy Hitler and open concentration camps, or restart slavery, if they could, with their friends in the Confederate Knights of USA.

Indymedia should be out of reach for crude racist propagandists like Fred (Nick Cass), as like their beloved Adolf Hitler and his dog-eared copy of Mein Kamph, they pollute people's reasoning with racist propaganda, fuelled by hatred, fear, and downright ignorance.

Fred is "Redwatch photography nut", Nick Cass. He comes from Dewsbury in West Yorkshire. He doesn't understand Moss Side in the slightest, the racist, thick-as-pig-shit twat.

Yeah! He is hardly what I'd call attractive to the eye, as isn't, his championing of the policies of Adolf Hitler.

It's a shame Indymedia has been hijacked by the BNP "bigwigs", trying to divide and conquer the united city of Manchester by scapegoating black, asian, people and asylum seekers fleeing terror.

There's no difference between the upper middle class BNP, and predesessor Oswald Moseley, who found no support in Manchester for his racist lies, also. We don't even like Tories in this city, let alone neo-Nazi loons.

So, according to Wren And Scampi (wacky student names, eh ?) Moseley found no support in Manchester.

Funny how they named a street in the city centre after him then isn't it.....

I shouldn't be too hard on you I suppose - after all you're probably just a pair of wanky middle-class twats from Surrey on the usual student gap year experience of 'Northern life'...... you twats.

If you marry someone who doesn't have the right to live here why moan about it? If you want to live in the UK with your spouse marry someone who has the right to live here. An asylum seeker should be sent back to his or her country if there is no danger and therefore no asylum needed. Whether that person is married or not should have no bearing on the matter. It is wrong to discriminate on grounds of marital status.

Is this Indymedia or Nazimedia?

Get back to Stormponce, losers!!!