Asylum is not a Crime

In what has become a regular, monthly event, Birmingham No Borders and the Birmingham Anti-Racist Campaign (ARC) jointly staged a demonstration on Friday, 26 May, 2006, outside the immigration reporting centre in Solihull. They were there to protest against the inhumane treatment of asylum seekers throughout the Border Regime. Although initially small in numbers, the protesters generated a lot of noise, using pots, pans and megaphones. In an attempt to stifle the protest, Sandford House's management contacted the police. The police, however, were duly satisfied that demonstrators were exercising their legal right to protest and left the protest without intervening. Many asylum seekers, who were there to 'sign on', also joined the protest.

Last month, a similar demonstration was held in solidarity with the unprecedented mass hunger strikes in detention centres across the UK. In November last year, Iraqi Kurds, in conjunction with ARC, staged a demonstration outside Sandford House to protest against the Home Office moves to deport Iraqis to their unsafe, occupied country. Next month's demo will take place on the last Friday of the month, June 30th. 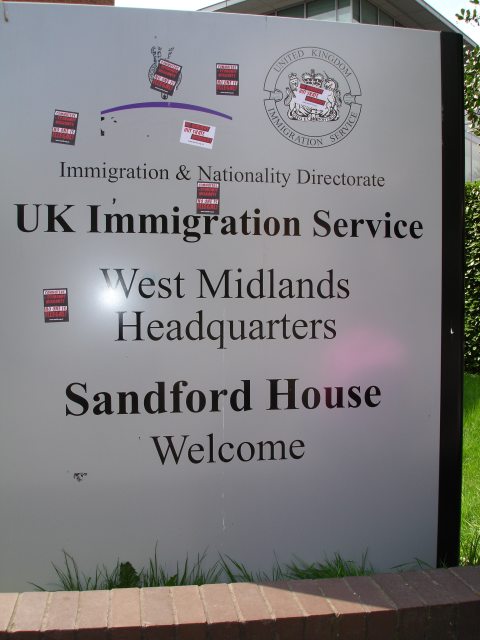 some stickers to remeber us by

Sandford House (41 Homer Road, Solihull) is the Home Office's regional reporting centre, where asylum seekers from across the West Midlands are forced to travel all the way, every week, to 'sign on', further contributing to their systematic impoverishment and humiliation by the border regime.

Many people disappear from Sandford House without warning when they go there to report. People are picked off by immigration officials, then forcibly "restrained" by yellow-shirted security and then held 'securely' in Sandford House before being interned in Britain's network of detention centres, where they can face years of incarceration before being deported to unsafe countries from whence they have fled. Snatch squads, which forcibly snatch families and vulnerable people in dawn raids, also operate from the centre, driving white Securicor vans. [audio report of the snatch squads operating from Sandford House]

Over the last month or so, the corporate media have stepped up their war against asyslum. Mainstream media reports have repeatedly implied that all asylum seekers are "dangerous criminals" and called for the double-punishment of refugees who have broken the law by deporting them to countries where they could face imminent death or torture, whilst ignoring the real plight of people displaced by the very wars states create. This month also saw the appointment of Liam Byrne, M.P. for Hodge Hill constituency in Birmingham, to the post of Immigration Minister. So will he continue in the footsteps of the previous sacked Immigration and Home Office ministers, scapegoating refugees in order to displace attention away from the deepening crisis of legitimacy facing Neo-Labour?

There is going to be a national day of action against reporting centres on 22nd June. Birmingham NoBorders are also planning a series of events during Refugee Week, including a tour of the border regime, screenings and fundraisers. Don't miss it!

where is the human rights? i'm an asylum seeker not a criminal

i been in uk more than 5 years, i left my country when i was 18 and pregnent. we suffred a lot,we left evrything we got, my studing my familly all that from fears , we were under presure and threts. once we are here ,we are facing a seconde threts from immigration. breaflly, since i am here i focussed on my studing(i'm quelifide in beauty therapy)and physiotherapy. i got two girls born here,one age of 5 and another one aged 10 months.i report in sollihul for nearly 4 years i never missed a day i report evry month,each time i go there i got heart problem and high blood presure.i got to travel from city center till there catching two buses to go there even when i was pregnent i got difficulties of travelling.
anyway the djuge believed me and they want to send me back.
bythe way i came here before so many algeriens,we had same sequences and we left in same events and the home office gave them indiffinatly leave to remine.how is it possible not me.i improved my existance in this country. i deserve better than this and we need respect,we are human,it shouldn't be borders,we need a freedome,and awer rights. if we go back who is going to know what is going to happen to us?who cares?no one....