On Friday, 9th of June, the Isreali Navy shelled families holidaying on Gaza beach. Ten people were obliterated in the bombing and children were left screaming over the mutilated bodies of their loved ones. Please follow the Full Article link for more details. [listen to audio interview with surviving member of the family]

The situation in Palestine is becoming more desperate in every area of life, from the continual land theft and increase in illegal settlements across the West Bank to the daily incursions, assassinations and arrests.

Reports:
Check out the links below to read and listen to reports form across the region. For constant updates, please visit the International Middle East Media Centre website. 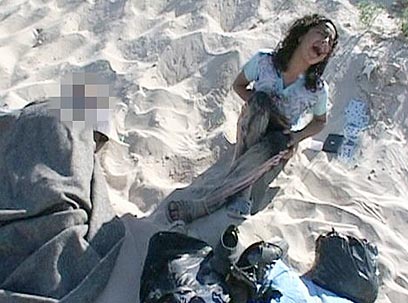 Crying over her father's body

She was running over a small sand hill, screaming and crying "Father, Father", but her father did not reply as his blood and the water of the sea were mixed, and all that Hadeel could see was blackness and sadness that covered the eye of the sun on such a bright warm day.

This was not a scene enacted from a drama series or a movie; this was the real, the bitter and harsh reality of a massacre, conducted by the Israeli occupation army against a family while on vacation at the beach in Al-Soudaniyya, in the north-western area of the Gaza Strip.

The massacre, which claimed the lives of seven family members and three other residents with at least thirty injured, took place on Friday, 11 June, 2006, after the Israeli Naval forces fired shells at hundreds of residents on the beach. Blood stained prams, tables and ripped umbrellas were left as evidence of the horror.

"I saw my father dying in my arms and the bodies of my brother and sisters dispersed everywhere," Hadeel said. "They took me to hospital. Thank God, I am lightly injured, but I've lost everything. My family was around me but no one was alive."

"Everybody was running away, everybody looking in all directions searching for family members. Screams and bodies were everywhere," she added. "I tried to talk to him and say what Muslims say in moments of death (There is no God but Allah, Mohammad is his prophet), but he was dead."

The family members killed were the father, Mohammad Ali Fad'os, his wife, Ghalia, his three daughters and son. The family comes from Al-Atatra area, near Beit Lahia in the northern part of the Gaza Strip. Wiham, 20, and his two sisters, Latifa, 11, and Hadeel, 8, were lucky to survive.

It was supposed to be a holiday, a good time amidst the continuous Israeli attacks and strikes on Gaza. The children, Haitham, Sabreen, Elham and Ra'esa were playing on the sands and hugging the soft waves of the tides before Israel's shells of hatred destroyed their happiness and their lives.

Among the killed members of the family were infant twins not even one year old, one of them was sleeping, while the other was swinging on a baby swing.

Their laughs that had filled the beach were silenced by the sounds of the shells and explosions that ripped their small bodies to pieces.

The only sounds that remained there were cries of pain, the wail ambulance sirens... Where are the children? Where is the father, the mother?... where is everybody?!

Nothing remained, everything ended by the shells of hatred. The remaining sound was the voice from one child, keening over the body of her father, screaming "Daddy, daddy, what did they do," and she threw herself on the sand beside her father's body after finding no space on his ripped-apart lap.

Paramedics collected the remains of the family's bodies, and carried the upper torso of the mother before searching for the remainder of her body buried, in pieces, under the sand. Then they searched for the bodies of the infants.

Gaza cried, Palestine cried and the waves of the sea cried for the people who came to vacation on the beach, before the army transformed their happiness into sadness and grief.

The battle field this time was a beach; a beach filled with families trying to enjoy the good weather and sunshine; innocent civilians trying to escape the daily Israeli attacks on Gazan cities. They came to the seaside in search a good time, but the shells and military aggression pursued them there and stole their happiness, their lives and families away.

Israeli senior military officials explain their crime with an "apology" and an empty statement that the "incident" will be investigated. Will that be enough for the families, the children, the innocent lives that were oblterated by these Israels powerful shells?