On 20 November, 2006, some 20 environmental and human rights activists risked arrest by blockading a Shell petrol station in central Birmingham for over 3 hours during the morning rush hour. The direct action was taken in solidarity with the community of County Mayo, Ireland, who are resisting the construction by Shell of a dangerous and experimental gas pipeline and refinery in a beautiful and remote part of Ireland [background]. The project is yet another example of how governments (in this case, the Irish state) are putting the interests of large corporations before those of local people and the environment. 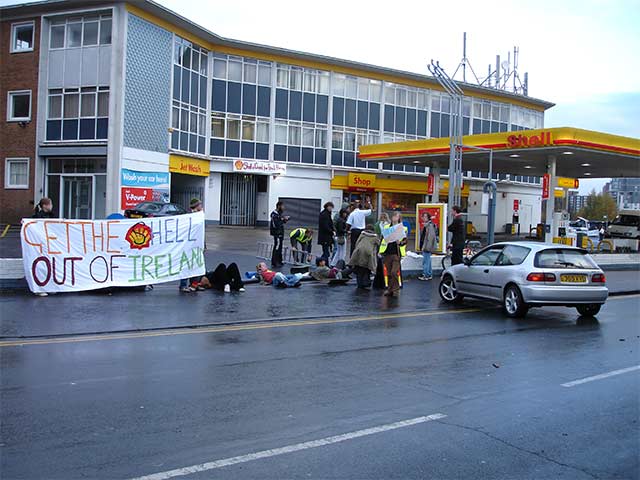 The daylight blockade commenced with a three-person lock-on in the entrance of the garage and a banner drop from a nearby ledge announcing that 'Shell is Closed for Ethical Repairs'. Other banners were set up across the exits and alongside the adjoining road, telling Shell to 'get the hell out of Ireland' and giving details of the 'Shell to Sea' campaign. A lot of leaflets explaining the situation in County Mayo were distributed to passers-by, who seemed generally sympathetic in their response. By the end of the three hours, the protest had also garnered widespread mass media coverage on local and national TV and radio (see BBC's coverage, for example).

Police took over 20 minutes to respond to the action but, on arrival, failed to convince the protesters to move on, with vague threats of arrest for 'obstruction of the highway', 'breach of the peace', and even 'withholding identity'. In the end, there was little the small group of ill-prepared local police could do except stand by, wave bemused motorists on and take some late photos on a knocked-up digital camera.

The protest ended peacefully at a time determined by the protesters after a meeting to which the franchisee was invited to give a formal response to the action. Police also followed some of the protesters to a nearby restaurant after the action, going as far as entering the premises to conduct surveillance before the owner of the business asked them to leave on the grounds they were harassing his customers for no reason.