Community under siege in Mayo

Since late 2000 there has been an on-going attempt by multinationals and the Irish state to devastate a remote coastal area of county Mayo with a toxic refinery and a high pressure production gas pipeline. Since the summer of 2005 mass pickets shut down the refinery construction site after five residents were imprisoned for refusing to allow Shell’s sub-contractors access to their and their neighbours' small farms which the pipeline is to go through.

In August Shell announced that they intended to re-take the site in September, however during that month over a hundred people would gather at the gates when ever there was indications that such an attempt was to be made. Shell failed in September, but on the third of October a massive two hundred strong police unit forced a path for Shell. This week there have been sporadic sit down blockades of construction traffic and solidarity protests have taken place in locations across Britain and Ireland. 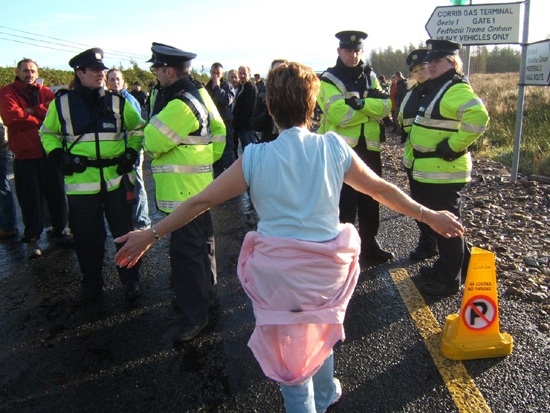 The main company involved is Shell, but Statoil - the Norwegian state energy company, and Marathon, are junior partners. Meanwhile large sections of the Irish media, in particular the Independent Newspapers group, have smeared the anti-Shell campaign. These media outlets are owned by Sir Anthony O’Reilly, who also owns 45% of Providence Resources, an oil and gas exploration company which operates in Ireland and Nigeria, and which earlier this year signed a deal with Exxon-Mobil to exploit gas and oil fields off Ireland’s west coast.

Next week speakers from Ireland, South Africa and Nigeria will be at public meetings in London, Birmingham and Manchester, in response to Shell’s sponsoring of the Wildlife Photographer of the Year Award. After this there is a Rossport Solidarity Camp speaking tour of Britain.

There's a short film detailing the background to this situation. This is what the media won't tell you: