"It is the tragic of each and any democracy, that everybody here can tell freely his oppinion in public and that state representatives have to be protected in a democracy. In dictatorships things like that would not happen."
Horst Teltschik, organizer of the NATO-security conference in an interview given to BR 2 "no to war and capitalism" "we kill in the name of the profits of the rich" occupiers out of Iraq http://www.br-online.de/bayern-heute/artikel/0702/07-Teltschik/index.xml or a report about the interview

Thousands protested against militarism and capitalism in Munic.

Although the protests were peacefully, police captured and hurt many people.

On of them was thrown by cops from the top of a sculpture (near Telecom-building) and lost his conscience. I saw an old man near Gärtnerplatz beaten up by 3 police men for minutes.

Undercover police agant, agents provocateurs, were all over in the black bloc and in between the "normal" protesters.

Bevore the demonstration, busses were hindered to enter Munic and some people were arrested out of busses by the entering police. 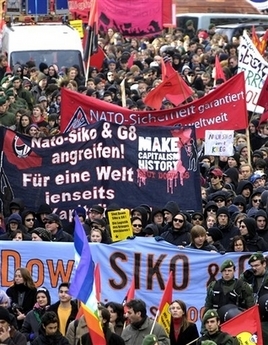 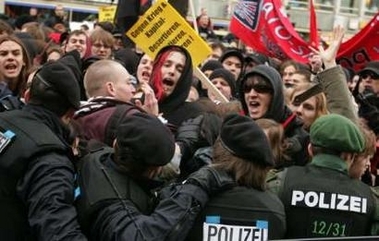 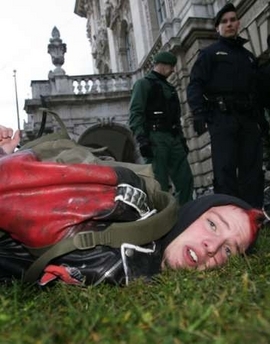 Protesters march in downtown Munich, southern Germany, during a rally against the Munich Conference on Security Policy on Saturday, Feb. 10, 2007. The annual conference, now in its 43rd year, is often used as an opportunity for officials to conduct diplomacy in an informal setting. Eds note: SIKO stands for security conference. Banner at center reads 'Attack Nato-Siko (Nato Security Conference) and G8 for a world beyond capitalism'.

Several hundred people on Saturday took to the streets of downtown Munich amid tight security to protest against the three-day Munich Security Conference which opened in the Bavarian capital on Friday evening. Holding anti-US and pro-peace signs, radical leftists, anarchists and peace activists marched near the bastion-like conference site as hundreds of policemen kept a watchful eye on the peaceful crowd. Protest organizers expected to see around 5,000 people for the demonstration. More than 3,500 police forces have been deployed throughout the city, anticipating possible violence . The Munich Security Conference is widely viewed as the top annual gathering of movers and shakers on global strategic issues. Around 500 political and military leaders, diplomats and experts are discussing pressing international issues like the Middle East conflict, Iraq, Iran, Afghanistan, terrorism, NATO's future global role and energy security.