On Thursday 22nd February the EDO Corporation released their report on the fourth quarter of 2006. The Corporation, of which the embattled Brighton based arms dealers EDO MBM are a wholly owned trading unit, has announced that it is operating below targets, (See EDO's Fourth Quarter Report)

Below is an 'Alternative Report' from the Smash EDO campaign. Brighton based EDO MBM has been the target of sustained protest and direct action since 2003. On Friday 16th Feb a group of protesters occupied EDO's car park and foyer blowing claxon horns and scattering photos of the carnage in Iraq. This was the second such action in the last month ( reports: (1) | (2) ). On Monday 19th Feb 8 students from Sussex University locked themselves to EDO's fence and gates delaying the opening of the factory and preventing deliveries ( see: Press Release | Photo Report ). On Wednesday 21st Feb protesters held a funeral procession and vigil for the victims of the US bombing of Somalia at the factory ( see: Press Release | Report ). 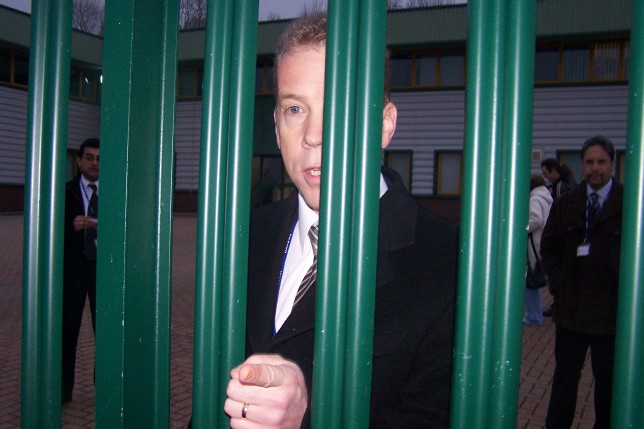 
EDO Corp declared a 46% drop in profit yesterday in results of its final quarter of 2006, a year they surely will not forget. Revenue grew only 10%, in a dramatic slowdown on previous annual performances, and at a time of surging war by the Bush administration during which other arms companies have continued to grow massively. EDO Corp was removed from the Forbes 100 list of the fasted growing US companies in 2006, a capitalist honour they had been proud of for several years previously.


EDO suffered major losses of market value throughout the year and continued to refer to ‘one off’ legal expenses as a substantial factor in the drop. Yesterday news of EDO’s annual result caused a 3% drop in share value.


In Brighton UK, EDO MBM Technology Ltd failed in spring 2006 to secure a High Court injunction against anti-war protesters and the Smash EDO protest group. The case was seen as one of the few encouraging victories for the right to protest in the UK during the year, and helped set a precedent for other protest groups to be allowed legal aid to defend themselves against corporate civil injunction actions. The case also caused the first undoing of serial law abuser Tim Lawson-Cruttenden, whose law firm Lawson-Cruttenden and Co has pioneered similar injunctions against protest groups across the UK. He was severely criticised in the case and has since been sacked by both Harrods and Oxford University for similar failures.


Since the court victory regular noisy protests and direct actions have continued against EDO MBM as the campaign has grown in Brighton. EDO MBM has closed a major section of its battlefield computer business MBM Rugged Systems that they had hoped would be a long-term business development when they were taken over by EDO Corp in 2003.


EDO MBM also suffered from continuing acts of direct ‘decommissioning’ by anonymous activists, including surgical strikes on high tech air conditioning fans at the rear of its factory. The fans, essential to the high tech engineering clean rooms are worth thousands of pounds each, and were first destroyed in early 2005. EDO MBM have now lost use of them on three occasions causing untold disruption to the production process of military technologies.


After last year’s resignation of corrupt EDO Corp director and former CIA man Admiral Dennis C. Blair (over a conflict of interest concerning the US multi billion dollar F22A programme) EDO Corp announced last week they have replaced Blair with a new ex-military mandarin, also with strong ties to the CIA. Retired General John A. Gordon is the former advisor on Homeland Security to George W. Bush. He has also been the National Director for Counter Terrorism in the Bush Whitehouse.


From 1997 to 2000 he was Deputy Director of the CIA, and had previously been Associate Director of Central Intelligence for Military Support. In 2005-6 EDO Corp bought up three smaller companies involved in supplying US intelligence agencies and are increasing their share of this expanding market, which has steadily been handed to corporate contractors over the last decade.


General Gordon has also been responsible for the ‘improvement’ and overall management of the entirety of US nuclear weapon programme as Administrator of the National Nuclear Security Administration. Perhaps General Gordon will be able to advise EDO MBM managing director Paul Hills about his own security problem. Sources who have infiltrated the Brighton factory have revealed to activists that staff morale is at its lowest point ever as masked protesters have on two occasions paid noisy and unexpected visits to their workplace to remind them of EDO’s complicity in mass murder, war crimes and ethnic cleansing, and the regular Wednesday noise demo’s are continuing unabated. It’s also believed that the long term financial future of the EDO (UK) arm of EDO Corp is in doubt, and jobs are expected to go soon. EDO MBM employees have been reported to be looking for alternative in the Brighton and Hove area.


The best security advice that Nuke Spook General John can give is perhaps that its now time to withdraw EDO’s base from Brighton, before they lose even more money. Smash EDO have vowed to step up the campaign against the factory in 2007.

President Smith revealed that the company had been through heavy waters before, particularly in the nineties when unfortunately for EDO ' there was an outbreak of peace.' At that time the company workforce was slashed from several thousand to a few hundred. Smith hung on to his job of course.

Trying to be positive about the future of EDO, Smith said that he 'expected the US defence budget to continue to grow' . He said this despite an overwelming majority of US public opinion calling for a withdrawal of troops from Iraq, and even their elected congress people beginning to take action against President Bush.There is still a lot of potential 'emergency funding' around Smith said.

No danger of any peace outbreaks that might damage trade then. Even if the worst happened and there was an outbreak, EDO had now substantial investments in the US internal and external spying and inteligence industry that will continue to grow, with or without illegal bombings and invasions of other countries.

Smith said there were many other US and foriegn government contracts he was not allowed to tell shareholders about.

a nice pic of murderous scumbags The machine in the middle is the EDO MBM ERU-151, used in the Israeli F16 VER-2 bomb rack, and used to drop missiles and cluster bombs on Lebonese civilians.

smishy must be smashed, he has no clue what he's talking about.


Good to have a bomb rack making expert contributing to IMC UK to help with the investigative research.

Smishy may be wrong on the type of bomb rack.

My guess is that the middle machine in the photo is the HDERU used by UK forces to commit war crimes in Iraq and Afghanistan. Maybe Derek can confirm this

HDERU
The HDERU is a 14/30” Ejector Release Unit that was developed specifically for the Panavia Tornado. It utilises the MACE (Minimum Area Crutchless Ejector) suspension system which eliminates swaybracing thereby reducing frontal area and drag. The HDERU is fitted to the centreline, shoulder and inboard wing pylons and can carry stores up to 5000lb in mass. The ERU utilises a standard over centre lock type and is operated by gas pressure from two pyrotechnic cartridges. The store is ejected via two independent pistons which can be throttled to provide pitch characteristics as necessary.

wide of the mark?

just like those bombs that hit qana? Or were they right on target derek?

You are all obviously wrong

It can't be anything to do with bomb racks. Why would they be smiling so much? My guess is these machines are either ice cream makers or child safety devices of some kind. They would have to be pretty sick people to look so proud about selling death machines now, wouldn't they?.

Why are you arguing?

Stop arguoing about what kind of mechanism it is.. it forms part of a killing machine, that's enough evidence for me, and a whole load of other people.