We’re Heartbroken and Furious! A report from Copenhagen, and call-out for action 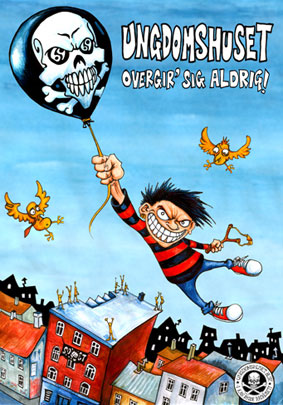 As soon as the news of the eviction of Ungdomshuset broke out and once we managed to sort out our trip, a small group of us arrived in Copenhagen to actively support our friends and comrades here. While it might at first seem slightly irrational to come and support what already looked like a lost battle (i.e. the re-occupation of the building) we felt it was absolutely necessary to be here for a number of reasons. We do consider buildings like Ungdomshuset as our buildings, extending far beyond the borders of Copenhagen or Denmark. At a time when the last few remaining free spaces are viciously attacked across Europe, each new attack has to be defended by as many of us as possible. To be here, to learn from and interact with our comrades in Copenhagen, to see what this building meant for us is an excellent lesson – a step towards not allowing the next free space in London go without a fight.

Ungdomshuset has been at the core of radical political and cultural activities in Copenhagen, as well as internationally for 25 years. It was one of the only lasting free spaces outside Christiania, and its demolition is a devastating image of cultural mainstreaming and repression in an otherwise consensus seeking welfare society. But the Danish consensus has been demolished along with the building, and has given rise to energetic resistance that, although in a defensive state at the moment, could quickly turn to the offensive.

We arrived Tuesday in time for the Reclaim the Streets demonstration with over 2000 people participating. It ended in Christiania, wherefrom a smaller group gathered outside ‘Vestrefaengsel’ (the prison where most of the arrested activists are being held) for a solidarity demonstration. This was a moving experience, as many very young people defied the cold, distance and police to show active solidarity with their imprisoned friends and comrades.

Wednesday has been a day of relative regrouping and preparation for people here, with expectations running high for tomorrow’s demonstration – marking one week from the eviction, as well as International Women’s day. This evening there will be another solidarity demonstration outside the Vestrefaengsel prison.

We call out for a demonstration Saturday the 10th at 2 pm outside the Danish embassy, 55 Sloane Street, SW1X 9SR. Bring banners and ideas for further action!