A polar bear today visited a number of travel agents, and the Tomas Cook call centre in Bradford, to ask these climate criminals if they would kindly stop destroying his habitat. 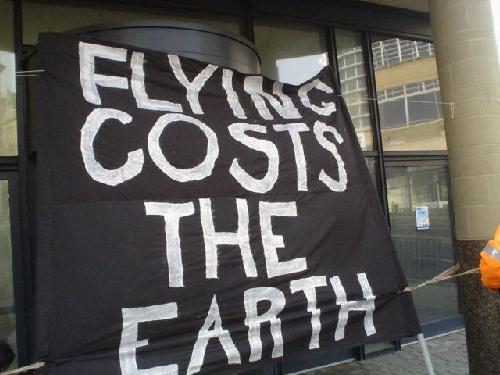 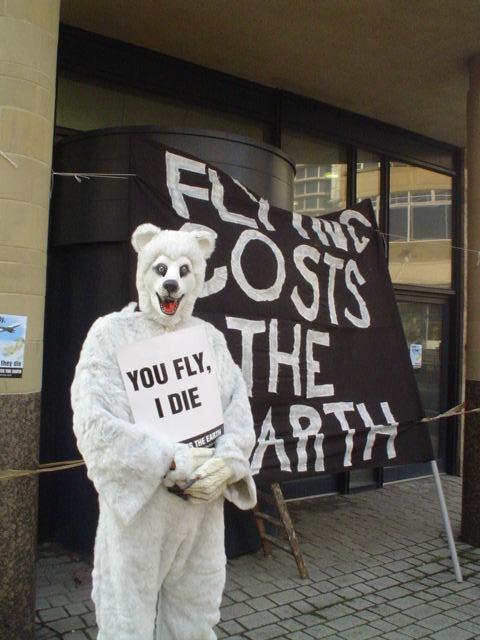 Today Bradford witnessed the unusual sight of a placard-waving polar bear. The placard, with the simple message; “You fly, I die”, was aimed at the selfish minority who continue to fly despite this being a major contributor to climate change – and the fastest rising source of carbon dioxide emissions in Western Europe.

The bear and his human friends visited a variety of travel agents in the city centre with a letter asking that the climate criminals stop destroying the Arctic. After that, he made his way to the Tomas Cook call centre on Godwin Street, where several local residents had erected a banner and were busy posting the windows with “You Fly, They Die” stickers (see

The local citizens – inspired by the excellent Camp For Climate Action last summer - were dismayed that the climate crimes of this firm seem to be going unnoticed. A spokeswoman for the group pointed out that there were two great lies about flying which needed to be challenged. The first is that flying is a small contributor to green house gases; the people who say this rely on figures which don’t include return flights or flights to and from Britain made by foreigners, and ignore the extra damage done by emitting pollutants high in the atmosphere. The other lie is that flying is a common activity for ordinary people. Studies clearly show that flying is overwhelmingly an activity for the rich to take part in, at great cost to the rest of us. The average income of passengers using Stansted - supposedly Britain’s “low cost” airport – was recently found to be £48,000!

Without immediate action it is likely that summer sea ice in the Arctic will be totally absent within 30 to 70 years – this would spell extinction in the wild for the Polar Bear, which relies on sea ice for hunting. The Arctic is already one of the fasted warming parts of the world.

In the face of the reckless, criminal and selfish actions of a minority of people that threaten us all, surely the time has come for sane and moderate people to stand up and say that enough is enough. The profit terrorists and climate criminals must stop before they kill us all.

The police rather politely asked who wanted to be arrested, and five people decided to attempt to continue their important public-spirited work through the courts. The bear went home for tea and biscuits.