Like in previous years, precarious in Europe and beyond have chosen the first of May to take the streets. On Mayday, casual and flexible workers, immigrants, unemployed, temp-workers, part-timers, are stepping out of invisibility: L@s precari@s se rebelan! (The precarious are rebelling). They are demanding new social rights, or, as in the South of Spain, "the right to have rights" in the first place. In some cities, the precari@s march with the trade unions. In others, they set up their own Maydays. Who are "the precarious?" Here is a description from Barcelona EuroMayday Manifesto 2004:

"We are the precarious, the flexible, the temporary, the mobile. We’re the people that live on a tightrope, in a precarious balance, we’re the restructured and outsourced, those who lack a stable job, and those who are overexploited; those who pay a mortgage or a rent that strangles us. We’re forced to buy and sell our ability to love and care. We’re just like you: contortionists of flexibility."

to be continued... What is precarity? Is precarity of living and working conditions something new? Does the illegalised immigrant, the student, the single parent, have anything in common with the flexible IT-worker, the squatter, the temp worker? Is the precarity movement demanding a return to "save" nine-to-five jobs? What is flexicurity? What about autonomy of work? Is there a "precariat"? Many questions, any answers?

dont forget us up here!

As we do every year, there will be a street party in Glasgow to celebrate Mayday and reclaim our city. 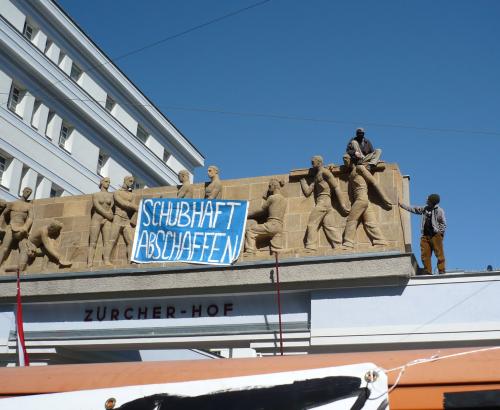 Some 1.500 people took part on the 3rd EuroMayDay parade in Vienna, Austria. There where lots of actions beside the colourful march, sound systems let's the people dancing in the streets, thousands of leaflets were spread, posters put on the road, banners hanged-up around, paint bombs coloured an employment office and police officers...

more information (in german) and pictures to find here: