Camp with No Borders

2007 is witnessing a resurgence of No Border Camps, which were instrumental to the No Border movement from the late 1990's onwards. Three No Border camps for 2007 have recently been announced. The first will be in the Ukraine at the intersection of five countries and at the border of Fortress Europe. In September, it is the turn of our very own Gatwick airport, where the government is planning to build yet another prison for migrants. Finally, in November, there will be another No Border camp at the Mexico/US border, where every year hundreds of migrants die trying to cross the desert or at the hands of the vigilante 'border police', the Minutemen. 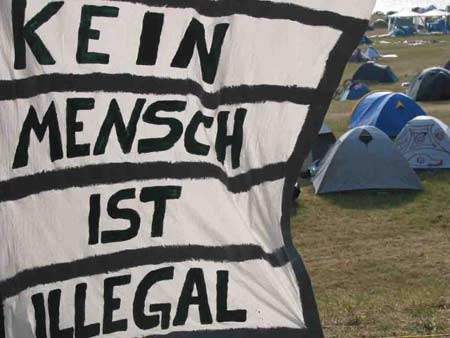 Following on from the successes of previous No Border Camps in 1998-2000, 2001, 2002 and 2003, these camps are "tools to build a movement strong enough to challenge the systems of control, definition and division which damage us all," according to the organisers. They are spaces where people can get together to share skills, experiences, knowledge and ideas; where they can learn and conspire, take action and then plot some more. They are also forms of public education: telling stories and perspectives on issues of migration that are rarely available in the mainstream, and countering the accounts which either ignore or justify the systematic violence, exploitation and indignity that borders cause.

The camps also offer an opportunity to experiment with forms of self-organisation; forms which themselves resist the categories imposed by a whole array of borders that are imposed on people. In this way, as No Borders activists put it, "we can collectively find new and stronger ways to break these borders."

Previous camps have been positioned on sites important to the construction of border and control systems, forming nomadic protests, each drawing attention to and attacking specific manifestations of the the border regime. For example, the Strasbourg camp was near to the headquarters of the Schengen Information System and the Frankfurt camp took place near the airport.

This year's border camps are no exception. Gatwick is not only the site of an existing detention centre and another in planning, but the nearest town, Crawley, also hosts 'charter flight' company XL and the ID interview centre. Nearby, in Croydon, the headquarters of the Borders and Immigration Agency, the government department that deals with immigration, is located. Gatwick is also not far from Dover and Folkstone. Many migrants risk their lives hiding under lorries, or in suffocating containers, so as to avoid detection.

The border fortifications near Gatwick are part of the UK government's plans to strengthen Britain's borders even more. It only takes a brief look at the Government's proposed new Borders Bill, or the soon-to-be-implemented point-based immigration system, to see the direction in which their immigration policy is heading.

No Borders are holding a public meeting on Saturday, 30th June 2007, in London to discuss the Gatwick Camp. You can contact the camp's working group at g-anbc2007@riseup.net.

noborder camps happened all over the years!

there were actions and camps against borders during the last years, too. yuo can find information about it in the section noborder action @