Actions reports from the International Day of Solidarity with John Bowden

Yesterday was the second International Day of Solidarity with prison militant John Bowden and in defence of the Anarchist Black Cross. 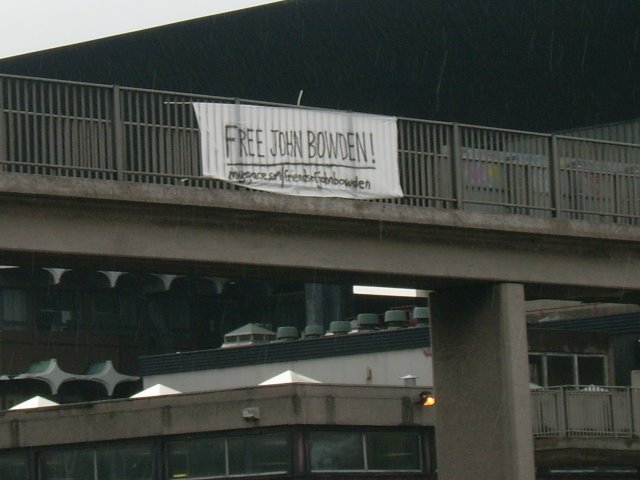 Free John Bowden banner over the A58 in Leeds 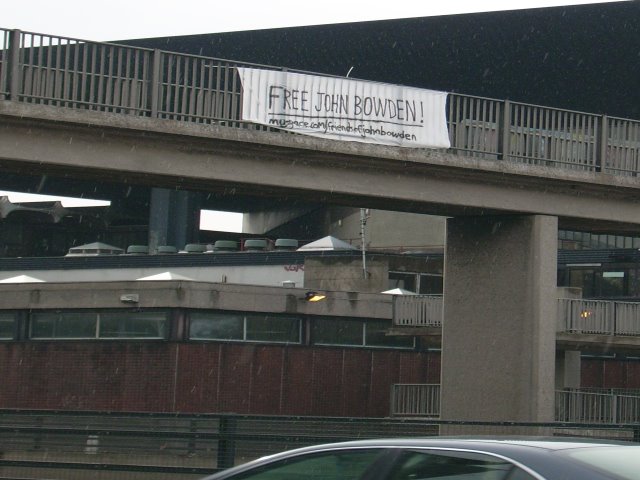 Seen by thousands of motorists and pedestrians 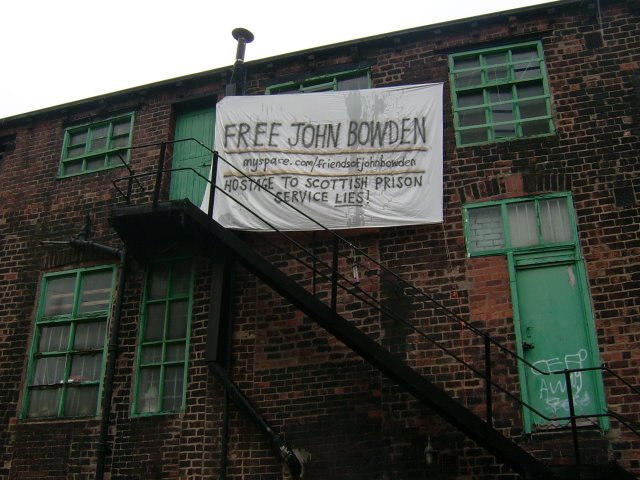 Banner at The Common Place in Leeds 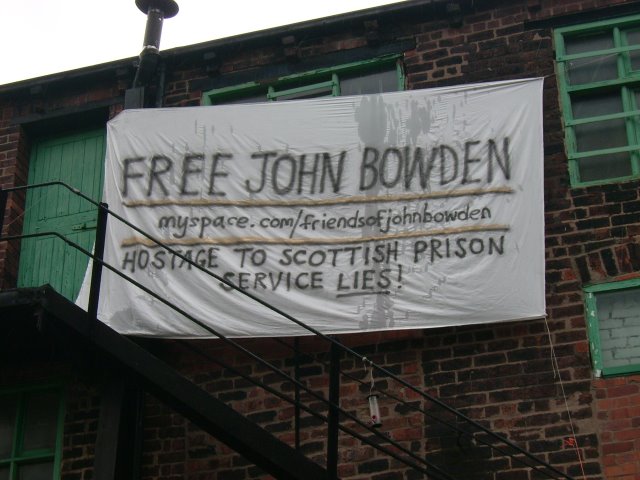 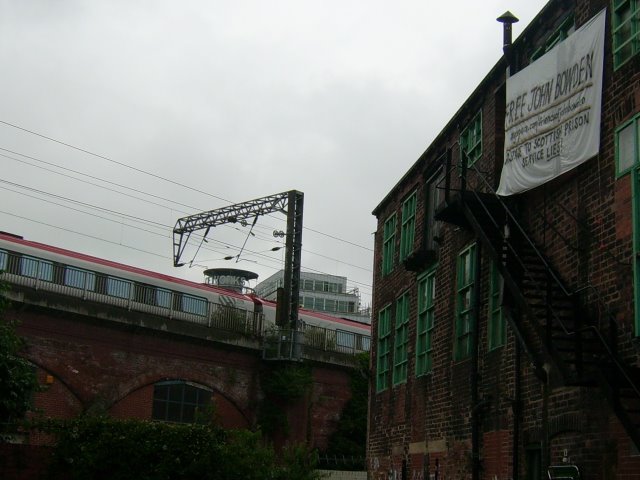 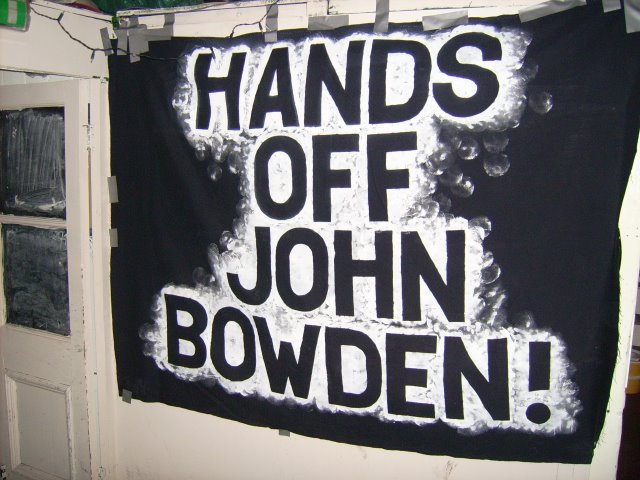 Banner hanging inside The Common Place 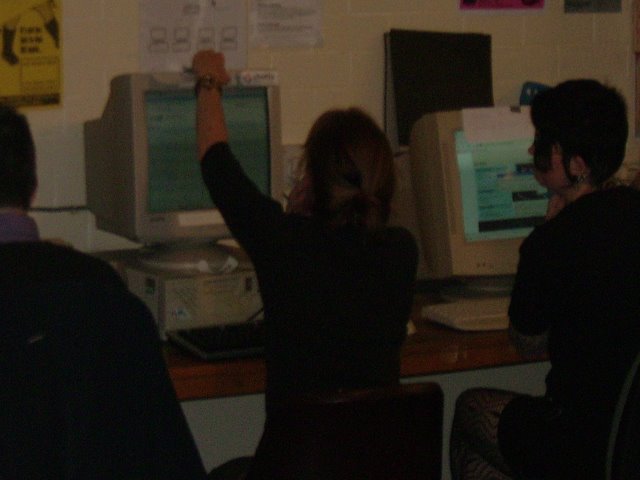 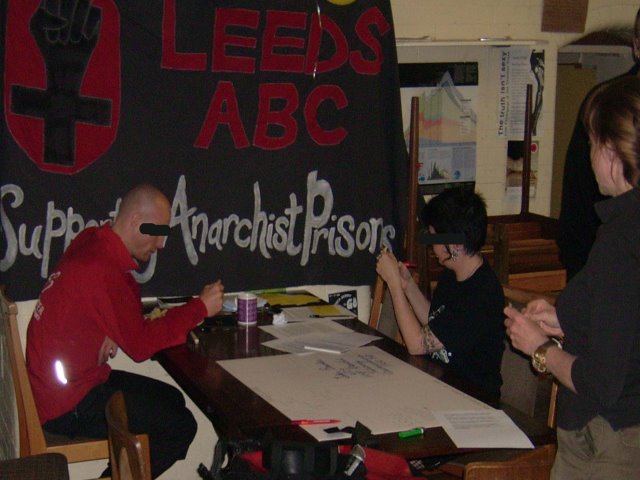 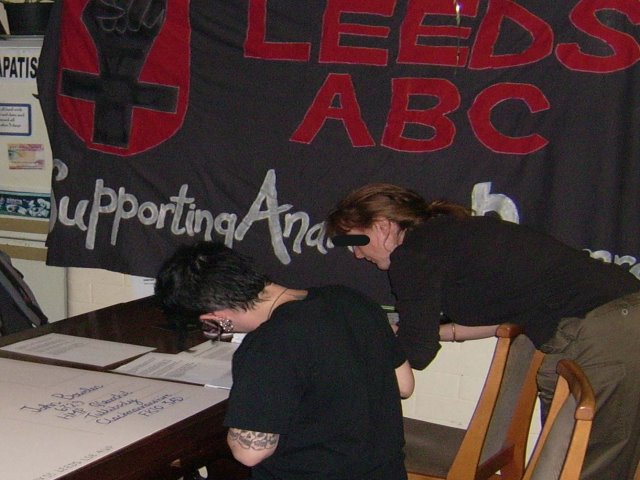 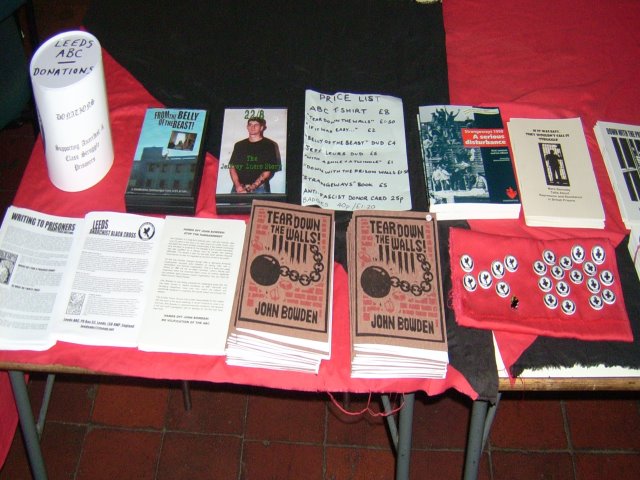 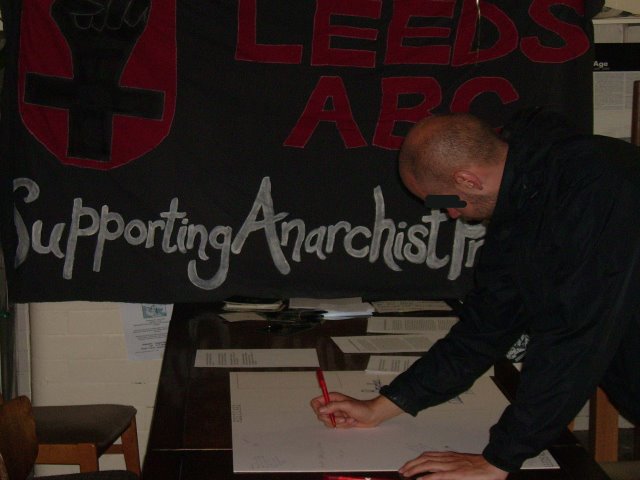 Signing a giant postcard for John 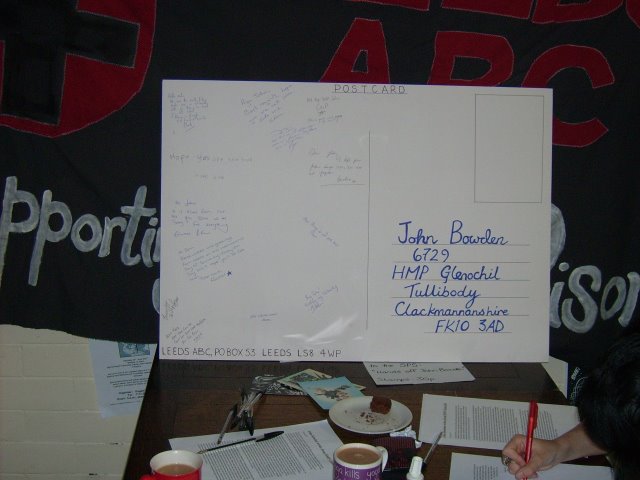 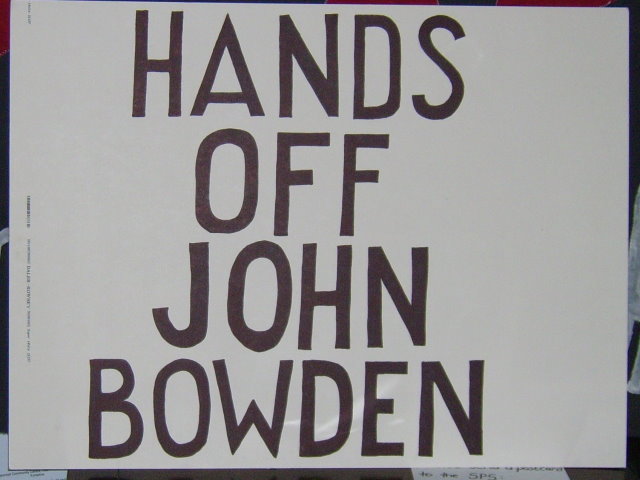 Friday 13th July was the second International Day of Solidarity in support of Scottish prisoner John Bowden and the Anarchist Black Cross (ABC) who the Scottish Prison Service have maligned as a “paramilitary” and “terrorist” organisation. Support events were advertised to take place in Brighton, Edinburgh, Hull, Leeds, and London, as well as internationally. We hope that many other actions also occurred. Please post your reports here.

The campaign in support of John and the ABC continues. Thanks to everyone who showed their support on Friday 13th, and please keep on doing all you can.

In Leeds, support activities started early with a banner drop over the north bound multi-lane A58 motorway. The banner, over 3m in length, read ‘Free John Bowden’ with the ‘Friends of John Bowden’ website address. It had been expected that with a bit of luck the banner might remain in position for 30 minutes before it was removed, but it is STILL there, having been seen by thousands of motorists!

Next, a much larger banner was erected at the rear of ‘The Common Place’ social-centre. Since this is close to Leeds station, and right next to the tracks, where trains going north from Leeds, or arriving, are travelling at their slowest, it is a perfect location. The banner in this case reads: ‘ Free John Bowden – Hostage to Scottish Prison Service lies’. It also contains the ‘Friends of John Bowden’ website address.

The Common Place was the setting for the rest of the day’s support activities. Leeds ABC did an info stall, with leaflets about John’s case, ‘Writing to Prisoners’ leaflets, copies of John’s pamphlet ‘Tear Down The Walls!’ and much more. Banners were put up and a table was arranged with writing materials and a stack of postcards addressed to the Scottish Prison Service (SPS). There was also food, which was kindly prepared by Ben from the Common Place café collective.

John’s supporters, who attended the event, spent the afternoon writing out cards and letters to the SPS, to the Governor of Glenochil prison, where John is being held, and to the employers of Matthew Stillman, the SPS stooge responsible for the lies against John and the ABC. The SPS were also bombarded with e-mails and phonecalls, as well as Glenochil prison itself.

The centre-piece of the Common Place support though was a huge A1 ( 2ft x 3ft) ‘postcard’ to John, signed by everyone who took part, and with the words ‘Hands Off John Bowden’ stencilled on the other side. We’d love to see the faces of the screws when it arrives at Glenochil prison!

Protest emails and faxes sent from comrades in Tokyo, Japan!

ABC Berlin printed pre-addressed postcards to John and distributed them around the city for people to send in solidarity. ABC Berlin also made public the situation of repression against the ABC in the UK. Emails and faxes were sent to the authorities on the international day of solidarity.

The was a picket of SPS HQ. Some people mistakenly went to the Scottish Parliament and went home when they never found a demo. The police were at the SPS threatening to arrest people before the picket even started, so a second batch of people who had wanted to come couldn't and there were only half a dozen of us. We talked the police out of arrests. We also got a meeting with the SPS head of security and someone who knows Johns case intimately, and told them it was wrong for them to be holding John or to smear prisoner support groups as terrorist or extremist. Staff were offered leaflets as they left work, some as they drove by, and about half took them. One person who walked out seemed sympathetic and offered advice, another said they had seen the leaflet circulated in the building before leaving.

The SPS HQ is located in a business park so 'Release John Bowden' posters and leaflets were put up in the surrounding bus stops. It was too wet for the sound-system and it've just got us arrested. Even after postering the SPS HQ itself their head of security came over not to complain, but to shake hands and thank us for keeping it peaceful, and they left the posters for the wind and the rain to take care of. They were clearly expecting trouble - their SPS flag and their Union Jack weren't flying for once, although they left the Saltire up. I think the cops initially heavy-handedness, wanting to arrest people for not giving their details, was this was the first openly anarchist event in Edinburgh since the Selex vandalism. It was disappointing people who were trying to attend couldn't, but the small and peaceful nature of the picket will have raised awareness of John's case with the staff in the SPS.

Friday the 13th was international day of solidarity with John Bowden, here in our forgotten city we were proud to have our own event, short notice and bad weather did not deter the attendance of the meeting. An informal debate took place where we discussed why John was in prison, and all agreed John’s openness about why he finds himself in prison was a good thing, I explained how he become politicical and his involvement in the Birmingham 6 case. The debate turned to how the prison system was not there to reform people but to break them , especially those who are politically motivated and class conscious as expressed in John’s pamphlet ‘tear down the walls’. We wrote postcards to John, and a petition was signed to complain about the behaviour and conduct of Matthew Stillman which is to be sent to his employer. A solidarity card is doing the rounds of friends and comrades unable to attend. All who attended brought ideas for future events in solidarity with John case . We intend to have a stall at Hull Mela for example. All were enthusiastic, old faces and new, too work again together. Many thanks to all that took an interest, Leeds ABC for Pamphlets and Ray for stamps.
In struggle and solidarity
Hull Anarchist Collective. 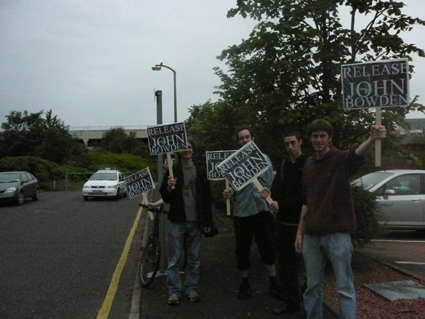 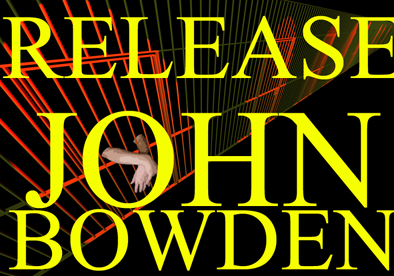 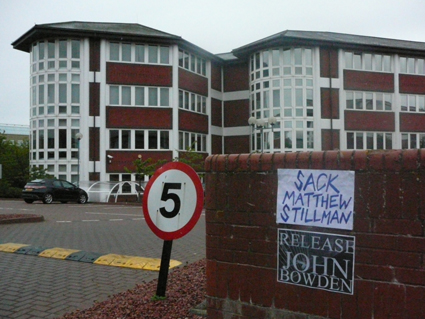 On Friday 13th July, the second international day of solidarity for John Bowden, demonstrators gathered outside the HQ of The Scottish Prison Service, The Gyle, to protest the ongoing detention of political prisoner John Bowden. Protesters met with police and SPS officals and had their voices heard while maintaining a peaceful demo.

The demo started at 3pm with a couple of protesters and a minor police presence. Most of the demonstrators arrived at 4pm to brighten the day around the SPS. It was a shame that, due to misinformation, protesters turned up outside Scottish Parliament also. After peaceful picketing and leafletting the protesters had their voices heard by the SPS director and Head of the prison guards. Staff took interest from the windows and smoking shelters, and took leaflets home after a hard days work.

The second meeting of the newly formed ABC Scotland will take place @ The Autonomous Centre of Edinburgh this Saturday 21st at 6pm. All welcome, and all views and ideas heard.