BAA added a new own goal to its string of recent cock ups, when it emerged the judge hearing their case today was not only a member of the RSPB but also a benefactor of both The Campaign for the Protection of Rural England and The National Trust. She declared her interest as part of the opening session.

All three organisations' members risk criminal prosecution if they breach terms of an injunction being sought by BAA in court today. 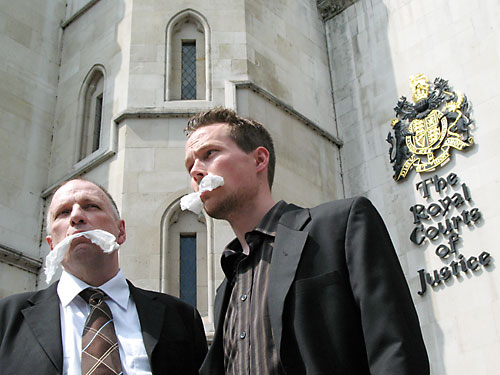 John Stewart and Leo Murray outside the High Court today

Timothy Lawson-Cruttenden, appearing for the claimants tried to extricate them from the mess they find themselves in by presenting a barely comprehensible argument resting on a definition of protester. He was, he claimed, only trying to injuct people from behaving unlawfully, yet the injunction application - now at draft eleven - still appeared to potentially criminalise five million people.

Come back in the morning, she directed, and give us a coherent skeletal argument.

Until that has argument has been delivered, understood and accepted the court has no idea what it is being asked to consider.

Lawson-Cruttenden then proceeded to offer evidence to support his application.

The crux of his submission is that there is evidence - much of it downloaded from activist websites - that direct action could occur. But it was a halting and muddled presentation.

Quoting NoTRAG he noted that its Chair had publicly welcomed Climate Camp. But he then quoted her as saying they weren't a direct action organisation.

And showing callous indifference for peoples' lives, he highlighted a NoTRAG spokesperson's statement that "This community will be destroyed if the third runway is built at Heathrow". This he said implied direct action.

This was offered as evidence IN SUPPORT of the injunction.

Press releases from the targeted organisations were full of "military language", featuring phrases like "we've got a fight on our hands". But other quotes were offered up from activists. Leo Murray was quoted as saying, "Peaceful direct action can make a real difference".

And whilst Lawson-Cruttenden delivered a pile of references from the the Earth First site, he made little of his first quote in which he stated that, as well as peaceful direct action, they make use of relevant legal process.

Even quotes from the airportwatch site seemed to contradict his statement that direct action was about fear and intimidation. "If non-violent direct action appeals to you" he read "see what Plane Stupid (web reference given) are doing".

The whole presentation (the defendants have their day tomorrow) was one of bumbling and mumbling, in which the prosecution had to be frequently helped to find its references by the defence team.

The judge cautioned against accepting newspaper articles - widely offered by the BAA brief - as evidence and at one point the defence counsel was forced to point out that words he'd attributed to John Stewart of HACAN weren't actually his, simply a comment pursuant to his statement.

The case continues tomorrow, and the court will probably not reach a verdict until Friday.