Friday 17th August: 16:30: Ten activists have occupied XL Airways offices in Crawley. One person is locked on inside the offices, a banner reads "Cheap Flights - Cheap Lives?" refering to links between the aviation industry and climate change, and XL's role in deporting people and children to the Congo on behalf of the home office. More updates on the ticker.

8.15am: At least ten climate change campaigners have blockaded the Department of Transport headquarters in London this morning. Several have superglued themselves to the revolving doors and other doors have been chained shut. Staff inside the Marsham Street building were seen giving thumbs up to the protestors who called themselves Climate Camp supporters. Two more protestors were on the porch roof with a banner reading "No Airport Expansion". Eventualy after around two hours the activists were removed and arrested. [See Press Release | Pictures | More Pics]

The camp has been having a lot of visitors throughout the day. The local scouts group came to learn about the camp for their environment badges and someone posted photos of yesterday’s visit by the local primary school which will be demolished if the third runway is to go ahead. Many local Sipson residents also visited the camp this morning to express continued support and solidarity and exchange experiences. 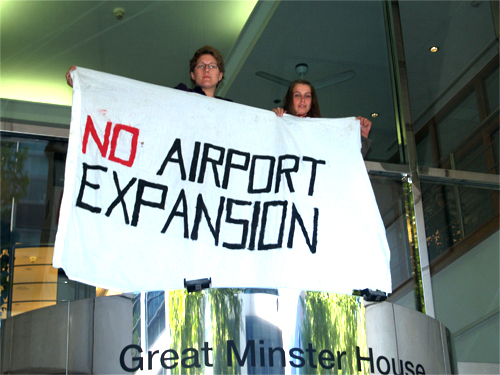