"If you go over there, I will facilitate your lawful protest" said one of the commanding coppers outside the action that took place at Agrexco on Saturday afternoon.

His idea of a "lawful protest" became clear very quickly as his officers pushed us into a kettle and held us there until people were taken out one by one and searched under Section One of PACE, before being sent on our merry way. FIT photographers were on hand to photograph each individual as they were searched. That 40 campers managed to get off site and to a known target in the middle of the heavily policed area is something else that FIT will have a hard time explaining to the powers that be. 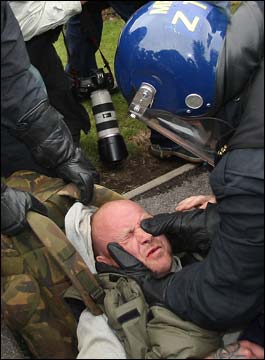 "A RIOT cop restrains a protester": The Sun (1)

Unsurprisingly the main stream media have all but ignored the widespread (ab)use of Stop and Search powers that Climate campers were subjected to over the duration of the camp.

The widespread use of stop and search is of course extremely dodgy, and it was also apparent that widespread abuse of the power had been sanctioned at a high level.

When searched on Sunday morning the officer (XB 125) failed to give me his name, and then proceeded to hand a half finished witness statement that I had in my pocket to DM167, who proceeded to "look after it" by reading it. I pointed out that it was beyond their powers to read my personal documents as they were searching me for items associated with criminal damage, and a flimsy piece of paper just wasn't good enough for any kind of criminal damage, but DM167 ignored me and read the whole thing.

Other searched I witnessed or heard of, included:

-Numerous people people outside the main gate being forcibly detained after their searches were over, until the FIT photographer arrived to take their picture. Physical force was used to make people comply with being photographed, despite the fact that nothing had been uncovered in the search.

-People being arrested when they were searched under Section One of PACE, taken to a van and 'de-arrested' once they had given their names and addresses. (Hint: Tell them you will only give it to the custody seargeant - that creates more of a dilemna for them)

An activist well known to FIT being held up for ages whilst they checked the IMEI number of her phone - (remember the basis of the search is suspicion of being equipped to commit crinimal damage). Whilst she was on her enforced wait, a plain clothes used the opportunity to make threats to her. She was with her toddler at the time.

-Activists waiting for the release of the arrested from the Agrexco action being searched a number of times in the carpark outside West Drayton nick on Sarurday night. When they went into the nearby pub cops followed them in, searched them and then got the pub to bar them.

-An activist had a FITWATCH spotter card confiscated because "it might be used in the commission of a crime" - ie the cop thought it might be used to single out an individual cop at a demo.

Needless to say, the searches did nothing to prevent the actions - the majority of campers left in blocks which weren't searched, and in any case people knew when searches were happening and when they weren't, so (just as Palestinians do with their equivalent - moving Israeli roadblocks,) any one intent on getting something in or out of the camp just had to wait for the right moment. Furthermore, few if any arrests were for criminal damage, and certainly it would have been less than 1% of those on camp (even if the number on camp was only 1000 as claimed by the cops).

For many of the locals this will have been their first experience of the political apartheid that protestors experience on a constant basis at the hands of the Met. Any reassurance they might have had about the PACE Code of Practice, will have been dispelled as they witnessed the heavy handed use of the tactic which was quickly backed up by the use of physical force if anyone objected to the abuse of the process.

Being stopped and searched can be a very disempowering experience, where your most personal space is trashed and your (alleged) rights are completely suspended, while the cops surround you, threaten you and abuse their powers. One person I spoke to was keen that complaints should be made about the individual officers who abused their powers, so that they were investigated, and the complaint would be left to sit on their file. If too many complaints sat on a coppers file, it could affect promotion prospects in the future. It may also be of assistance to future victims of these mindless, order following thugs in uniform. And ultimately it may make cops more inclined to do things by the book in the future.

Hopefully a happier lesson could be learnt from the events of Tuesday night, when an invasion of cops was repelled by campers. It is clear that if we show each other solidarity and work together, we can more effectively take on, and beat the repressive tactics of cops. And boy doesn't it feel good when we do!

FITWATCH activities received widespread support on site, as FIT teams were subjected to the very same tactics that they have themselves employed on activists for years. On the whole the tactic used was to get up close and personal, and to make every possible attempt to obstruct the civilian cameramen from taking their intrusive and abusive up close and personal photos of people doing nothing illegal. FIT teams were forced to focus their attention on those obstructing the camermen, leaving others alone to get on with what they were doing. Seeing a FIT cameraman drop his long lens was a very satisfying moment for me, as was each time I saw him with his shorter alternative lens. If the tactic is to be more effective, then plans for actions and meetings where FIT are likely to be present should include plans to tackle and neutralise the FIT teams. It only takes a very small group to keep a team busy for hours!

The usual bullshit was used to smear campaigners, with talk of "violent activists linked to J18", and "criminal elements invading the camp" "a secret group called 'The Elders'" and "suspect bomb packages" and the media lapped it up. At the end of the camp, when arrests and violence by protestors can be seen to have been much lower than the normal events in many towns on a Saturday night, the media continued to talk of protestors "scuffling with police" and "clashes between protestors and the police", even when such events were really protestors being attacked by heavily tooled thugs, as is even evidenced by the medias very own photographs. And journos wonder why we don't trust them and didn't allow them to freely roam the site!

Commander Joe Kaye also made the claim that "If we frustrate them, then they will go in for confrontation because their aim is anti-state. We are talking about anarchists." If you aren't an anarchist then presumably you just lie down for the kicking when the cops go out of their way to frustrate your so-called rights according to his feeble thought process.

At the end of the day, the bully boy tactics were frustrated and failed. As one of the first to arrive at the BAA building yesterday, I am pretty certain that they simply didn't expect protestors to arrive there, and there was a mad flurry to form lines around the building as we sat down to picnic on the verge right outside the building. Getting there was simple enough, we just hung back when they went in to form the kettle, and then strolled back down the road as cop attention was diverted by clowns making a break for it over the fields. There were so few cops, that when they tried searching after our picnic, they missed a whole group of new arrivals running to the carpark, and ended up being forced to abandoin the searches in order to deal with other stuff

For a long time protests in Britain, and especially in London have been unpleasant experiences, with the cops calling the shots most of the time, and searches and petty arrests being the order of the day. Those who have gone to express their anger and disgust at the greedy militaristic fuckwittery of the ruling classes and corporations, have ended up being boxed in, abused and crapped over by sheer force of numbers and a willingness on the part of cops to abuse their powers, whilst being cheered on by the journos.

Whilst Commander Kaye's policing operation went out of its way to give even more people reasons to hate the state, it seems that his cops were not up the task of totally repressing the activities of the camps, and once again the Met was shown to be less than useless when they are confronted with a field. We won some victories at the camp, and we should build on those in the near future. We are developing new tactics, and must combine these with our experience of the usual tactics to render them even more ineffectual in the future.