Asylum seekers, refugees, trade unionists and supporters from all over the North marched from the Home Office in Sheffield to Lindholme Detention centre near Doncaster between 26-28th October. The marchers were demanding "The right to work for asylum seekers" and stating that "Seeking asylum is not a crime." They finished at Lindholme immigration removals centre, the nearest such centre to Nottinghamshire, where asylum seekers are often held without having committed any criminal offence. The demonstration there on Sunday 28th was joined by supporters from Nottingham.

A rally was held at the fence of Lindholme and the marchers could hear detainees inside chanting in response to them. A candlelit vigil for those who'd died in detention centres was held and speakers from many countries, including the Congo, Zimbabwe, Sudan, Iran, Iraq and South Africa spoke. The demonstration is the latest in a series of protests at Lindholme making the demand to "Shut Down Lindholme!" 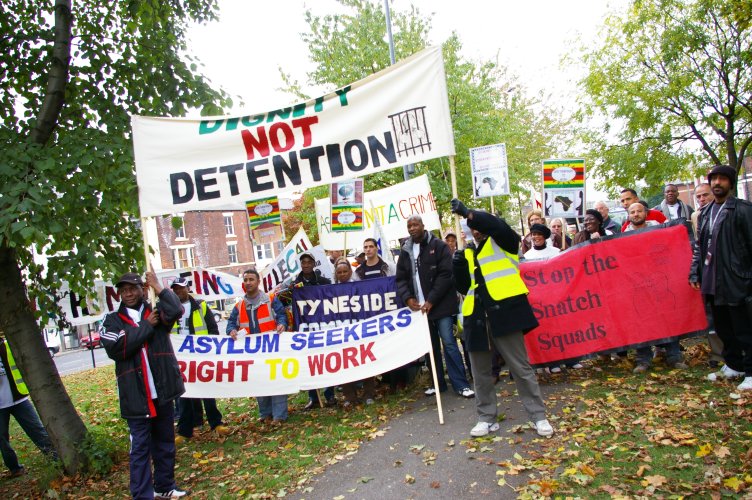 The start of the "Dignity Not Detention" march on Lindholme (Pismmoor)

Did you know that people seeking asylum in this country are not allowed to work? Rather than face destitution or criminalisation they are forced to work in unregulated jobs, often with the lowest pay and the most dangerous conditions in industries which already use casual labour to drive down wages and conditions for us all. Therefore we demand the right to work.

Politicians and vicious media campaigns spread myths about 'scroungers' and encourage people to believe that refugees rather than the politicians themselves are responsible for housing shortages and unemployment. Yet asylum seekers are given no special priority for council housing and are given benefits below the minimum allowed for British nationals.

Asylum is not a crime

Over 40,000 asylum seekers pass through the UK's 10 prison-like detention centres each year. Unlike prisoners, they have no release date, few legal rights and have often committed no criminal offence.

Government restrictions on legal aid make it almost impossible for asylum seekers to appeal against their detention without trial. While civil war and human rights abuses are condemned by the UK Government in Zimbabwe, Iraq, Afghanistan, Iran, Sudan and elsewhere, exiles from these countries find themselves detained without legal support, facing deportation and death.

Staff at this former prison treat detainees as offenders, rater than recognising that they have not been convicted of any crime. Run by the Prison Service, Lindholme "Immigration Removal Centre" near Doncaster holds up to 112 male detainnes. An unannounced inspection by HM Chief Inspector of Prisons in 2004 recommended that the Government "should review whether Lindholme is an appropriate facility for an immigratin removal centre" due to it being "deficient in all four of our key tests: safety, respect, purposeful activity and preparation for release". Inspectors noticed Prison Officers shouting in English to non-English speaking detainees and a lack of interpreters.

People in Lindholme have left their homes and families to escape war, torture and dictatorship in their own countries. Yet the UK Government invades Iraq and Afghanistan; it helps western companies plunder £millions of resources daily from places like the Congo in Africa while proxy wars rage; it works with corrupt regimes around the world and then it tries to imprison and deport people who seek safety in this country.

Does the government speak for you when it acts like this?