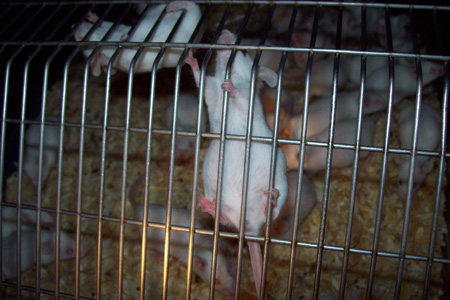 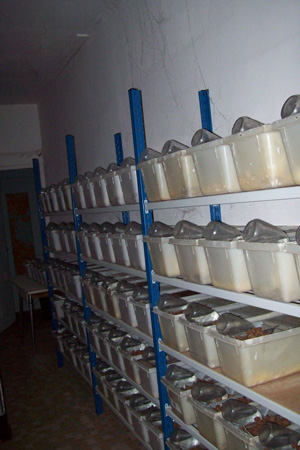 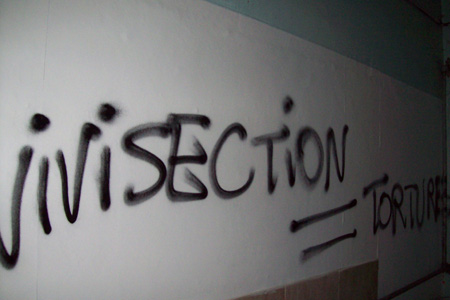 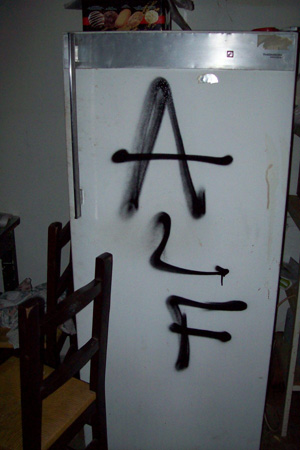 "Animal liberation by French ALF :
Animals destinated for vivisection have been stolen + sabotage.

During the night of Thursday, December 27, 2007: a breeder for animal experiments in the north of Paris was ALF's target!
Address: Le centre d’élevage d’Ardenay, Domaine Saint-Louis, 95710 Bray et Lu.

The facility was very dirty, with a very bad smell. We found thousands of mice and rats in cages, some frogs alive in an acid bath, cockroaches and grasshoppers kept alive on placards.
In each room, there were many freezers with dead mice, rats, chickens, pig hearts and lamb hearts inside.
Many buckets with a strong liquid inside and dead frogs, dead insects, cow’s eyes, rabbits eyes.
Animals, alive or dead, are sent to laboratories, high schools and to people across France.

We saved insects, who we freed outside in a field and frogs in a lake. Some mice and rats were saved and are now in good, anonymous families.

We sprayed slogans on the walls in each room: 'VIVISECTION = TORTURE!' 'YOU WILL PAY!' 'WE ARE WATCHING YOU!' 'WE WILL COME BACK!' and 'ALF.'

With this action we sabotaged the murder of innocent, defenseless non-human animals.

As long as the desire to kill outweighs the ethical arguments, we will continue nonviolent resistance."

"On December 28th, three cells of the Animal Liberation Front in Mexico coordinated actions against cruel and disgusting speciesism. They carried out the following actions:
- attacked a pet shop with paint bombs
- attacked another pet store with paint: NO MORE ANIMAL PRISONERS! painted on the walls and floor.

"On Christmas Eve, December 24, we brightened up the homes of the governing board of Van Der Looy Projektmanagement.
On Rubenslaan 19 in Weert, and Van Goghlaan in Weert.
Van Der Looy is participating in the construction of Science Link, a new commercial animal testing center. We sprayed slogans, 'stop Science Link, stop animal tests' and 'DBF.' We call on you to stop the construction or stop your participation in it. This time it was only paint; next time we will not be so pleasant. Until next year."

"With the coordination of cells from ALF Mexico and the ALF Comando Verde Negro, KFC was attacked. Bulbs & bottles filled with paint were used on their floor, windows and walls.

NOW IS THE FIGHT, THE FUTURE IS OURS.
GO VEGAN"

reported by activists in Spain (translation):

"Until the end of cages and those who use them... On December 21 in connection with the holidays, the FLA decided to visit our friend DuPont, a collaborator in HLS' daily killing within their laboratories. Now you know what we have in mind, don't attempt to silence or smooth this over, this is not the place for that . . . cut your ties to HLS now!!

This Christmas stones rain down."

reported by activists in Germany (translation):

"Hunters have only one objective: the ambush and killing of countless animals.

Reason enough to be against them. On December 15-16 we sawed 9 hunting towers and two individual seats, making them unusable. Three of the hunting towers were 8 meters tall. The location of the action: Krombach-Kreuztal/Altenkleusheim in NRW. Combating hunting without question...."

Early in the morning on December 24th a Kleider Bauer store in Vienna's 10th district was hit by the ALF. Activists injected butyric acid into the shop.

reported by activists in Germany:

Around X-mas, three large display-windows of an Otto Graf store (fur retailer) in Vienna were etched.