The annual slaughter of baby harp seals has started off the east coast of Canada in Newfoundland. The slaughter of over 325.000 baby seals has been widely condemned around the world, but the Canadian government is ademend in its continued support for the barbaric mass killings. The EU is said to pass legislation this year to ban the sale and/or export of seal products within its borders.

Last week, the Sea Shepherd Conservation Society ship 'Farley Mowat' set off from Bermuda to make its way to the killing fields. The last time the Sea Shepherd went out to confront the seal hunt was in 2005 when eleven Sea Shepherd crew were arrested. The aim of this year's 'Seal Defence Campaign' is to try and document the atrocities. In Canada it is a crime witness a seal being killed. Never mind going out there purposefully to document whats going on " It is a crime to take a photograph of a dying seal. It is a crime to video tape or film a sealer doing his grisly work. Unless you have a permit and the government is not granting permits. And the regulations that ban anyone approaching the slaughter are actually called the 'Seal Protection Regulations'." 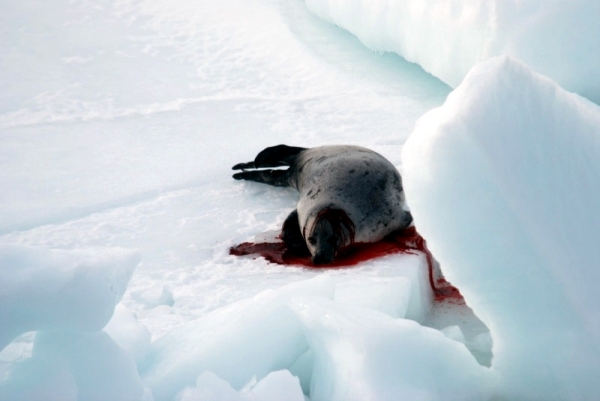 Also on the newswire: Canada Orders Sea Shepherd to Stay Away from the Baby Seal Slaughter

In 2005 eleven Sea Shepherd crew were arrested after being attacked and assaulted by sealers on the ice. Despite being struck by sealing clubs, punched and kicked, not one sealer was arrested for assault. The attack was video-taped and the sealers identified yet the Royal Canadian Mounted Police stated there was insufficient evidence to charge the sealers. The Sea Shepherd crew were jailed and fined for approaching within a half a nautical mile of a seal being killed. Captain Paul Watson of the Sea Shepherd ship has been fighting the Canadian seal slaughter since 1976. The commercial hunt was shut down in 1984 and resurrected in 1994.