Yesterday April 1st, which as you all know is international Fossil Fools day the offices of Y&R advertising were paid a visit by London Rising Tide. Outside the Camden HQ activists did a spoof marketing campaign by Y&R who are currently trying to convince the public of Landrover’s green credentials…!!?? One of their employees was initially quite angry ansd bewildered by what was happening. Though in fairness he did calm down and see the funny side making numerous cigarette breaks to come outside and chat to the activists and their polar bear.

Meanwhile inside the building some other people posing as corporate clients gained access to Y&R and barricaded themselves inside one of their offices. The Police eventually showed up in force and nicked those inside. Which is exactly what they wanted as any charges will bring a nice big PR disaster to Y&R. Nice sunny day for it too…. 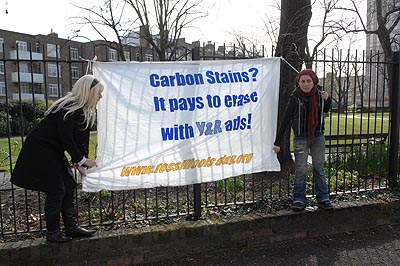 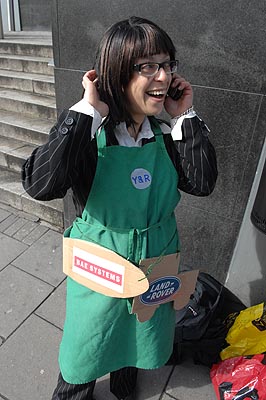 "Hello Y&R advertising, how can I help you?" 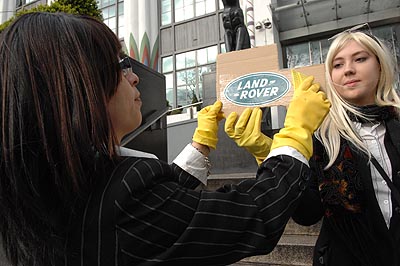 "Yes we can remove even the toughest enviromental stains." 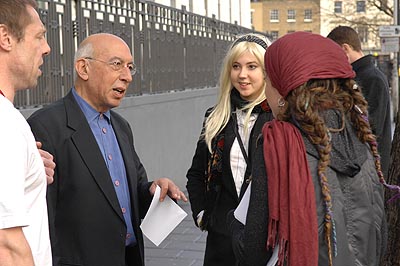 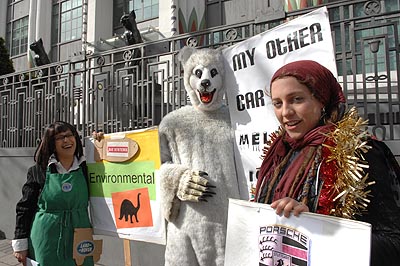 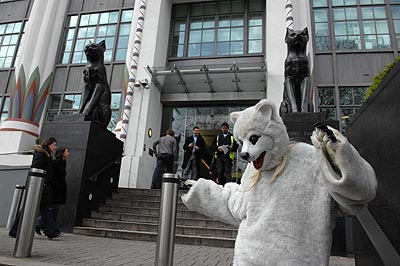 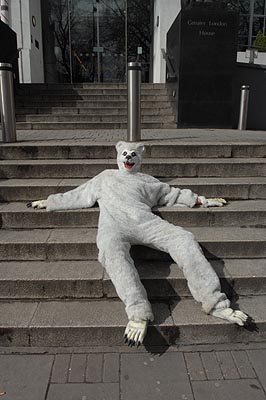 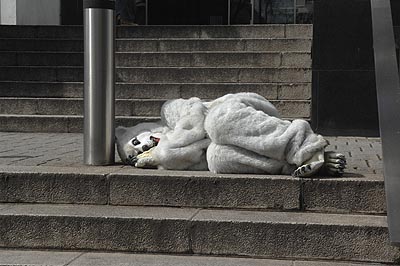 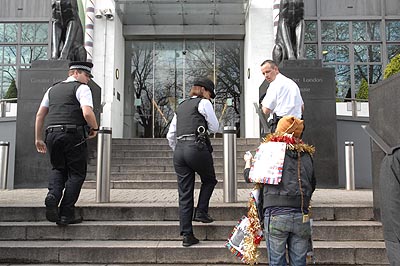 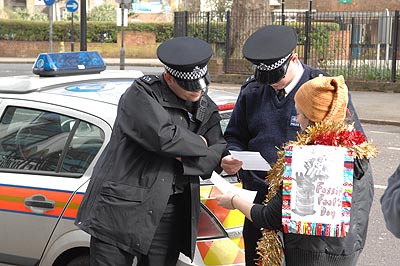 ...yet more cops arrive. What is happening inside? 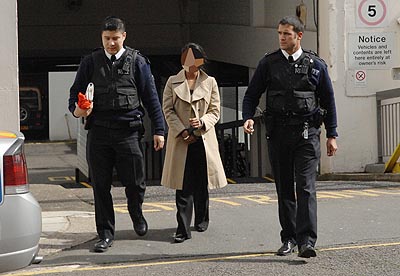 Ah, they seem to be arresting Y&R ad people. 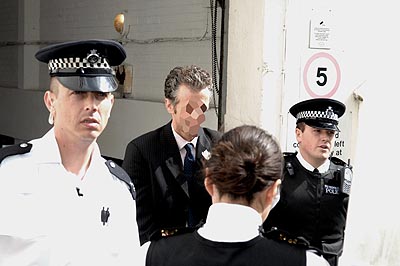 Presumably for missleading the public over Landrover?

Spoof Press Release which some gullible outlets actually fell for:
** 9am, 1.4.08; for immediate release ***

Leading advertising agency Y&R is proud to reveal that it will be
spearheading a major advertising and overall branding campaign for the new
Harrion® Civilian Jump-Jet. The Harrion® - the civilian version of the
Harrier - is the centrepiece of HarrionProjects, the newly-privatised wing
of the UK Ministry of Defence.

The campaign will be modelled on Y&R’s hugely successful work for Land
Rover, which combined rugged locations, spectacular photography and a
prominent claim to ‘offset’ the CO2 produced from the first 45,000 miles
of driving. The company which arranged the offsets, ClimateCare, is also
on board to offer the same service for the Harrion®, (which has an even
healthier thirst than its land-based brother!)

Y&R’s Bernard Donovan said “This is a dream come true for us, and not only
because so many of our lads grew up ogling Harriers back in the Seventies!
Seriously, we see a great future looming for the Harrion®, and we can’t
wait to get out there and help mould public perceptions of it.’

Mimi Santoria of HarrionProjects added ‘There’s nothing to stop the
Harrion® becoming the world’s most iconic personal transportation
solution. And with ClimateCare part of our team, there’s every chance it
will come to be regarded as a zero-emission 21st Century green zeitgeist
machine!’

Mick Martin of ClimateCare said ‘CO2 offsets are literally taking off
throughout the western world. We’re ready to jump into action and carbon
neutralise the Harrion®’s admittedly challenging 0.3 miles per gallon in
the same way as we have for Land Rover. This is our first major deal since
being acquired by JPMorgan, so we really are flying high with the big
boys!’


Activists from climate justice direct action group London Rising Tide
(LRT) have occupied the offices of Y&R, the ad agency behind the current
Land Rover campaign, and a new campaign for arms giant BAe Systems. This
is one of many actions taking place worldwide on Fossil Fools Day, a day
of action called by the Rising Tide network. Outside the office, climate
street theatre is also underway.

The LRT activists are posing as executives from a newly-privatised wing of
the MoD called HarrionProjects, a spoof company whose centrepiece is the
Harrion®, a civilian version of the Harrier Jump-Jet. LRT has issued a
spoof press release saying that Y&R has agreed to launch the Harrion®
marketing campaign, and also that ClimateCare, the CO2 offsets company
which is working to ‘offset’ Land Rover emissions, has agreed to do the
same for the Harrion®, even though the Harrion® only manages 0.3mpg.

LRT’s Sam Chase said: ‘It feels good to be joining other climate justice
activists around the world on a day when traditionally the world is turned
upside down. Fossil Fools Day is about using foolery to reveal the
insanity of the current fossil-fuelled market madness, an insanity whose
intensity is stoked to a great extent by the advertising industry.

LRT’s Mimi Santoria added: This is the first time an ad agency has been
targeted by climate justice campaigners – it’s long overdue, and it
certainly won’t be the last.’