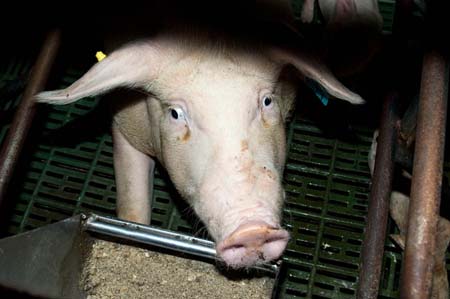 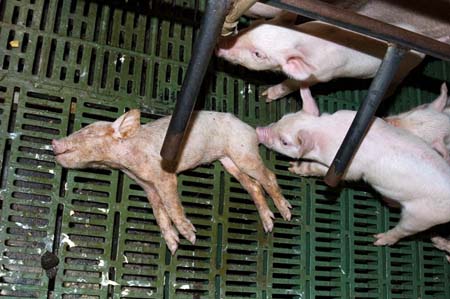 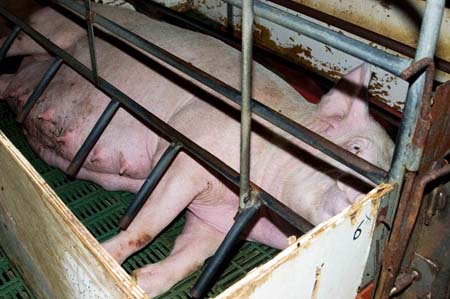 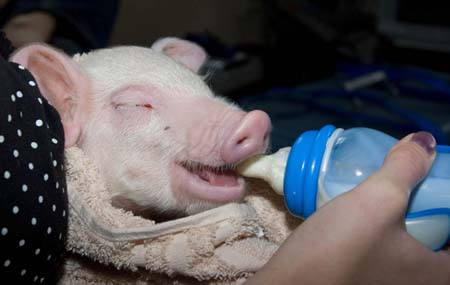 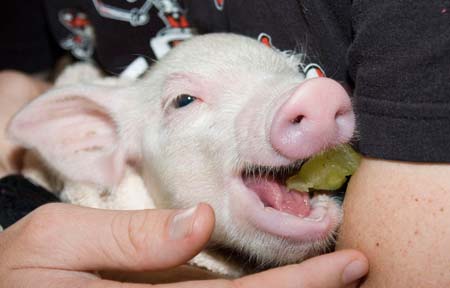 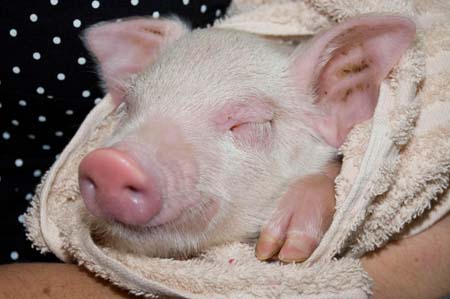 http://www.directaction.info/images2/NZ_piglets_May08/FrameSet.htm
The piggery investigation and rescue documentary can be viewed here:

“We witnessed sows in farrowing crates anguished in extreme confinement. These mother pigs were unable to walk or turn around, let alone able to interact with their babies. Our team also documented many dead piglets, one of which had been severely cannibalized.

"We rescued two female piglets from this horror, placing them into a wonderful newhome. We did this so that these young females will never have to endure the suffering and deprivation that their mothers experience.

“This Mother’s Day weekend, we urge the New Zealand public to spare a thought for sows imprisoned on intensive piggeries across the country. Boycott pork and help bring an end to this cruelty”, says Ms. Sims.

VICTORY ON THE STREETS OF STOCKHOLM (Sweden)

Yet another fur store in Stockholm, this time furrier Catherine Jonsson on Riddargatan, has thrown in the towel after an intense campaign of direct actions. The store is now empty, the signs have been taken down and the only thing that reveals the old identity of the store is the red paint splashed on the store front. A facade that show memories from animal rights activists who refuse to accept that animals are bred and killed for their fur.
Many stores have the same destiny as this one, but your help is needed to close them all. - DBF"

"Before the animal genocide, a radical response!

On the night of May 9 in a small town in Mexico State, the luxurious white pickup truck of the owner of a large restaurant that buys the bodies of innocent animals killed for money, received special treatment by the Frente de Liberación Animal, because while the speciesist bourgeois and his lackey aides were sleeping in their business for fear of being targeted for another attack, his truck paid the price with liters of red paint spilled leaving it completely ruined.

"Winteringham Fields produces 6,000 dishes of foie gras a year for their salivating customers. This sick obsession with the abuse of ducks and geese is fuelled by people like McGurran who insist that giving people the freedom to abuse is the right way to go about business.

Well, as of today, your diners will be realising the liability that serving up such a heinous dish can prove.
I suspect the owner of the nice car in the drive won't be going anywhere for a while, until they get four new tires, and when they do get rolling they'll be able to show off the new paint job.

When your customers are deciding to visit perhaps they'll consider that just one day, it could well be their vehicles getting the treatment. But, as we all know, that is NOTHING compared to the sheer hell that restaurants like Winteringham fields choose to inflict on ducks and geese.

Until the geese and ducks are free from the gavage sheds, we will take action,

BUCKETS OF PAINT CREATE A MESS AT FUR STORE (Sweden):

"May 8th - Taby; Tonight the DBF took another big step toward our goal of a fur free Taby; tonight we trashed the facade of Carlssons fur store. First we glued the locks, then we emptied a spraycan over the store and threw two buckets of paint over it and finished off by throwing stones through the windows. We will not give in until all Stockholm suburbs are fur free! - DBF Danderyd"

Q HOTELS GETS A VISIT (UK)

"After the Queens Hotel in Leeds hosted the greyhound killer awards, it was time to take the message direct to Head Office. Windows and walls were spray painted and locks glued.

Despite workers being on site, flood lights and 24hour security one wall away, it still seems Blakes Meat Specialists just can't keep outta the action. ALF Karma police tracked them down at their main depot in Sussex and slashed tyres on 5 of their vans and a workers vehicle.

This is the new age; there is no longer a place in society for murderers who reap reward from pain and death. The loss of animal's lives will now result in the loss of profits and we are here to make sure this happens.

With love and hugs to all those who act to save animals, you know who you are.

And to those who abuse animals, wait and see what's coming next. Your abusing ways are over.

- - 20 or so signs sliced, removed or painted.
- - DBF (ALF) stickers put-up on sign-posts where the now sliced
signs used to be.

With this action we (DBF-Småland) want to raise public awareness about the horrible cruelty that circuses bring.

In the night between monday and tuesday we have locked four furriers shops and two shops for hunting and fishing. The next day we have seen the bastard owners working under the hot sun to repair their keyholes."

"May 6th - Stockholm; Goran Larssons fur store was hit once again. This time rocks were used to smash the door bell, neon sign and the air conditioning system above the entrance. Fur is Murder. - DBF

May 6th - Stockholm; All four windows at Master Furs was smeared with glass etching fluid. - DBF"