The rally in the park included info stalls and food/drink from Veggies before campaigners marched through Peterborough. The demonstration ended in Alconbury, so to meet the animal abusers who kill 500 animals every day of the week to test products such as weed killer, food colourings and drugs.

Details: Webpage for the rally, march and demo - Info and times | Rally in the park - Map and meeting point 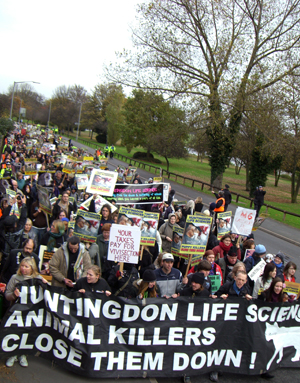 SHAC campaigns for the closure of HLS using evidence obtained in five undercover investigations at their different laboratories in the UK and USA where HLS workers have been caught on film punching puppies in the face, simulating sex with animals in their care, cutting open primates while they are still alive and falsifying experiments to get products on the market. HLS workers have even been caught drunk at work and dealing drugs at the labs.

Mask up and unite as one against NETCU, SOCPA & police repression:

Gregg & Natasha Avery and Heather Nicholson were arrested and remanded into custody after 32 separate police raids, involving 700 police officers in the UK, The Netherlands and Belgium on May 1st 2007.

They have been charged with "conspiracy to blackmail" Huntingdon Life Sciences (HLS) and they are currently being remanded in prison. Their trial is booked to start on the 29th September 2008 at Winchester Crown Court (UK) and might take as long as six months.

12 other activists have been charged with "conspiracy to blackmail" and are awaiting trial and due to the number of defendents their will most likely be 2 seperate but connected "conspiricy to blackmail" trials one after each other. With the last trial (each trial may take as long as 6 months) probably not starting until April 2009 at the earliest. The 12 SHAC activists are currently on bail, with severe bail conditions preventing them doing any animal rights activities at all, or even leading a normal life and it appears that some of them will be on bail for years.

All the activists deny the charge being all completely innocent. This politically motivated "conspiricy to blackmail" charge carries a maximum 15 year prison sentence.

There is also going to be two other trials relating to the raids on May 1st 2007, one involving activists accused of allegedly liberating a dog from abuse (this was an animal rights action but not SHAC related, however the police are claiming it is) and one envolving the alleged theft of information from a employees place of work. Their are 18 defendents in total and one activists is facing two separate trials.

HLS is the worlds most exposed, brutal and vile animal testing lab, it helps no one and hurts many, please get involved if you possibly can. (please visit SHAC's website).

On the 21st July last year, Natasha had a release licence from a previous unrelated sentence for animal rights actions revoked, due to the new "conspiracy" charges against her. She is no longer classed as a remand prisoner and she is now serving out the time on her previous sentence. When the time left on her sentence finishes she will be put back on remand. This in practise just reduces her privileges and means if convicted she may not be able to use the time she has served not on remand to offset any sentence.

A letter from Heather read out at the SHAC national in November:

---
Gregg, Heather and Natasha have said on many occasions the best way of supporting them and the other defendents is to get out there, do demos, write letters, do what you can. There are campaigners fighting HLS all round the world so please if you can please get involved. (SHAC).

You can also write to them:

You can email Heather and Natasha through www.refusedbail.com, emails cost 30 pence (£0.30) each and are delivered directly to them. The emails are all read by prison authorities and there is no facility allowing Heather or Natasha to reply. It is however a good and relatively cheap way of showing your support, especially if your based overseas. 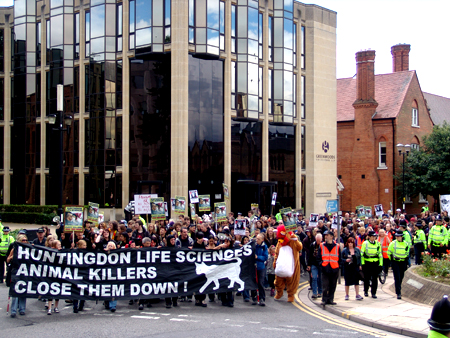 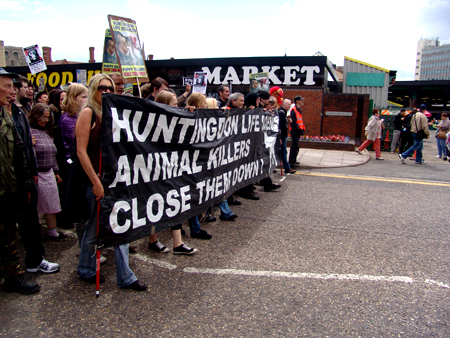 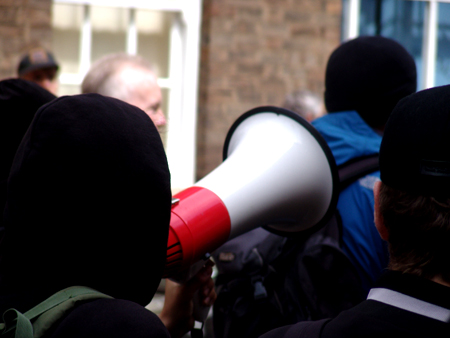 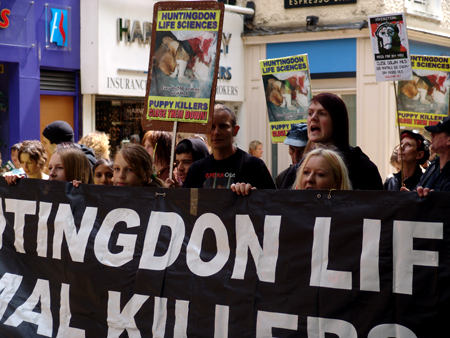 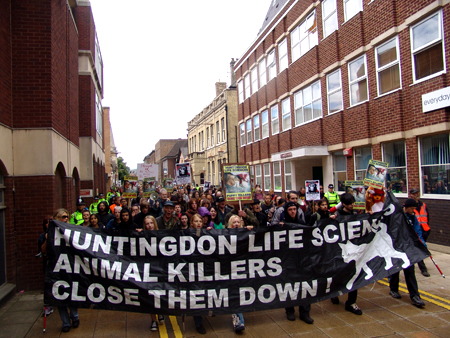 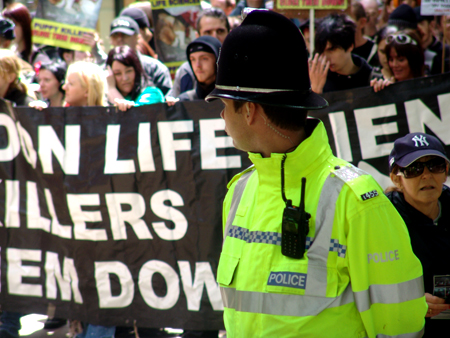 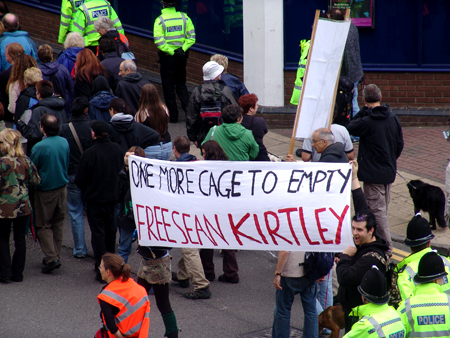 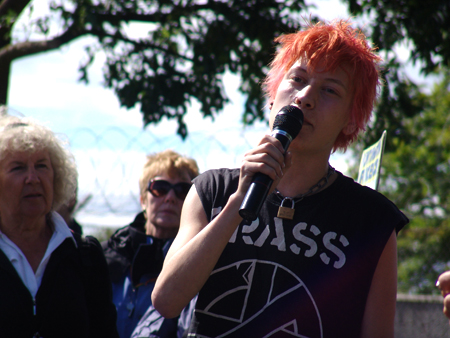 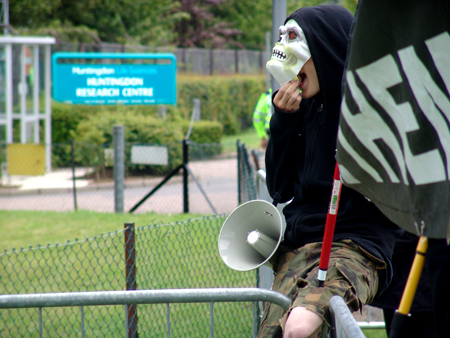 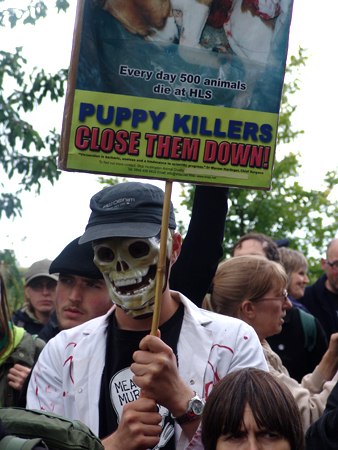 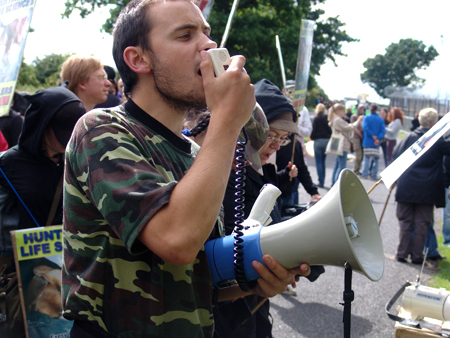 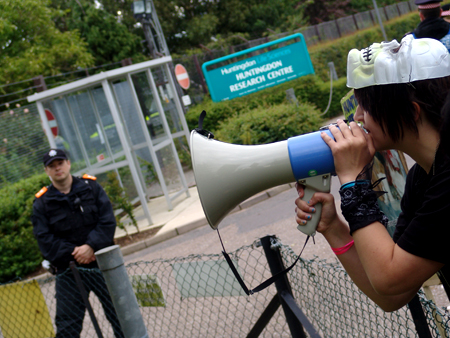 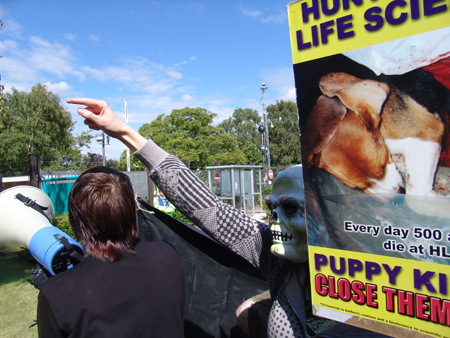 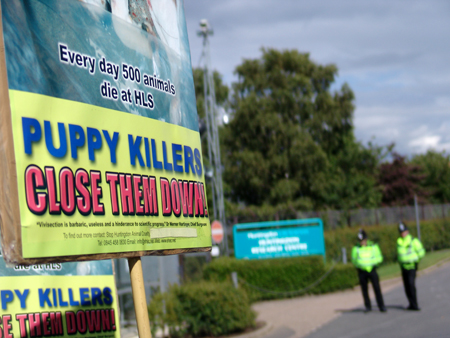 Photos from the SHAC National March & Rally 2008 in Peterborough, followed by a demo outside the gates of hell itself.