Carmel Agrexco's Depot Shut Down in Commemoration of the Nakba

In the early hours of Saturday morning, activists occupied and shut-down the HQ and only UK freight warehouse of Carmel Agrexco - Israel's largest agricultural exporter from the Occupied Palestinian Territories. The occupation held for over 6 hours until they were forcibly removed at 12 noon.

During the occupation over 10 loading trucks intended for the warehouse were sent away. British supermarkets - accounting for 60% of Carmel-Agrexco's total exports - had some of their orders affected. The Israeli government has a 50% stake in the company. Exports include flowers, avocados and herbs grown in illegal Israeli settlements on occupied Palestinian land.

Further reading: Text of letter to Carmel-Agrexco | Report on Carmel's involvement in the Jordan Valley | War on Want's report: Profiting from the Occupation 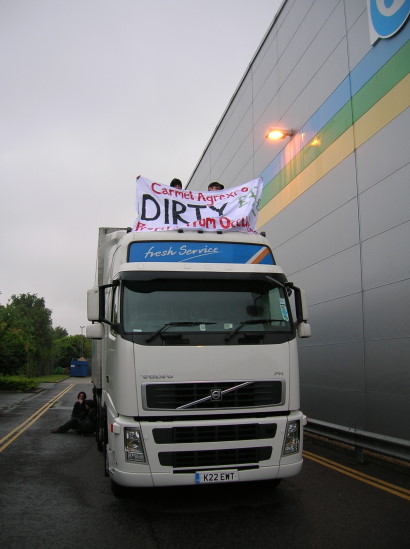 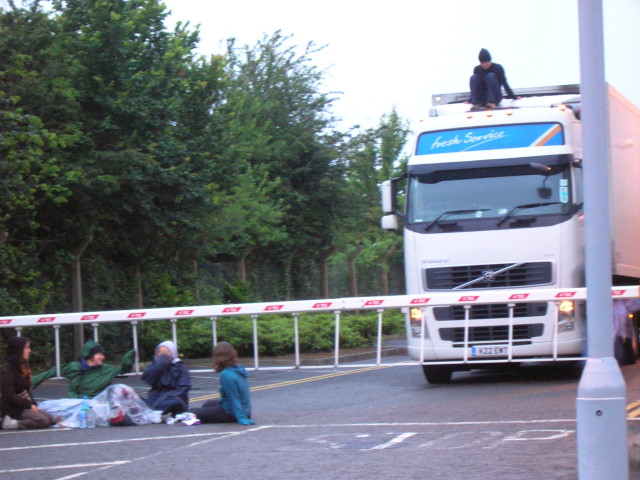 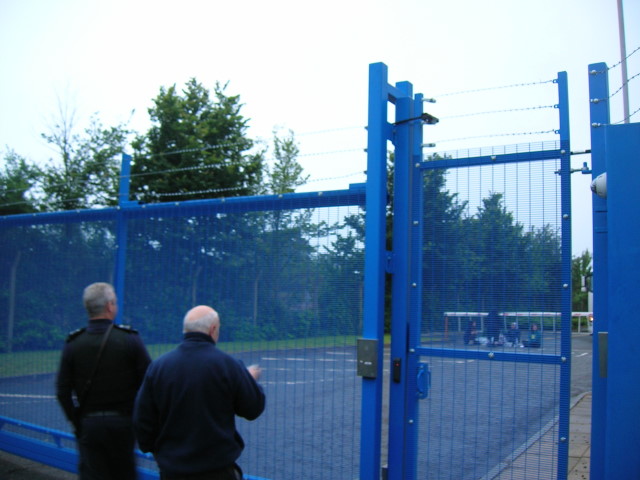 Early in the morning activists occupied and shut down operations at the Carmel Agrexco warehouse near Heathrow Airport by D-locking themselves to gates and to a lorry within the compound. Two activsts locked to a vehicle barrier, one to a truck and one to a main gate. Others climbed on top of the truck to further immobilise any loading or unloading work, and suspended banners. The Israeli flag that usually flies over the Carmel compound was removed and replaced with a black flag in mourning for the people of Gaza.

Tom Hayes said 'Agrexco is responsible for human rights crimes against the Palestinian people. The British supermarkets which buy produce from Agrexco are also complicit. Handling stolen goods is an offence whether the offender is a supermarket or an agribusiness. Agrexco must be held liable for its "unlawful business".'

The action was timed to commemorate 60 years since the Palestinian 'Nakba' (Catastrophe) - the theft of Palestinian land, massacres, expulsions and creation of over 700,000 refugees with the founding of the state of Israel in 1948.

Agrexco employees, finally fed up of being cooped up in their office for hours, come out to confront activists and fume over the disruption to their business. When they saw me taking video of them pushing activists out of their way, they went absolutely bonkers, and were screaming at the cops to confiscate my camera. The man in the orange shirt went the usual route of lecturing us to get a job and go home and enjoy a full english breakfast like 'normal' folks, while his mate in the black and white hoodie ( a particularly stupid thug) behind showed his disapproval by gesturing to his brain.... They tried to play the disruption to business down, but after many hours of turning away lorries (one driver claimed he would try not to do business with them anymore - whether or not he has any say in the matter is debatable), and police ination, they were clearly distressed. They were also totally baffled as to how activists easily made it over their new state of the art security fence! Hint: rhymes with mallet, mate.

3 interesting things about the action

1) One of the workers compared the security fence to the separation barrier through the West Bank, he said, 'We paid £30,000 for this, and you still managed to get over it'. Yes we did and guess what, we and loads of other activists are going to do it again!

2) At least one Stop and Search note (everyone was SUSsed afterwards) contained the definition of the search as 'suspect had committed aggravated trespass' - the police knew exactly which charge, according to the Law and police protocol, would normally have been applied, even going so far as to write it on the search form! Well, this was early in the morning for them and they had no sleep and nowt but drizzle and huddled activists singing and playing charades and waving banners intermitently at passing trains to look at.

3) One police officer was asked, 'why havent you arrested any of us? What would you do if a load of activists locked on to your work vehicle in your driveway and prevented you from doing your business!!'? He replied, 'Its not in the public interest', to which he was asked, 'what do you mean the public interest?' He said, 'It has been decided that you shouldnt be arrested because its not in the public interest'. 'According to who? Who decides whats in the public interest?', he said to that, 'Its above my station, It goes all the way to the top', to which he was asked, 'What, so Ian Blair (Police Commisioner of London) has decided we shouldnt be arrested?'. He said, 'Yeah, him, and further up', all the way up to the top'. So, it would appear to be not just police and Agrexco security guards colluding, but government ministers/authorities too, to keep Agrexco's unlawful business of handling stolen goods, out of the public eye. But its too interesting and essential to expose to be kept out of the public eye, which is why we need to keep up the pressure until it gets there and we all partcipate in the shutting down of Agrexco and its' role in perpetuating and profiting from the occupation.

One way we can reclaim this definition of 'public interest' is by taking sustained direct action and pushing this campaign forward and making getting it onto action, media and movement agendas.