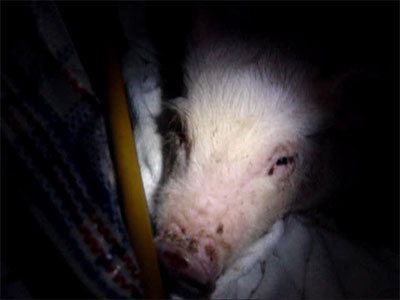 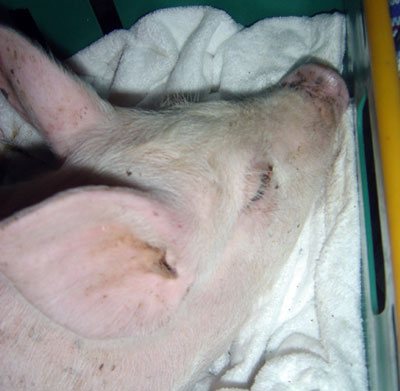 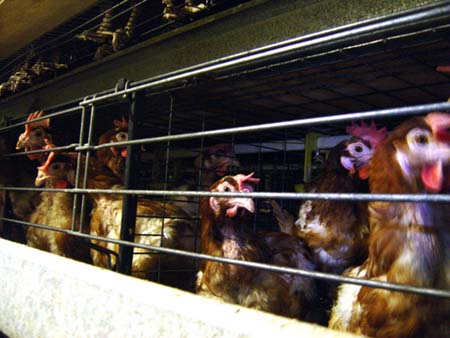 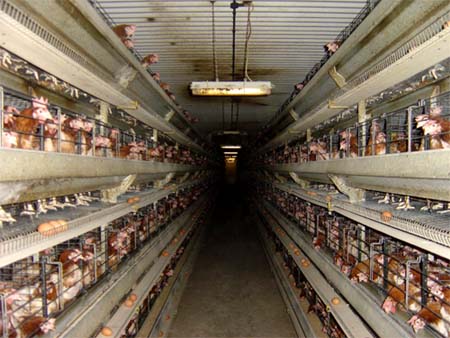 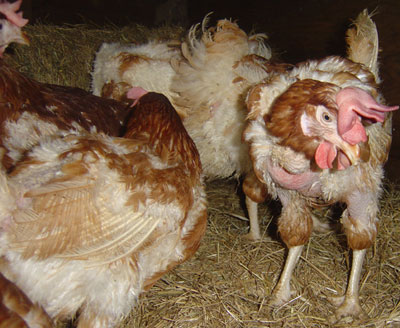 "With one more comrade behind bars, we decided to turn to a more direct form of action. Sean Kirtley got over 4 years for editing a website. So why bother doing anything legal?

Taking the message from the government loud and clear, we took up the tools of liberation during the night and made our way to an egg battery farm south of York. We 'broke in' by opening the door to the lower section of the farm and climbing up to the cages. Over-night we freed 250 hens and took them all to new homes across the country.

This action is dedicated to Sean whose spirit will still be outside those bars helping animals in the face of government stitch-ups and a corrupt legal system.

The change is in our hands, the battle has just begun...
The Animal Liberation Front"

"To all of the activists who went to speak out against Staples' continued support of the murderous Huntingdon Life Sciences this weekend we would like to apologize for not showing up to be by your side. We instead took a little drive south to spend the weekend in Orange County. You should have seen how pretty the beaches were last weekend, the ocean was exceptionally gorgeous and even warm enough for a quick dip. Anyhow, thanks for organizing and showing up for the weekend of action demos.

Oh, and by the way, we did spend our afternoons last weekend visiting as many of the OC Staples locations as we could. Direct action walked right in the front door. We flushed compressed sponges down quite a few of Staples' easily accessable toilets followed by handfuls of toilet paper. Several Staples stores should be making expensive phone calls to plumbers this week. (our recipe: kitchen sponge, rinse, ring out, fold as small as possible, bind with rubber bands, let dry until stiff then flush away.)

Hey Staples, announce that you dropped HLS. We can be creative and we won't stop.

"JUNE 23RD- MENDRISIO SWITZERLAND
AS WE DISCOVERED THAT THE ITALIAN COMPANY UGO BASILE
HAS AN OFFICE IN MENDRISIO WE DECIDED TO ACT AGAINST
ITS FILTHY AND CRUEL BUSINESS.
UGO BASILE BUILDS TORTURE EQUIPMENT FOR VIVISECTION
LABS AND PROFITS FROM THE SUFFERING OF ANIMALS.
THIS NIGHT WE REDECORATED THEIR OFFICE SHARED WITH
OTHER COMPANIES USING A LOT OF PAINT AND LEAVING
CLEAR SLOGANS ON HOW THIS COMPANY MAKES BLOODY MONEY.
FOR ANIMAL LIBERATION"

June 8th: The furrier Åke Anderssons shop got their marquees sprayed
with red paint from a water pistol. - DBF

June 12th: Slogans was painted at the home of Karin Lundmark,
co-owner of Lundmark fur shop. On the walls on Åsögatan 168 one now
can read 'Lundmark murderer'. - DBF

June 14th: The family that run the fur shop Lundmark was visited by
activists. Slogans was painted outside their apartment to let
everyone know what cold blooded killers that live on Skulptörvägen. -
DBF

June 17th: The metal gate outside fur shop Lundegren& Peters was
locked with a u-lock. - DBF

June 17th: A lone activist emptied a can of spray paint on furrier
Eva-Carina. - DBF

June 18th: In a single strike activists targeted both the shop and
houses of the owners of the fur shop Lundmark AB. The shop was
covered in paint and tar and the houses was sloganized. From now on
the animal abusers take their work home with them and we will always
be a part of their work. No mercy - all out war! - DBF

June 19th: Instead of celebrating midsummer according to swedish
traditions we choose to dance on the future grave of Elsons fur shop.
The steps leading up to the entrance was covered with litres of tar.
Happy midsummer from the animal avengers. - DBF

On the night of June 23 a pet shop in the eastern part of Mexico City was painted. It was very pleasant to see the look of concern on the face of the owners who didn't know what to expect since yesterday night, June 24, we returned and a few red paint bombs were thrown on the facade. Seconds after leaving, it appears that the owners arrived in a car in the middle of the night. Though many of these actions may not seem important, for us it's a very good way to make life more difficult for these traffickers and to remind them at each moment that that is what we are doing.

"The ALF are claiming responsibility for a piglet liberated from a farm in the UK. She was found living in a bare concrete enclosure with many other piglets; her life in the hands of murderous animal abusers. Action was taken and she has been taken to a safe place where she can be cared for and be free.

Dedicated to imprisoned Austrian activists!
Until all are free!
ALF x"

"Two more fur shops give in to the actions in the Swedish capital!

When we recieved notice that the fur shops Skinnkompaniet and
furrier Eva-Carina in Stockholm will join the growing number of fur
shops that have closed in the last year it hit us that we are close to
winning the war against the bloody fur industry. The fur shops are the fur
industrys face to the public and after all the actions with paint,
etching fluid, tar and stones they are in serious need of a face
lift. So far seven fur shops in Stockholm have taken the wise decision
to close down in the last 12 months. For the remaining shops only one
question remains - how much money do they want to have left in their
savings account when they retire? We suggest that they close down and
place their money in a good pension insurance instead of sticking in
against the DBF. We guarantee that you will never profit from selling
fur again. - DBF"

"Örebro, Sweden
June 22nd: Leather shop Skinnmäster in Lillån had several windows
smashed. A few days before the shop was covered by the slogan
'Murderer'."

"On thursday 12 of june we freed a wild boar in Caceres. We opened the fence that kept him encaged. This easy action has given back freedom to an animal that was waiting to be murdered by hunters.

We want to show our solidarity with our Austrian comrades repressed and to every animal liberation activist in jail.

"We have for a while now known of a pheasant breeder outside Enkoping,
but we chose to act only after hearing about the other raid from
another hunt breeder. At the farm we realized that the farm was for
sale and only a few birds were still in the cages. To make sure that
the new owners of the farm will not continue to breed pheasants we
opened all remaining cages and about 20 birds took off. Torstuna
fasaneri is now history. - DBF"