Most of know what happened since, but let’s start in the beginning. On Tuesday night 20 May 2008, the building that formerly housed Wilco's automotive parts, and that had been standing empty for over a year, was squatted. This is the selfsame building where Tesco plans to open a controversial Express store. More about that later.

The aim of the squat was to turn the building into a much needed social centre, a focal point for the local Romsey (and Cambridge) community. It should be pointed out that the social centre is not connected to the No Mill Road Tesco campaign. 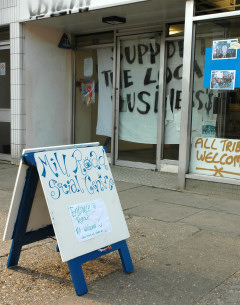 On the afternoon of Wednesday 21st May, a neighbour alerted police, who sent an armed response unit that demanded they search the building on suspicion of illegal drug use. After informing the police of their legal rights under Section 6, the cops threatened to take out the door with a battering ram. A compromise was reached so that two officers could search the building. After an hour long search, police left empty handed. The leader of the operation was clearly frustrated, taking exception to an Indymedia photographer taking pictures. claiming that this was an infringement of his civil liberties.

Over the next two days, the space was made fit for purpose. The floor was cleaned, the parking lot cleared, the walls were decorated, the glass frontage was made more attractive, paint was applied to the walls, and tables and chairs moved in. The large open room sprouted a cinema screen, a kids’ corner, a cafe area, and a workshop space.

On Friday 23th May, an Open Meeting saw more than fifty turn out to contribute ideas for the use of the new social centre. Among the plans are film screenings, dance lessons, an art space, various workshops and open mic night with acoustic music and poetry recitals. Anyone was invited to come up with new ideas for the space, as long as they adhere to the community spirit of the centre, and are free or only ask for voluntary donations from those who can afford them.

The next week saw the social centre swing into action, with something happening almost every night. A website was set up to announce news, upcoming events, and to document the use of the space. A Facebook group soon followed, which has attracted over 500 members. There is also a mailing list (millroadsocialcentre-announcements@lists.riseup.net). Via these various media, messages of support streamed in from all over the country, and indeed from right across the globe.

The Romsey Rollerbillies, a women’s rollerderby team, adopted the space as their new training venue, meaning that members no longer have to travel to Ely to practice their skills. They have been able to showcase the sport, attracting some new players.

Another regular occurrence were the Tango classes. In the gleam of red lights, strafed by lasers, the dancers take to the floor every weekend, to the atmospheric tunes of Tango classics.

The centre soon sported its own resident boxing maestro, who offers introductory lessons as well as fitness training to all interested.

There are also open mic nights, where anyone can climb onto the virtual stage and show off their talents, be it musical, lyrical, or otherwise.

The bare orange walls were covered by graffiti and paint artists, as well as those eager to pick up these skills during workshops.

With the donation of a projector, cult classics and activists films displayed their images on the walls.

But unfortunately, not all the news was positive. During the night following Strawberry Fair (7 June), local youth destroyed one of the large window panes, as well as the window of a van parked round the back of the building. The damage was barely repaired, when others struck the following weekend. Attacking the windows and the same van with a metal pole, they smashed five more windows, as well as a windscreen. Luckily, no one inside at the time was hurt in the attacks.

Earlier that week (on Thursday 12 June), the social centre was defending itself in court against Tesco, who sought, and after some legal wrangling, were awarded a possession order. The good news to come out of the hearing was the confirmation by Tesco’s lawyer that the supermarket giant were indeed unable to open the store without further planning permission (currently pending), and that they would not seek to impose the possession order until building could commence. This meant that the immediate future of the social centre at Mill Road looks secure.

Facing the destruction wrought by the vandals, the social centre decided not to be cowed by this setback, and over the next few days, the resulting mess was cleared up, and the windows repaired with painted boards. A busy schedule of events kept people coming to the centre, and is attracting ever more users of the space.

Not surprisingly, the social centre has attracted a lot of media attention. It was covered on local television news programmes, as well as in various local publications (just one of the Cambridge News articles; Local Secrets).