3rd August
Two University of California-Santa Cruz research scientists were targets of firebombs early Saturday, showing another sign of the escalating direct action and violence against university researchers who use animals in vivisection labs. 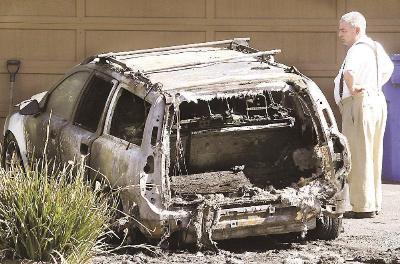 A passerby on Dickens Way takes in the wreckage of a car that was... 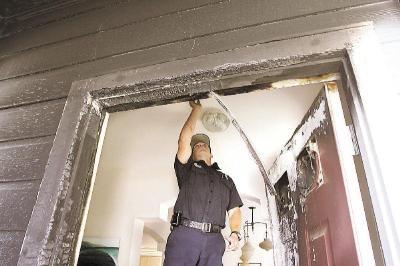 What sort of 'people' keep putting their families through this?
Vivisectors - just quit.

Experts from the Mercury News:

A car belonging to a researcher parked at a home on campus was firebombed, destroying the vehicle. In the off-campus incident, a well-known molecular biologist and his family, including two small children, were forced to escape a smoke-filled house using a second-story ladder after a firebomb was intentionally set off, police said. One family member sustained injuries requiring brief hospitalization, and police are calling the firebombing, which occurred shortly before 6 a.m., a case of attempted homicide.

Twelve hours later, firefighters were still trying to restore electricity to the house. The fire burned the front porch and melted the frame of the front door. Police said much of the home filled with smoke as a result of an incendiary device they would only describe as "significantly larger than a Molotov cocktail." A similar device was used to firebomb the car of a researcher. There were no injuries in that incident. Police refused to identify the owner of the car, but that person's name did not appear on the flier.

Santa Cruz police Capt. Steve Clark said Saturday's tandem events are the most serious in a string of events, including an attempted bombing of a Santa Cruz squad car in March 2007, that police believe are related to violent animal-liberation protesters.

In late February, six masked intruders broke into the home as the family celebrated a daughter's 8th birthday.

"The pattern and string of attacks has been escalating against the research and science community here as well as at other University of California campuses," Clark said.

Professors and researchers at the University of California-Berkeley and University of California-Los Angeles also have been targeted, including by firebombings in Los Angeles. More recently in Berkeley, nine hooded protesters showed up in front of a toxicology professor's off-campus home, scrawling "killer" in chalk on the doorstep and shattering the window of the home, and a window in a neighbor's home who scattered the protesters with a garden hose.

The Santa Cruz incidents occurred one day after a mass e-mailing by Stop Animal Exploitation Now!, or SAEN, highlighting what the group called "mounting violations of the animal welfare act" at private labs in Santa Cruz and Berkeley. Police would not say whether there is a connection between the group and Saturday's violence. Clark would only say authorities are looking at several animal liberation groups, including SAEN.

According to SAEN's executive director, Michael Budkie, who said he was in Ohio, the group researches and highlights public records regarding use of animals in research labs. He said the group does not use violent tactics and was not involved in the attacks Saturday in Santa Cruz.