On Saturday 6th September two hundred activists made it to Ledbury, Herefordshire, for the Carnival Against Vivisection in solidarity with political prisoner Sean Kirtley. The day of action was called by various groups in resistance to the imprisoning of peaceful campaigners under SOCPA legislation, and as a stand for the animals suffering inside vivisection laboratories.

Protesters met on the grass verge, where the police held them allowing a maximum of 15 at a time to demonstrate outside Sequani labs. Shortly after campaigners made a spontaneous break for the labs, with police responding by blocking the bridge to push back the crowd, creating minor scuffles. Multiple attempts were also made to access the labs using various pre-planned routes, meeting police each time, some of which had dogs. Protesters then regrouped at the grass verge to march the original route around town. 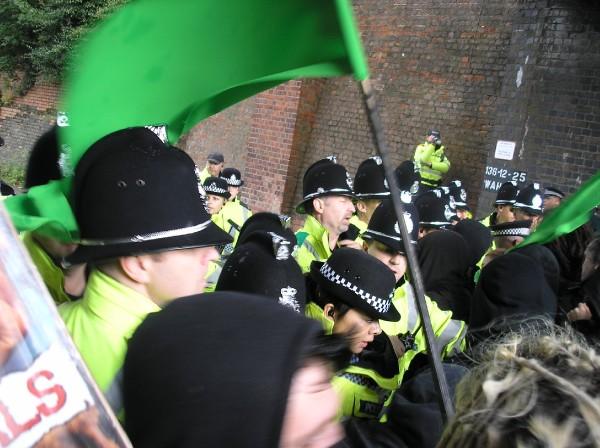 The following is text is from the Free Sean Kirtley website: http://www.supportsean.wordpress.com

Sean Kirtley was sentenced to four and a half years in prison after an 18 week trial which was at the time the longest running animal rights trial in history. He was found guilty of "conspiracy to interfere with contractual relationships so as to harm animal research organisation".

He was behind the SSAT (Stop Sequani Animal Testing) website and was seen by the police as the organiser of many the demonstrations against Sequani and suppliers of Sequani. He never himself actually broke the law during any protests, the police were present for most of the demonstrations he attended.

Video of the days events

Video of the days events - 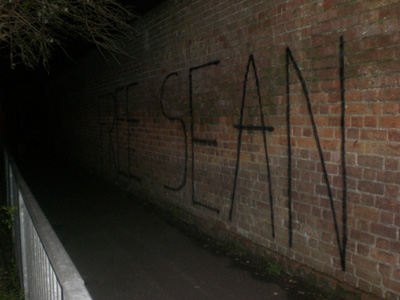 It is clear that many comments previously made on this story were intended to be inaccurate or misleading, were personal attacks intended to stoke the flames, and/or were disruptive by very likely being posted by 'the opposition' to cause disruption, splits and false paranoia in the Animal Liberation movement.

However the movement has the strength and cohesion to counter such attempts at disruption.

http://www.indymedia.org.uk/en/static/editorial.html, also out of concern for Sean's situation, and through feedback from Sean's established points of contact.

Some of the remaining comments refer to the hidden, disruptive comments, but are left to give some background to the reasoning behind the hiding process. The thread may therefore seem a bit disjointed.

Sorting out comments that were contrary to imc guidelines, from those that were valid but which have no relevance without the context of the others, has been a difficult process, which I have attempted as fairly as possible, following consultation with other reliable contacts.

I apologise to any that may find their own comments hidden for no apparent reason, but I trust that those with genuine concern for solidarity in the AR movement will accept this is a side effect of a difficult process, which I have attempted with the lightest touch and least disruption.

"Personal abuse will not be tolerated. This includes name-calling, bullying, personalisation of arguments, ad-hominem attacks and unsubstantiated accusations."

"Abusive or inflammatory language will not be tolerated. This list is not a place for flame wars, no matter who started it."

Finally, to quote a remaining comment: "Don't believe everything you read!! Simple! Speak to your friends in person and just be wary of all that is said over the internet" and comment removed as part of this process: "until all the facts are known we would ask that people stop discussing it on public websites like this"


Thank you and good night.