A mass protest against Brighton-based arms manufacturers EDO MBM/ITT took place on 15 October, 2008. Organised by the Smash EDO campaign, the event was called Shut ITT! and was the third such demonstration this year. Last June, Brighton saw the Carnival Against the Arms Trade, organised by Smash EDO too.

As the 400-strong march was prevented by police from reaching the EDO factory, 40 bottles of red paint were thrown over the back fence by a group of protesters who split off. The 'bomb factory' was reportedly shut down for the day. At least 10 people were arrested and some injured from police violence, including a photographer. 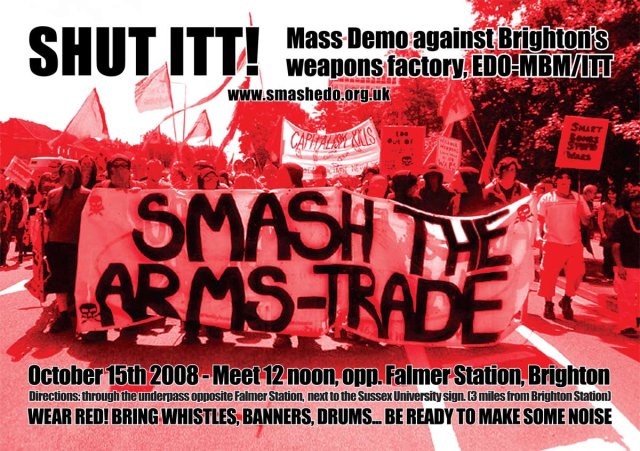 22:00: Houses in Leeds have been searched in connection with the demo. One of the arrestees has been released from custody.

16:10: 9 arrests have been confirmed so far. The 'criminal damage' to the EDO factory is said to have been 40 bottles of red paint thrown over the back fence.

16:00: A small group of protesters are 'kettled' by police on North Road, near the Earth and Stars pub. The rest of protesters have 'dispersed'. Earlier, around 15:00, a group tried to break through police lines at the other end of Home Farm Road but were unable to.

15:45: The march has split up. Police are using dogs at the Level to stop people leaving. A group of about 40 is being pursued by cops near St. Peter's church.

15:00: About 60 people are in a police 'kettle' on Lewes Road, moving slowly towards the city centre. There are unconfirmed rumours of some damage to the EDO factory after a group of protesters split off into the woods. Most of them have now left, though, and are near the Level (part of the Valley Gardens area) with a loud sound system.

13:45: The stand-off remains, with the march unable to proceed further up Lewes Road. About half of the protesters have split off and gone into the woods, followed by some 40 cops.

13:15: Some 8 police vans are blocking the Lewes Road in both directions. Police with batons are trying to force the march up Home Farm Road, but the march is refusing to go. Riot police are also out, hitting protesters over the banners and pepper-spraying the crowd. As reported earlier, a Section 14 is in place, stating that any static demo must be at the bottom of Home Farm Road.

12:50: The march, with about 400 people, is now on the A27 heading towards the EDO factory in Moulescoomb. Police have blocked both sides of the road. There are lots of whistles and noise. FIT Watchers are reportedly "very active".

12:30: The march has moved off early due to a number of violent arrests taking place. An estimated 250 protesters are heading down the path towards the A27 road, but people are still arriving.

12:20: More arrests. Police are seizing anyone with a mask on. Cops are now attempting to seize the reinforced banners.

11:50: There are some 15 cops on the Falmer Station side of the University underpass conducting stop-and-search. There are also some 25 cops and several police vans at the meeting-up point. A Section 60 is in place and scarves are being removed. There is also a Section 14 in place, which states that any static demo must be at the bottom of Home Farm Road. Police cars are placed at strategic points in the area, including the bus stop and the university entrance.

11:30: A Forward Intelligence Team (FIT) were seen outside Cowley Club. Minutes later, 8 cops arrived at Falmer station with a FIT team. Another another FIT team was seen outside Moulescoomb primary school on Lewis Road stopping vehicles, but have now left. There is still one police vehicle stationed halfway up the road into Stanner park.

10:30: A few police cars have been spotted near the Brighton railway station and St Peter's church in the Level (part of the Valley Gardens area). The EDO factory in Moulsecoomb is apparently open, but with skeleton staff.