After a succesful maiden voyage, the Free Gaza movement has launched it's second attempt at entering beleagured Gaza by boat. Today the Dignity set sail from Cyprus, bound for Gaza. This time the Israeli state has vowed to stop the boat if it enters Israeli waters. It did not enter Israeli waters on the last voyage, and it has no need to enter them this time. By stopping the boat in Gaza's territorial waters, the Israeli state will be confirming once again that they are still the occupiers of Gaza. 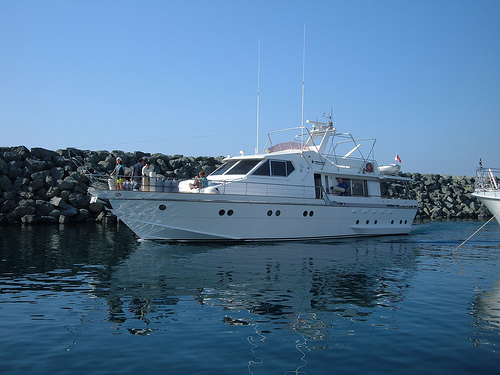 The Dignity sets sail from Limassol

A number of passengers remained in Gaza after the last voyage, and thus ISM Gaza was born. A major activity of the ISMers has been to accompaby fishermen as they face the Israeli Navy who have imposed a 6 mile limit on the fishermen, and who have frequently fired on boats, even when they are within the arbitrary limit set by Israel. Recent reports from ISMers indicate that a new tactic of the Navy is to use water cannon, which are reported to have fired toilet waste at fishing boats.

Among those travelling towards Gaza on the Dignity are Mustapha Barghouti, (MP and Minister of Information in the Palestinian National Unity Government), Israeli MK Jamal Zahalka (Balad), Nobel Peace Prize Laureate Mairead Corrigan-Maguire (co-founder of the Community of Peace People for a peaceful resolution of the Northern Ireland conflict) and a number of medical doctors. The boat is also carrying supplies, including cough mixture which is not available in the Gaza strip following the closure of Gaza's borders by Israel for well over a year.

Regular updates will be posted at www.freegaza.org

LARNACA - The Free Gaza Movement is delighted to announce that their third
boat, the SS Dignity carrying 27 crew and passengers arrived in Gaza at 8:10
Gaza time, in spite of Israeli threats to stop them. In the pouring rain, the
boat pulled into port amid cheers from the people of Gaza and tears from the
passengers.

David Schermerhorn, one of the crew members called an hour before the boat
entered the waters of Gaza and said, "There is a rainbow stretching across the
Mediterranean from where we are right now."

Yesterday, The Israel Navy said they would stop the stop our vessel once it
reached Israel's territorial waters. Apparently to save face, they said they
would harm our boat, arrest us and tow us IF we entered Israeli waters. The
problem for Israel is that the SS Dignity had no intention of getting anywhere
near those waters.

One of the organizers, Huwaida Arraf cheered, "Once again we've been able to
defy an unjust and illegal policy while the rest of the world is too
intimidated to do anything. Our small boat is a huge cry to the international
community to follow in our footsteps and open a lifeline to the people of
Gaza."

For the second time, the Free Gaza Movement has demonstrated that the might of
the Israeli navy is no match for a small boat of human rights activists
determined to call to the attention of the world the occupation of the people
of Gaza.

Dr. Mustafa Barghouti, member of the Palestinian Legislative Council added,
"Despite the injustice against the Palestinian people, we believe in justice
and will keep on trying to break Israel's siege. The occupation has divided the
Palestinians, but our nonviolent resistance has united us."

Osama Qashoo, one of the organizers of the Free Gaza Movement, overjoyed for
the second time in three months, "We are all capable of leading a nonviolent
and effective movement to end the Israeli Apartheid and expose the injustice
that has been meted out to the Palestinians. We in the FG movement have
provided the new dictionary, it's up to the Palestinians and the Israelis and
the Internationals to add the words."