It has come to light that Nottingham is host to one of the few companies in the UK that sell shark fin. Not only is the finning of sharks barbaric, but their indiscriminate slaughter at an unsustainable rate is pushing many species to the brink of extinction. Since the 1970s the populations of several species have been decimated by over 95%. Horn Of Africa Traders Ltd, based at Kelvedon Gardens, Carlton, Nottingham buy and supply sharkfin originated from North Eastern Somalia. The company is said to have a factory based in Somalia and able to supply up to 1000 ton of dried shark fin a month.

The marine conservation action group Bite Back and the Sea Shepherd Conservation Society have been working closely in the UK to get companies to ditch shark fin from their menus and shelves. As well as various restaurants in London's Chinatown, the health chain Holland & Barrett recently stopped selling shark cartilage capsules under pressure from the campaign. 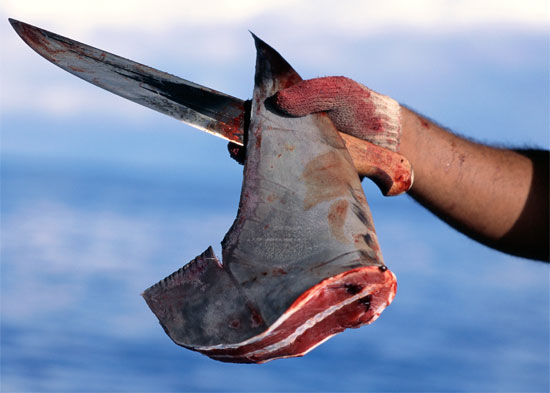 What is shark finning? (from stopsharkfinning.net)

Shark finning is the practice of slicing off the shark's fins while the shark is still alive and throwing the rest of its body back into the ocean where it can take days to die what must be an agonising death. Some sharks starve to death, others are slowly eaten by other fish, and some drown, because sharks need to keep moving to force water through their gills for oxygen. Shark fins are used as the principal ingredient of shark fin soup, an Asian "delicacy". Demand for shark fin soup has rocketed in recent years due to the increased prosperity of China and other countries in the Far East. Shark fin soup, which can easily cost $100 a bowl, is often served at wedding celebrations so that the hosts can impress their guests with their affluence. Because there is such a high demand for shark fins, traders can make a lot of money from shark fin, but it is the restaurant owners who really "make a killing" in this foul trade.

Fishermen are only interested in the fins because shark meat is of low economical value and takes up too much space in the hold. It also contains urea, which turns to ammonia once the shark has died and contaminates other fish.

Shark fin itself is tasteless, it just provides a gelatinous bulk for the soup which is flavoured with chicken or other stock. Many people, especially the consumers, are unaware of the sufferring that finning causes.

What effect has finning had on shark populations?

To put it bluntly, shark populations have been decimated. Globally. Tens of millions of sharks are slaughtered every year to satisfy the demand for shark fin soup; at least 8,000 tonnes of shark fins are shipped to restaurants around the world. Fishermen report that sharks are getting smaller because they are not being given time to mature. Shark populations take a long time to recover as they can take over seven years to reach maturity and they only raise one or two pups a year. Twenty species of sharks are listed as endangered by the World Conservation Union (IUCN). In a few years many species of shark could become extinct if action is not taken immediately. Populations of many shark species have fallen by over 90%. Since 1972 the number of blacktip sharks has fallen by 93%, tiger sharks by 97% and bull sharks, dusky sharks and smooth hammerheads by 99%.

What will happen to the oceans if sharks become extinct?

The consequences of the decline in shark populations on ocean life are immense. The large shark species are "apex" predators, they are ecological stablisers, once they are gone, all hell will break loose. For example along the US East Coast where large sharks such as black tip and tiger sharks have been virtually elimated, there have been declines in shellfish numbers and a reduction in water quality (shellfish filter sea water). Populations of small sharks, rays and skates have increased rapidly, consuming shellfish at an unsustainable rate. If you remove apex predators from an ecosystem the result is the same as removing the foundations from a building - total collapse.

Perhaps this backs up the information

Perhaps this backs up the information that:

Horn of Africa Traders first established in North Eastern Somalia and our current head quarter is in United Kingdom. Our company specializes manufacturing and exporting of various products such as dried shark fins salted and unsalted, Coptic frankincense (the king of frankincense) and Myrrh. All our products originated from North Eastern Somaia.
Our goals are high quality standard products with the right price. Also keeping close relationship with our customers.
As Horn of Africa traders we belief that our goals are meeting the needs of our customer providing high quality products and the best services are the key to our success.
We are currently expanding our company and establishing more offices around the world. For further information and detailed product information please visit our website or contact us for qoutation.
We look forward to doing business with you.

The business address is included on that link.