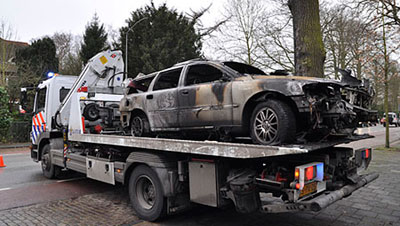 According to media in The Netherlands, in the late evening of December 19 in the city of Wassenaar two cars were destroyed by fire in the driveway of a NYSE Euronext senior executive. Animal rights activists are suspected of being responsible (NYSE Euronext is an exchange where shares are traded in the infamous animal lab Huntingdon Life Sciences).
Photo by Marco Hoppe/MHL media

"On December 18 we sabotaged 20 phones of the destroyer of the planet, the Telmex company, in the same manner as before (with bolt cutters and other tools).