Following an occupation on Tuesday in solidarity with Gaza, around 200 students gathered on the University of Birmingham's main campus for the Free Gaza demo, organised by a coalition of societies from the Guild of Students. There was also a small 'unauthorized' zionist 'peace' counter-demo separated by the presence of stewards, security, and police. 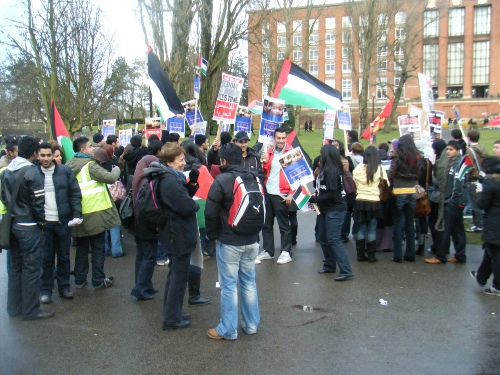 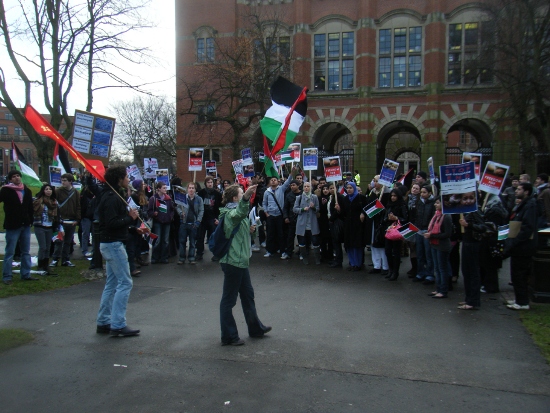 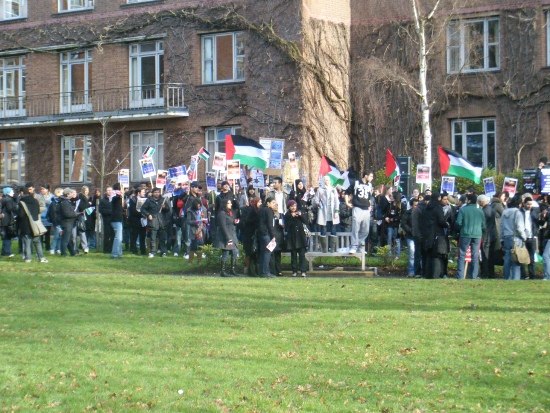 the crowd gathers for the main event 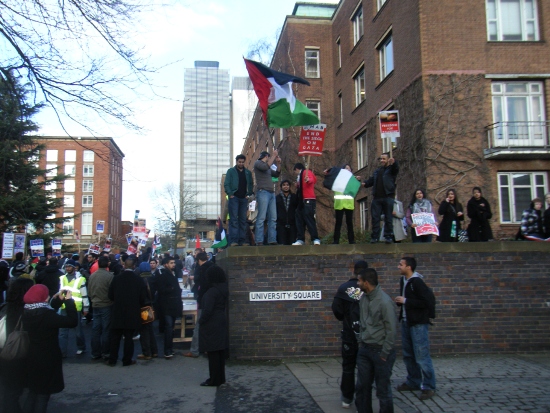 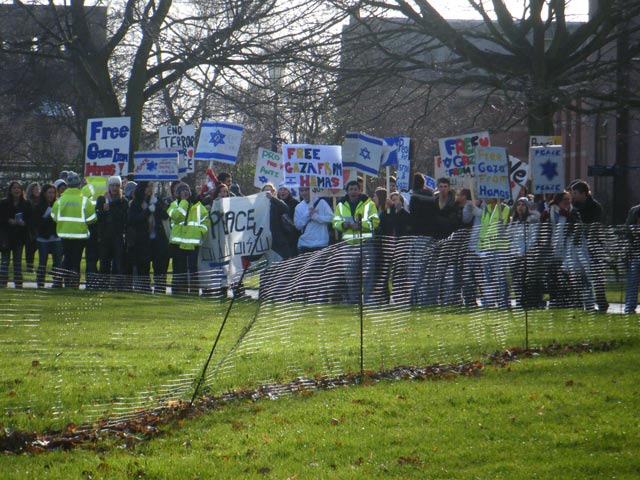 peace ... but only on our terms - the zionist counter-demo

The two demos started to gather from around noon, separated initially by the Law building and a scattering of police and security. Some socialist party cheerleaders got the crowd going with all the old favourites while the zionists, in breach of university regulations, congregated on the opposite side of the quad with placards such as 'end terror for peace' , 'peace for israel from gaza' , and ... 'peace' , which all sounded quite nice until you got to the apologist literature being pushed by the demonstrators on the periphery, which, in summary, attempted to justify Israel's 'proportionate' actions as its 'right to defend itself' against terrorist Hamas. The Free Gaza demo then moved to a stage which had been setup next to the arts building (sight of Tuesdays occupation) where they promptly began to blast the counter-demo with chants of 'free free palestine' and 'israel is a terror state' etc. It remained like this for the rest of the demo, with Free Gaza on one side of the square and the zionists on the other trying to out shout the PA system. Unfortunately, the atmosphere of 'peace' accompanying the zionist counter-demo was damaged somewhat by a group of zionist bully-boys crossing the magic line and trying to pick a fight with people on the Free Gaza demo. After this was diffused, mostly by the pro-palestine demonstrators, zionist stewards started making various spurious claims about incitement to racial hatred taking place in the heart of the Free Gaza demo, resulting in some tension and a lot of pressure being placed on the organisers to try and quell the anger and energy of the demo, finally resulting in the sound system being turned off. The crowd continued for a while beyond this point, and some calls to reoccupy were repeated before being quelled by speakers (much to the concern of the milieu of attending university bods, police, and security).

In what appeared to be a punitive response to the righteous energy of the Free Gaza demo, Guild of Students reps also decided that the demo would be an appropriate time to inform the Palestinian society that a host of motions it had submitted to the Guild council regarding the conflict in Gaza, which was to take place the same evening, had been withdrawn for fear of a commotion in the council chamber later on. They were unable to offer any justification for their action and had been reportedly discussing antiquarian statutes which they may need to use in case an unhappy group of pro-palestine students attempted to storm the council chambers.

All in all it was a fun day out for all concerned and precipitated a host of meetings about what to do next. Watch this space!