The Summer Of Rage Starts Here! - Call from London Anarchists 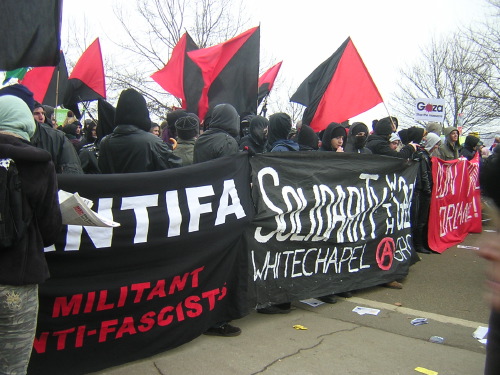 As the financial crisis has spurred a global economic recession the reality of the situation is being faced by us all – price hikes and wage cuts, job losses, spiralling debt and repossessions. The institutions of government and global finance are making us pay for their mistakes, giving themselves hefty bonuses for the privilege. As big banks get billions of our money to bail them out, the Post Office is threatened with privatisation and mass redundancies to claw back the pension hole! Government and bosses, while protecting their own interests, are steadily losing their grip as the anger of the working class becomes more and more apparent after a decade of enforced 'social peace'.

Putting working class anger first
The recent wildcat strikes at the Lindsay Oil Refinery saw workers take action for themselves, without union backing. Thousands of workers across the country walked out in sympathy strikes – a practice still outlawed under the Thatcherite anti-trade union laws. No repercussions were suffered by the workers - a lesson to us all.  And although we oppose such slogans as “British Jobs for British Workers”, we do not dismiss the experiences, anger and positive action of those workers to develop a pro-working class position, based not on capitalism's demands for inter-worker competition, but on international class solidarity.
If we want social change we must fight without prejudice for it.

Solidarity is not a word but a weapon
Our purpose is to put direct action at the core of any fightback - against the repossessions and redundancies that we will face over the coming months and years, to restate our commitment for an international unity amongst all working class people regardless of nationality, race, sexuality or religion. We stand shoulder to shoulder with all those who take direct action against their current situation (against the state and its institutions, against the bosses and the capitalism they cling to), and confront those who seek to hinder or recuperate that action - fascist parties like the BNP, government forces, the trade union elite and the corporate media. The memory of the miners strike, Wapping, Poll tax lingers long and hard.
2009 is our summer of rage - we are only as strong as the power we give ourselves.

Join the direct action bloc on the Put People First mass demonstration on Saturday March 28th. Meet in Victoria Embankment Gardens, 11am. Look for the red and black flags.

World leaders, including Barak Obama, are set to meet at Docklands Excel Centre in London's East End, for the G20 financial summit on April 2nd, to sort out the global crisis they themselves conspired to create. While unemployment escalates along with debt and poverty - we are told to tighten our belts, not to complain, to have faith in bankers, bosses and politicians, these leaders are preparing the biggest shake up in the history of capitalism since the 1930s. We can only imagine what is on offer as their solution - from the people that brought us wars in Afghanistan, Iraq and Palestine, from the heads of economies that continue to concentrate the world's wealth in the hands of a tiny minority from the obscene rich and powerful who continue to steal the products of our labour and time, forcing us to fight amongst ourselves for what's left.  We are living in uncertain, dangerous times, where we can either allow our futures, and the future of our children, to be decided by the same class of people that have brought us into this crisis (and continue to profit from our misery) or we can decide to get rid of the lot of them and organise society differently - for our own benefit and of the benefit of those around us; those we work with, those we live with, for a future based on our collective needs.

We are their crisis
Let's make this a chance for a fundamental change in society. Let's reclaim the history of working class struggle for a new free world, for a global human community fit for all, not the undeserving rich elite who are happy to see our lives ruined if it means that they stay in charge and at the top.  Join thousands of disgruntled, angry, pissed off people on the streets of the financial district. As the bankers continue to cream off billions of pounds of our money let's put the call out – RECLAIM THE MONEY, storm the banks and send them packing.
April 1st in the square mile, City of London financial district

APRIL 2/09 // G20 London Summit, Excel Centre, Docklands
A day of fucking up the summit and other adventures. Be warned. Be aware. Be ready!