For G20 feature coverage and reporting timeline of events see: 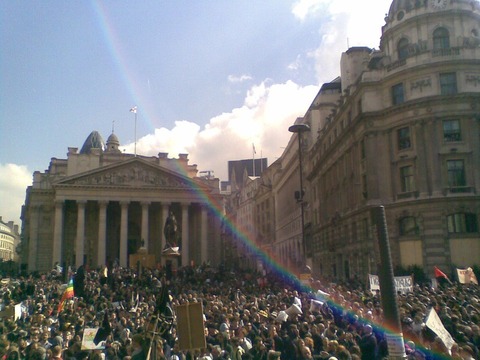 Help report what's happening by sending your reports from the streets. There are two Indymedia reporting numbers running 28th March - 2nd April: 07588 479 039 : For calling in reports from events - remember the 'who what when where why' - and also for sending txt msg updates and MMS picture messages.
08444 870 157: For calling in to leave a short audio recording that can be uploaded to the website. (If you do send pictures or audio messages, include the location and time) Twitter: If you are using twitter and have a report or update for Indymedia, include the hashtag #imcg20 in your message (read more in full article).

The Indymedia reporting numbers are for informing Indymedia about what is happening at the G20 events to enable an accurate picture of the events to be reported on the Indymedia website, they are not an information line to give out information.

The reporting numbers are public and may be monitored by the police.

If you are using Twitter, a record of your message will be published on your Twitter page (see below).

Think beforehand about the report you are going to call in or message, and try to be as accurate as possible.

If you are taking pictures or video, respect other people's desire not to be filmed. Pictures and video can often help people prove their innocence when arrested, however they can also incriminate people, so think about what you shoot and be aware the police sometimes try to confiscate recording equipment, media and film.

Twitter is a short messaging system allowing people to post sms sized (140 characters) updates about what they are doing. It's a very powerful tool for citizen journalism, since people can send updates (or 'twitters') from their mobile phones to the web.

Many of the groups involved in G20 protests are also using twitter to spread their message:

On Saturday the Put People First organisers are asking participants to send Twitter updates about the march, by including the hashtag phrase "#G20rally" in their messages, so those messages can be diplayed all together.

Indymedia has been using Twitter for a while, and is now asking people to include the hashtag #imcg20 in their twitters during the G20 week if they have news updates. This is decentralised DIY media.

To see how it works, check out the Put People First guide here: http://www.putpeoplefirst.org.uk/2009/03/mobile-mavericks-wanted-to-twitter-from-the-rally/

Again, it should be stressed that using Twitter creates a record of your messages in the same way that many social networking tools do.