A Conspiracy too far?

In one of the best reports on the incident so far, Daithai asks some pertinent questions about the police raid involving more than 200 officers from Nottinghamshire, Derbyshire, Leicestershire, Staffordshire and British Transport Police which saw 114 people arrested for conspiracy at the Iona School in Sneinton Nottingham shortly after midnight on Monday.

After recent Police actions in the UK many are asking where is the right to protest? Indeed taking in conjunction with the increase of the Surveillance State and the creeping increase in arbitrary administrative justice with spot fines and penalties many are concerned at the erosion of civil liberties in a land which claims to be the home of democracy. Lawful protest has become more difficult in the UK with an exclusion zone around Parliament, state sponsored snooping, stopping and detaining protestors on the way to demonstrations and aggressive and deliberately violent “policing” of demonstrations including the tactic of “kettling” or penning up demonstrators for hours on end. Increasingly the Police in the UK are not forming the “independent mind” required of them when they take their Oath of Office but instead of upholding the law they are increasingly setting themselves above the law and becoming attack dogs for vested interests. So where does this leave the Policing consensus for these very expensive and increasingly unaccountable taxpayer funded “Public Servant’s”, sworn and empowered to uphold the “Queen’s Peace?”

Take for instance the recent attempt to widen the Law of Conspiracy. In Nottingham, England 114 possible demonstrators have been arrested, but not charged in connection with a suspected plan to protest at a power station. Where would this tactic have left the woman’s suffragettes, civil rights campaigners or the Ramblers who trespassed on Kinder Scout to establish the right to roam in Britain's countryside? Are these Stasi tactics of anticipating a crime which may or may not be committed a sign Britain is on the slippery slope to a Police State?

Police have defended their decision to arrest 114 environmental campaigners in connection with a suspected plan to protest at a power station. The men and women were held in Sneinton Dale, Nottingham, on Monday and later released on Police bail. Police said they had been planning to cause "prolonged disruption" at Ratcliffe-On-Soar power station. Meanwhile, the BBC has reported that the station's owner E.ON had already warned its staff about possible protests. No-one has been charged in relation to the case.

In a letter sent to around 17,000 staff employed nationally by E.ON last month, the company's chief executive said protesters had already tried to shut down power stations and get access to the firm's offices over controversial plans for the company's new Kingsnorth coal-powered station. Staff were also sent a leaflet offering personal safety advice and telling them how to handle possible encounters with protesters. This begs the interesting question did the Police form an “Independent Mind” based on their own evidence or did they proceed on the basis of representations from a German owned commercial power generator?

The local Nottinghamshire MP has criticised police for using "SAS-style" tactics during an operation to arrest more than 100 environmental activists before they had even begun protesting. Eco-campaigners and civil liberty groups have questioned the circumstances surrounding the mass arrests, thought to be the largest single pre-emptive raid on a group of demonstrators in British history. Police used more than 200 officers from five forces to arrest 114 men and women in Sneinton, Nottinghamshire, early on Monday morning because they were allegedly preparing to cause "prolonged disruption" to the nearby Ratcliffe-on-Soar coal-fired power station. Those arrested were found inside the privately owned Iona school, which was closed for the Easter break, and were charged with conspiracy to commit aggravated trespass and criminal damage.

Nottinghamshire Police have defended the raid, saying they believed the protesters intended to engage in an unlawful demonstration that risked shutting down the power plant. Officers found bolt-cutters and locking equipment and suspect that the activists were planning to chain themselves to vital equipment inside the power plant. All those arrested were released on bail yesterday pending further inquiries. Alan Simpson, the Labour MP for Nottingham South, has questioned the nature of the pre-emptive strike, saying it had serious repercussions for the right to free assembly and had utilised overly heavy-handed tactics. "I am absolutely baffled by the sheer scale of the police operation," he said. "It was very Orwellian. What we saw was over-the-top, smash-and-grab, SAS-style; pre-emptive policing that was massively disproportionate to what was happening on the ground. The scale of policing was what you would expect to be used for a terrorist event or the break-up of a major crime syndicate, not to stop an environmental protest." 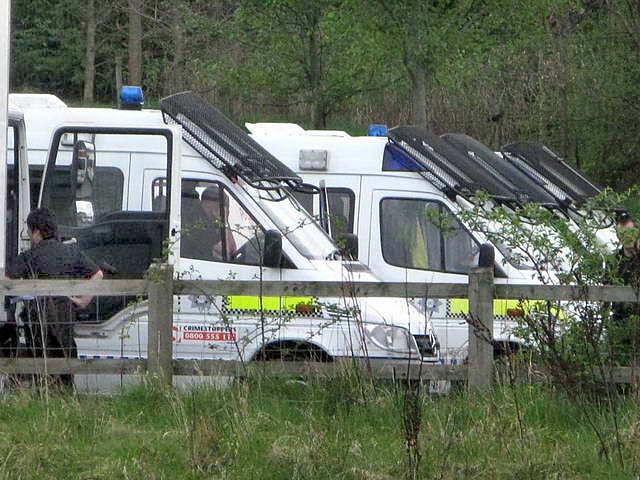 Mr Simpson also questioned why it was necessary to smash two double-glazed doors at the Iona school, which has now had to put in new doors and flooring. The school's owners said they had no idea protesters were meeting there. No environmental group has yet claimed responsibility for the planned protest. It is believed groups associated with the Climate Camp network were involved.

More than 200 officers from Nottinghamshire, Derbyshire, Leicestershire, Staffordshire and British Transport Police took part in the raid at the Iona School in Sneinton shortly after midnight on Monday. Supt Mike Manley of Nottinghamshire Police said large amounts of equipment had been found, including food and various devices used for climbing, cutting and locking on to machinery. He said: "We think it was a sophisticated attempt to disrupt what we now believe was Radcliffe-on-Soar Power Station. Our information was that it wasn't to be a lawful protest. This was to be a criminal act against a power station. Had that taken place, we would have now been policing a major protest at a major power station."

There were no reported injuries and local residents said handcuffed suspects sang loudly as they were led away. No-one has been charged with any offence. On Tuesday the nursery at Iona School was closed while workmen repaired doors damaged in the raid. The school said it was distressed at the disruption and damage caused, and the group had had no permission or authority to meet there. Officers also said that some of those arrested had links to climate change groups which had protested at Kingsnorth power station in Kent, Heathrow Airport and Drax power station in north Yorkshire. However, police would not name any organisations.

The coal powered power plant which uses old technology and is highly polluting, which is eight miles south-west of Nottingham, has seen protests by environmental campaigners in the past, including members of Eastside Climate Action. Bob Andrews, from the group, denied any connection with the latest incident. However, he said direct action was the only way to bring about a change in energy policy. He said: "We're saying we've got to change policy, and (the government and E.ON) are not doing it. They're not taking the science seriously. It's got to change. Stop burning fossil fuel."

The polluting power of an old technology coal power station.

David Porter, chief executive of the Association of Electricity Producers, said campaigners' calls to stop burning fossil fuels made no sense. "If you suddenly close down our power stations that would be a suicidal policy. The economy of the UK would be seriously disrupted. And there would be social implications of that. It's a nonsensical approach to the problem."

Police tactics when dealing with protests have been placed under heavy scrutiny in the past two weeks following the death of Ian Tomlinson during the G20 protests in London. Mr Tomlinson died of a heart attack shortly after apparently being hit and pushed to the ground by a baton-wielding riot officer. The Independent Police Complaints Commission is investigating.

Protest and free speech are crucial parts of political life, with a strong British history, yet a variety of measures undermine them. Laws intended to combat anti-social behaviour; terrorism and serious crime are routinely used against legitimate protesters. Free Speech has been a victim on the 'War on Terror', with offences of 'encouragement' and 'glorification' of terrorism threatening to make careless talk a crime.

What is more surprising is that the Police have previously been found both to be lying in information they released about a similar demonstration at a power plant also owned by E.On in Kent in August and prosecution against demonstrators who had actually entered the plant and scaled the chimneys were thrown out by English Courts. Police minister Vernon Coaker had to apologise for telling Parliament that 70 officers were injured dealing with protests at Kingsnorth power station. His comments came after it was revealed that injuries sustained during policing at the Climate Camp in August included insect stings and heat exhaustion. There were only 12 reportable injuries, according to a Freedom of Information (FoI) request by the Liberal Democrats. More than 1,000 officers were involved in policing the event near Hoo in Kent, a ratio of 2:1 of the 500 demonstrators involved.

According to information obtained by the Liberal Democrat political party, Kent Police officers and staff suffered only 12 reportable injuries, four of which involved direct contact with another person. The minister’s apology came after it was revealed that injuries sustained during policing at the Climate Camp in August included insect stings and heat exhaustion. There were only 12 reportable injuries, according to a Freedom of Information (FoI) request by the Liberal Democrats. More than 1,000 officers were involved in policing the event near Hoo in Kent. The Lib Dems said the eight other injuries included being "stung on finger by possible wasp", "officer injured sitting in car" and "officer succumbed to sun and heat". Kent Police confirmed that 12 officers were required to retire from duty because of their injuries.

Six Greenpeace activists who were charged were then cleared of causing criminal damage during the protest over coal-fired power which breaches Britain’s treaty undertakings on carbon emissions. The activists were charged with causing £30,000 of damage after they scaled Kingsnorth power station in Hoo, Kent. At Maidstone Crown Court Judge David Caddick said the jury had to examine whether protesters had a lawful excuse. The defendants said the protest was lawful because it aimed to prevent damaging emissions. Energy firm E.ON said lives had been put at risk.

So the important question to be answered by the forces of Law and Order and the Crown Prosecution Service is how did they feel entitled to arrest 114 people on suspicion of “Conspiracy to engage in Aggravated Trespass and to Cause Criminal Damage” when in entirely identical circumstances substantive charges have been thrown out by the Courts? The other important question is how, if any of these 114 people who were deprived of their liberty, are actually charged with an offence they can receive a fair trial given the amount of prejudicial comment presented as fact to the media by the Police? Those of us who care about Civil Liberties will be interested in the answers to these questions, if we ever hear them?

Pictures taken by ALAN LODGE
Photographer - Media: One Eye on the Road. Nottingham. UK
Email: tash@indymedia.org
Member of the National Union of Journalists [No: 014345]

This is a rewrite of an original posting for promotion to our features column. You may wish to also check out the comment and discussion at: