The trial of the eleven climate change activists who disrupted operations at Ratcliffe-on-Soar power station on April 10th 2007 has started today at Nottingham Bridewell Magistrates Court. They have pleaded not guilty to charges of aggravated trespass and arguing that it was necessary to take such action in order to prevent the imminent threat that climate change poses to the human population. They are arguing that the threat of climate change on human life is so imminent & serious that it is a proportionate and reasonable response to commit aggravated trespass to try to reduce carbon emissions from England's 2nd largest CO2 emmiter, Ratcliffe on Soar power station.

This is the first time that the defence of necessity in relation to climate change has been used in a court of law. The defendants will call an expert witness; a climate scientist, and Royal Society Research Fellow, to prove to the court the scale and imminence of the threat that climate change poses. 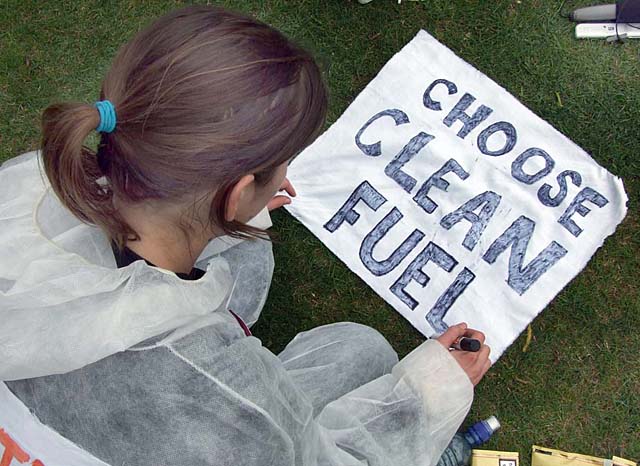 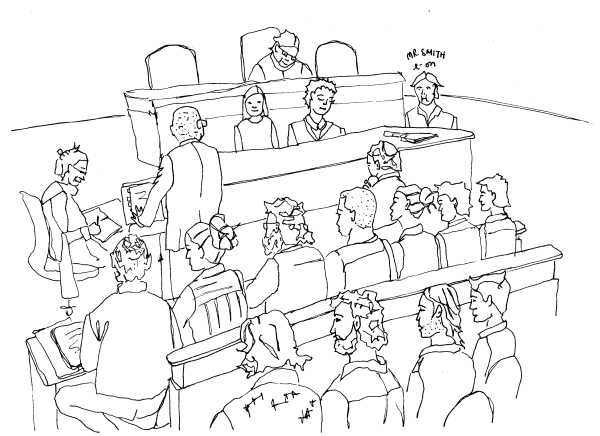 Day 1: Artist impression from inside court by Elsa 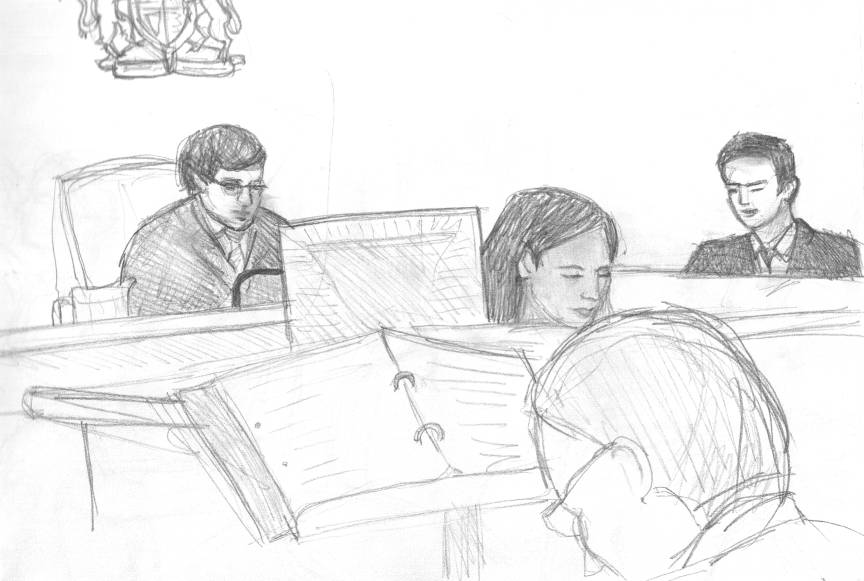 On 10th April 11 activists walked into Ratcliffe on Soar Power Station. Production at the plant was halted when they locked themselves to the conveyer belts, stopping the supply of coal to the plant for over 3 hours. The accused all protest their innocence to the charges of aggrevated tresspass. One of the activists said; "I believe this action was a reasonable and proportionate response to the threat of catastrophic climate change and that this action was to prevent a greater crime occuring."

According to one contributor, the action did not only seriously affect production at Ratcliffe but put pressure on the whole grid; "To an extent production could have increased elsewhere to cover the shortage but not immediately to great affect. This was about stopping coal from being burnt but also electricity from being produced in this way altogether. The activists came very close to shutting Rattcliffe down for 48 hours; EON nearly had to fire the whole furnace back up. If this shortage had persisted, the grid would have been vulnerable to further such actions. It is estimated that the action at Rattcliffe stopped the burning of 5,000 tonnes of coal, eqivalent to preventing 9,000 tonnes of CO2 being emitted. A low impact lifestyle could release as little as 1 tonne of CO2 per year. Meaning that each of the activists could have offset their emissions for up to the next 1,000 years!"

The action at Ratcliffe took place as part of a wider week of activities around the issue of climate change in Nottingham called 'Spring Into Action'. It showcased practical solutions to climate change. From workshops on bike maintenance, local food production, community compost projects and strawbale building to concerts and performances, it was an action packed week. It also acted as a showcase for existing projects in Nottingham including Country Parks, allotment projects and the Attenborough Nature Reserve. A lot of the events took place at a for-the-occasion occupied former lace factory, also known as the J.B. Spray factory in the area of Radford. 'Spring into Action' was organised by Eastside Climate Action, a group made up of local people and groups inspired by the Camp for Climate Action. The week was all about inspiring, educating and empowering people to start making changes in their own lives and demonstrating practical alternatives, local projects and local campaigns in action. "It is about changing our lifestyles, but also inspiring collective action to create the wider social change that is needed to deal with climate change. Climate change is the greatest threat humanity has ever faced, and we are already feeling its effects. Change is coming whether we like it or not. We need to make these changes sustainable and equitable." according to one of the organisers. Read this feature article for reports from Spring Into Action.

I was there! despite ridiculous parental, grand-parental, police, and court "security" disapproval. After the gripping tale of sacrifice for the greater good in the face of national grid PR, the balding Crown prosecutor was thanked for ending the case early, 15.20pm. The attendees sometimes could not stop laughing at the E.ON witnesses, sorry. I can't remember the joke? The managers are so into coal market conditions it's not funny! The district judge has asked the defendants to carefully and slowly explain jargon such as "carbon-neutral", before we launched into a technical description of how the group made a massive CO2-saving consistent with the above. See you at 9.45 for the pinnacle of science and a rumored press-conference.

Where do we stand (literally)?

The police were in fine form on monday morning, insisting that we maintained a good distance from the courthouse, and that we (rather inexplicably) stayed back behind a few steps, presumably because they might catch our germs or had some sort of allergy to banners. Most notably officer 761, who can be heard in the few extracts here, explaining that 'there is a law, I just cant name it specifically', odd behaviour, given the location of other protests that have been held there.
They also tried the classic 'you cant record here' trick (as you may be able to distinguish). Apologies for shortness of length and poor sound quality, it was made in some rush and is the recording ive made in a while....


i was there as an attendee and among others around me were occasionally laughing at some of the responses from the prosecution witnesses- especially mr smith, power station manager.

the laughter was of a incredulous, grim, nature, due to the quite astounding answers to some of the questions put to them by the defence. for instance, mr smith consistently saying that he didn't know any of the exact figures of energy output at the time of the defendants' action or subsequent CO2 emissions as he didn't have the data with him. asked why he hadn't provided the figures as the defence had requested he said: 'i didn't have time'. he also said that he didn't have data concerning the amount of fuel used for the warming up of the ironbridge plant but then proceeded to make statements about what he thought was the monetary value of the oil used- which surely could only have been conjecture (?)

overall, what was so baffling, was that none of the witnesses seemed to have any accurate knowledge of the state of the output of the power station during the 5 hours or so that the defendants were there. and given his job, you'd have thought that mr. smith would know a little bit more about the emissions of his station- especially as e-on claim to be so concerned about climate change.

Dr Simon Lewis asks if it's time for more research to be done on "a body count". Given that the climate kills case hinged on one WHO study from 2003. More research or repeal the law, both would help direct action fall within the international "framework".

For the verdict of the case, please see this feature article: