Edited audio from George Galloways friday and saturday radio show in which he makes it quite clear that he disagrees with the official conspiracy theory surrounding the events of 9/11 and asks people to investigate further. 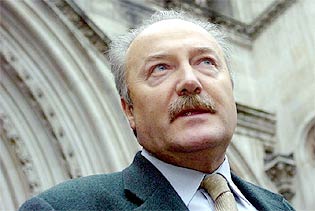 George Galloway MP had a New Yorker called Tom Kiley on his Talksport radio show friday and saturday night talking about 9/11 and with particular focus on the destruction of the Twin Towers and World Trade Centre Building 7. George Galloway opens the first show

http://www.wearechange.org.uk/galloway17april.mp3 explaining that he still holds Islamic extremists responsible but a recent chance meeting with Tom in New York has planted seeds of doubt in his mind. Soon into the second show

http://www.wearechange.org.uk/galloway18april.mp3 George Galloway admits "it's hard to see scientifically why both of the Towers fell down in the way that they did and it's practically impossible for me to see how Building 7 could have fallen down in the way it did"

Some of the professional organisations mentioned include:

Little over a week ago 9 members of Scholars for 9/11 Truth & Justice had a peer-reviewed paper 'Active Thermitic Material Discovered in Dust from the 9/11 World Trade Center Catastrophe' published in The Open Chemical Physics Journal. According to one of the scientists involved Professor Steven E Jones "in short, the paper explodes the official story that 'no evidence' exists for explosive/pyrotechnic materials in the WTC buildings." It can be read at

In 2008, several of these authors published three articles challenging the official reports in US scientific journals, The Open Civil Engineering Journal

http://ascelibrary.aip.org/dbt/dbt.jsp?KEY=JENMDT&Volume=134&Issue=10#DISCUSSIONS%20AND%20CLOSURES. Dozens of other papers making similar challenges have been published in the sister publication of the Scholars group, The Journal of 9/11 Studies

DISCLAIMER: We Are Change London do not endorse all of Tom Kiley's positions.