Smash EDO's Mayday! Mayday! Street Party on 4th May looks set to be the next stop on the summer of rage. The mobilisation has been linked firmly to a new wave of resistance against global capital. A map has been published showing the location of EDO's key investors and business partners in Brighton. The list includes highstreet banks, BP, American Express and Mcdonalds. The message is clear, EDO cannot operate in a vacuum; it is propped up by the state and a network of global corporations.

Despite all this the police seem to be firmly on the back foot after the media backlash, triggered, by the killing of Ian Tomlinson, against police violence and repression at the G20. Sussex Police have been told to 'behave' by Chief Constable Richards who fears that “People’s confidence in policing has been shaken by things they have seen on their TVs and read in their newspapers". All this must be rather difficult for Sussex police as they have been gearing up for some serious repression of Smash EDO for quite sometime. Dick Barton, a Sussex Police officer seconded to the Home Office who was responsible for training Iraqi police recruits in Basra and Baghdad, has been given the dubious honour of coordinating investigations of 'crimes against EDO'. Past police tactics have included following 'organisers', supporting a dodgy injunction, engaging in ridiculous conspiracy cases, attempting to cultivate informers and attacking mass demonstrations 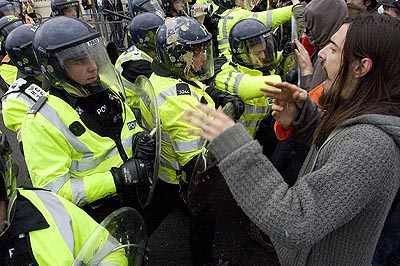 ...and debate with the thick blue line.

Sussex police, desperate for information, have written to people they perceive to be organisers, saying that the policing of the demonstrations will not be repressive if organisers negotiate with the police. Smash EDO responded, in an open letter, giving the example of the Camp for Climate Action who engaged in dialogue (see here) with the Met before their G20 protest but were still subjected to brutal attacks. The police have told the Argus that they plan to target suspected 'ringleaders'. The Gold commander for Mayday! policing has taken to posting appeals for information on Indymedia.