when is a flag a terrorist flag? the answer, it seems, depends on who and where you are! to a tamil student in parliament square, it is, and they're arrested (and fined?!). but if you stand outside new scotland yard and challenge the police to arrest you and test it in court, suddenly it magically becomes the tamil eelam national flag and is NOT proscribed. murky goings-on at parliament square. 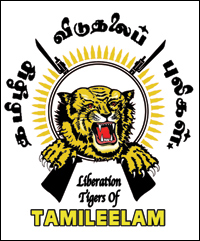 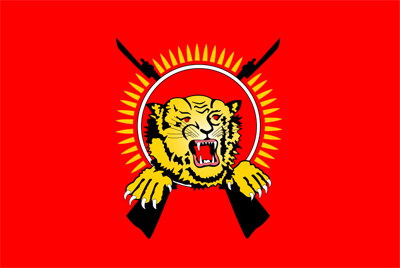 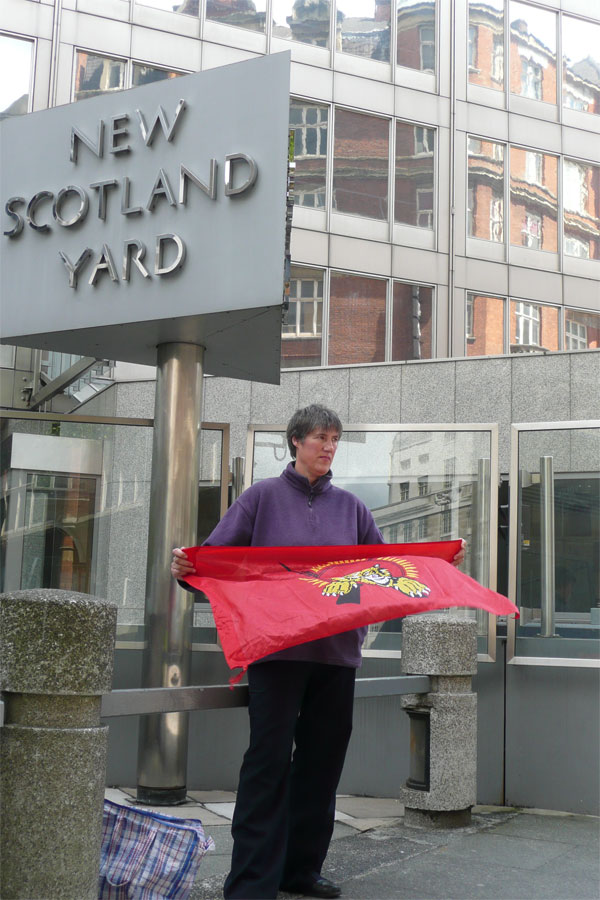 police, rather than test the truth in court, have taken to their usual method of unlawful seizure and intimidation in the battle against tamil flag waving in parliament square

for the past few days, police have been intimidating and threatening protestors in parliament square for waving the tamil eelam (homeland) national flag.

last week, a superintendent was quoted as saying that anyone waving the flag would be photographed and arrested as they leave the square. they would then be "banned forever".

after researching the law around the flag, maria (peacestrike.org.uk) and other tamil protestors, are convinced that that the tamil eelam flag can not be illegal.

the LTTE tamil liberation fighters are a 'proscribed' group under terrorist law, and displaying their flag can be interpreted as supporting a terrorist organisation in our orwellian legal system. (don't forget that nelson mandela was once labelled a terrorist by british authorities and now his statue watches over the current dispute from the corner of the square). however, the tamil eelam flag, while using part of the LTTE artwork, does not include the name of the organisation, and has a distinctive red background. it is the flag of a race of people and a homeland, and is not a symbol of the military struggle. it is not a flag of the LTTE.

so last week, maria (from peacestrike.org.uk) waved the tamil flag at the front of the square, and was warned she may be arrested. she was happy to give her details, and asked what would happen next. she was told "you might get a summons". she gave her phone number, just in case.

what actually happened was that the police seized the eelam flag from her, but did not arrest her (or indeed ban her forever from the square). she asked on what basis the seizure was made, and was told it was under terrorism laws. she asked for a receipt or some other paperwork as record of the seizure. her requests were refused.

it seems clear that police have been told to clamp down on the tamil protest, but that they also know that their flag ban would not hold up in court. so they just seize, with no lawful excuse. this is similar to the many times that campaigner barbara tucker has had her megaphone ripped away from her, damaged or stolen, and yet has never been successfully prosecuted for unauthorised use.

so yesterday, maria took her campaign directly to the police. she stood outside new scotland yard and unfurled the tamil eelam flag. one officer moved her on and told her to keep moving so as not to cause an obstruction. another plain clothes officer said it was a tamil tiger flag. two more armed protection officers questioned her and sought advice on their radios. first they said it WAS a proscribed flag, and so would take further advice about how to proceed. but then a few minutes later, they reported that the counter terrorism command unit (SO15) had looked at the flag and told them it was NOT a proscribed flag and so maria was free to continue or leave.

later the same afternoon, police at parliament square were still threatening to arrest tamils displaying the flag. maria has tried to get them to check with SO15 (the counter terrorism command who ruled on the issue) but promises have been broken and phone calls not returned.

this morning, police in the square are still not co-operating, saying they have been unable to 'clarify' the situation. maria meanwhile will attend belgravia police station later today to report the theft of one of her flags by police officers in parliament square. video now posted (see below) - judge for yourself how clear the situation is

the official mainstream view of the conflict in sri lanka is that the tamil terrorists have been defeated, the problem is over, and the sooner we forget about it the better. this is a huge international lie.

the tamils know that genocide has occured, that more than a quarter of a million civilians are currently held in facilities that are little different from concentration camps, that women and children are still being slaughtered, that tens of thousands with serious injuries are still dying for lack of medical facilities, and that independent scrutiny, aid, medical supplies, and media are all effectively barred from the area.

the determined and peaceful protest outside parliament is a constant reminder of the big international lie, and the clampdown on flag-waving is just part of a concerted policy of repression, along with recent beatings of women and children while clearing peaceful road occupations. 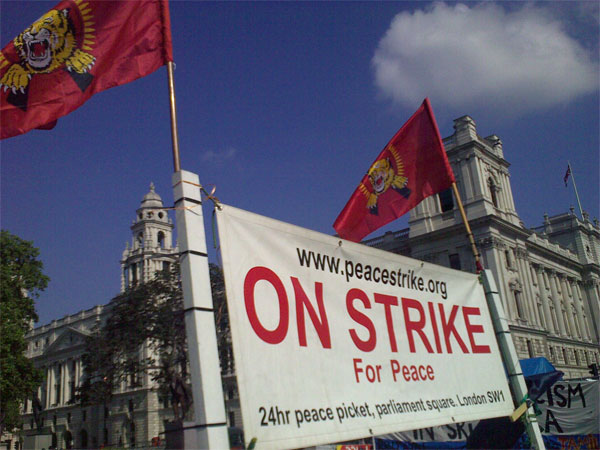 the flag flew all night, and maria was visited this morning at 8am by inspector adamson. ms adamson had a piece of paper from SO15 showing an image of the red flag and stating that it WAS proscribed. she asked maria if it could come down. maria explained the situation that she wanted a court to decide if necessary, and so refused.

maria also took a photo of herself with the flag and emailed it to belgravia police station, so the police had evidence of the crime and would have no need in law to seize it as physical evidence. the inspector went away and made more calls.

at 8.45, inspector adamson returned and said that she had spoken again to SO15 and that they had now relinquished and agreed once more that it was NOT a proscribed flag. she also promised to let the next shift commander at parliament square know that this was now the official position, and she promised to try and get the new decree in writing from SO15.