Rossport resistance intensifies ahead of arrival of Solitaire

On the evening of Monday the 1st June, dredgers and accompanying boats returned to Broadhaven Bay to begin work on the off-shore pipeline for Shell's Corrib Gas project in County Mayo, Ireland. The pipe laying ship, the Solitaire, is expected to arrive within the next few weeks.

The boats have met stiff resistance from people at the newly formed Rossport Solidarity Camp. There have been attempts to dismantle the causeway at the Shell compound and numerous water based actions against dredging work . On Tuesday night the crane on one of the dredgers was occupied for over 10 hours, halting work for this period.

The camp is currently well occupied and the area seems set for another summer of action... Last year, the pipe laying ship, the Solitaire, was forced out of Irish waters with no pipeline laid. The time frame for pipeline work is limited; if resistance can be sustained for enough time pipeline work can be halted again. The camp is calling for people to go to Mayo to support the struggle against Shell. 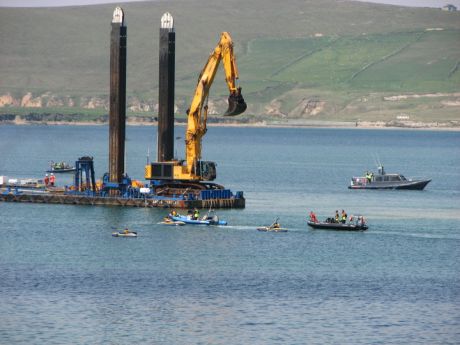 Construction of the off-shore pipe is the latest stage in the Corrib gas project. The development has been resisted by local people since 2000 on health, safety and environmental grounds (see www.corribsos.com). Last summer resistance was highly successful and people traveled from across Europe to help the local community in their struggle. Following a successful summer gathering over the bank holiday weekend, attended by around 200 people, the Rossport Solidarity Camp is once again a hive of activity and actions against work are ongoing.

Over the past month, the local community have made a concerted effort to stop work. Shell's construction of a compound at Glengad (the beach where the off-shore pipe is planned to come on land) was resisted from the beginning. Trucks attempting to bring materials to construct the compound were blockaded and occupied and initially the fencing was removed by the community. Shell's response to the resistance was a vicious night time attack on Willie Corduff of the Rossport 5, by Shell security IRMS, while he was blockading a truck .The compound was eventually constructed, but resistance continued. There were several attempts to dismantle the compound by pulling down the fences but the focus of resistance has now moved to the water based work. The ongoing actions have forced Shell to rely on a permanent presence of security and Gardai (police) boats while they are working. So far, neither the security nor the Gardai have been able to prevent activists stopping work.

Ongoing action over the next month is essential if the pipeline laying is to be stopped for the year. The more people and skills present at the camp the more can be accomplished. There are important tasks, on land and sea, for everyone to be involved in whatever your levels of experience. Anyone who is able to travel to Erris should do so as soon as possible and will be made very welcome by the local community and the Rossport Solidarity Camp. Visitors should take tents sleeping bags and water proofs, communal meals are cooked and compost toilets are set up for sustainable living. Go and see this beautiful place.

25 June 2009 The Solitaire arrives in Broadhaven in a second attempt to lay a pipe line through this special area of conservation to their landfall site at Glengad beach, which was built without planning permission,against the wishes of the local community. Shell have removed gear of local fishermen without lawful authority .As the Shell to Sea Kayaks attempt to reach the Solitaire Pat O`Donnell boat is boarded where he is assaulted by police and removed from his boat by lifeguard to Hospital.Another fisher man Martin O`Donnell is threatened with arrest while trying to work . The Shell to Sea flotilla manage to by pass massive security operation mounted by Shell, Irish Police ,Garda,and the Irish Navy to come within 100 meters or so of Solitaire forcing her to move away.