The summer of 2009 is seeing an upsurge in campaigning on climate change, with Climate Camp protests taking place throughout Europe and the world [see list] ahead of the COP15 UN Climate talks in Copenhagen in December this year. Climate Camps have recently taken place in Scotland, Wales and Ireland with hundreds of people occupying land, learning about climate change, exchanging skills and taking direct action, as well as supporting local residents already engaged in resisting fossil fuel schemes that damage their health and the environment. Camps have also taken place in France [see imc.nantes] and near Antwerp by the Belgian/Dutch border  [see imc.nl|imc.be]. Next up is the UK Camp for Climate Action in London on 26th August, ahead of an autumn of mass action [2] before COP15 [1|2]. Climate Radio Climate Camp 2009 Special. For more details see the Full Article. 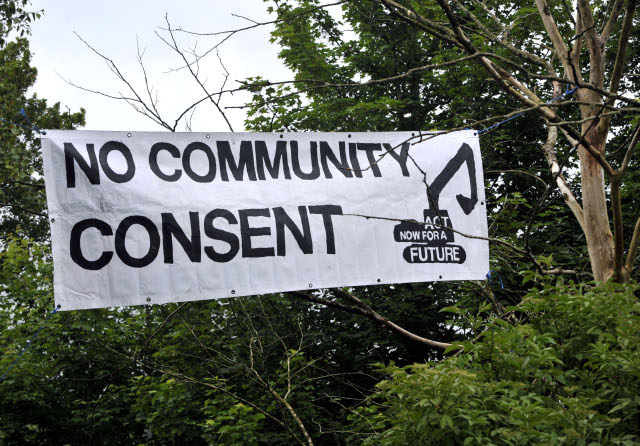 Ireland: The Camp for Climate Action in Ireland ran for a week and saw several direct actions alongside workshops. The site was taken at Shannonbridge, Co.Offaly on Saturday 15th August and alongside education and action planning, aimed to draw attention to the climate impact of the ESB-owned power station in Shannonbridge where peat, the most climate-polluting fossil fuel used in Ireland, is burned for electricity. On 18th August campaigners took direct action at a nearby bog by filling in trenches that are used to drain the area before peat cutting.

According to a spokesperson for the camp "Intact peat bogs actually absorb carbon dioxide from the atmosphere. This makes them an extremely valuable resource that we should be protecting. Instead Bord na Mona are ripping the heart out of our country to extract a dirty fossil fuel, and the ESB are buying it and burning it."

The camp ended on 22nd August with a march in Shannonbridge and actions shutting down two peat burning power stations. At Lanesborough peat burning power plant, activists locked themselves to the gates while another group entered the plant and carried out a banner drop on one of the buildings which read "Give Peat a Chance." Two activists were arrested.
At midday another group of Climate Campers targetted a third power plant in Edenderry, owned by Bord na Mona. Five women dropped a banner from the power station's conveyor belt which read “Climate Justice Now!" [see Indyemdia Ireland for pics and reports]


Wales: Climate Camp Cymru took place on the edge of Merthyr Tydfil, next to the controversial Ffos-y-Fran opencast coal mine, where local residents have been campaigning against the mine for 5 years, and which has been the site of previous direct action. The Climate Camp site was seized on 8th August with hundreds taking part for over a week of education, skillshare, training and action [Pics 1|2]. On Saturday 15th campaigners set off on a ‘climate stroll’ to the opencast mine, pursued by police - one man was arrested (also being bitten by a police dog) and held for 40+hrs, but successfully contested bail conditions which would have meant he could not attend the Climate Camp in London.

Angharad Jones said: “Reclaiming the land is a symbolic act. Coming here has been a real lesson for us, and we feel privileged to be part of the resistance to this mine. We have had talks from scientists and ecologists, but the most memorable lessons came from the local residents. History has shown that changes can be made by ordinary people doing extraordinary things. The suffragettes and the civil rights movement took action that was often illegal but very necessary. As our politicians fail us, we need deeds and not words. Between now and the Copenhagen climate summit in December, activists will take decentralised or collective action in Wales against the root causes of climate change".


Scotland: Climate Camp Scotland opened on 3rd August at Mainshill Wood in South Lanarkshire, where Scottish Coal (the UK’s largest open cast producer) has been given permission by South Lanarkshire Council to mine 1.7 million tonnes of coal. There are four other mines in the area, making it one of the most heavily mined areas in Europe. The Climate Camp was in support of the existing Mainshill Solidarity Camp and the Douglas Valley communities who for years have campaigned against the mine. The camp saw a week of education and low-impact living [see Pics + Audio | Video] and high-impact direct action against the root causes of climate change, when on 6th August anonymous activists disabled an enormous coal conveyor belt at the the Glentaggart opencast coal mine, that moves coal from the mine to Ravenstruther rail terminal where the coal is then sent to Drax power station in Yorkshire. Campers also protested outside South Lanarkshire Council offices on 10th August.

The Camp for Climate Action Scotland also released a document on the health impacts of open cast mining in the area entitled Adverse Effects of Opencast Mining [background]. Anna Craig from the camp said, “Coal means misery and death, not just for the thousands of people seriously affected by mining in South Lanarkshire but also in other disadvantaged communities around the world who are being hit first and hardest by climate change – the death toll is already at 300,000 people every year.”

Since the Scotland camp finished there are rumours that the Mainshill Solidarity Camp may be evicted soon. On 18th August police entered the site and got video footage of many of the defences, suggesting the authorities are gearing up for an eviction. There has also been a similar incident at Camp Titnore near Worthing.

Klimaatactiekamp: Climate Action Camp
Quote: "More than 400 people participated in (at least a part of) the camp, the atmosphere was great, and the actions were all very successful. There were actions against the nuclear central in Doel, against the meat industry, against the Lange Wapper bridge in Antwerp etcetera. During the day of mass action against coal, between 150 and 200 people succeeded in entering the terrain of ABT, a huge coal terminal, and blocked its activities for one day. The basis is laid for a strong mobilization towards Copenhagen, where the campaigners plan massive actions."

The Climate Action Camp that took place in the border area between Bergen op Zoom and Antwerp from the 3rd to the 9th of August is an example of an alternative and ecological way to organize a mobilization in all its aspects. Why did they do this camp? How did they manage to eat, have a medical and legal support, do their personal needs where there was nothing? What kind of people lived the experience? Here are the answers...
Video:  http://www.indymedia.be/nl/node/34384

CLIMATE CAMP - Wish you were here !
Climate Camp is up and running at Shannonbridge, Co.Offaly - started Saturday 15th August and goes on til Sunday 23rd August.
http://www.indymedia.ie/article/93570

PRESS RELEASE: "One chimney down, time to knock the other" - 14th August
http://www.climatecamp.ie/index.php?option=com_content&view=article&id=99:media&catid=51:media&Itemid=12

What the new Climate Camp Cymru can do for Wales - 12th August
http://www.guardian.co.uk/environment/blog/2009/aug/12/climate-camp-cymru-blog

Climate protest at opencast mine - 13th August
"These people are lovely people and they are coming here with their children - they are worried about climate change" - Resident Terry Evans
http://news.bbc.co.uk/1/hi/wales/8198012.stm

GALLERY: Scotland's first climate change camp at the site of an open-cast coal mine in South Lanarkshire
http://www.telegraph.co.uk/news/picturegalleries/uknews/5967054/Scotlands-first-climate-change-camp-at-the-site-of-an-open-cast-coal-mine-in-South-Lanarkshire.html

A climate of fear Inside the protest camp fighting opencast mining
http://www.sundayherald.com/news/heraldnews/display.var.2524596.0.0.php

Climate Camp Scotland: why we are protesting - 4th August, 2009
http://www.theecologist.org/blogs_and_comments/commentators/other_comments/297598/climate_camp_scotland_why_we_are_protesting.html